Just a Gigolo takes place just after World War I. When a war hero returns home to Berlin, he finds that there’s no place for him. Since he has no skills (other than what he learned in the army), he can only find menial, low-paying jobs. So, he decides to become a gigolo to lonely rich women. 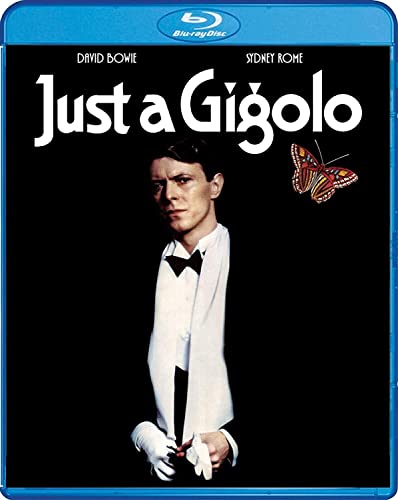 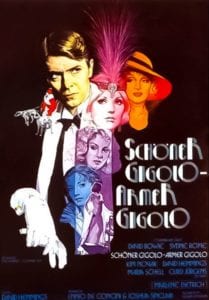 David Hemmings’ Just a Gigolo, starring the great David Bowie, is a wacky satire set in the steamy Prussian 20’s. In what the legend once called his thirty-two Elvis Presley movies rolled into one, Bowie plays Paul, a Prussian officer seeking fame and glory in the Great War. Moments after the end of the war, Paul is exploded by a belated bomb and rescued by an ally hospital (“We thought you were one of us!” cries his French nurse). Months later, Paul – carrying a yummy pig in his arms! –  returns to his home Berlin and finds it much changed. His family, disappointed to find him alive and therefore useless, is impoverished and his father immobilized by a Great-War-temper-tantrum stroke. So, Paul uncomfortably and unsuccessfully goes to work, while doing his best to avoid the loose morals and pretty hussies that crowd his path.

Since carrying towels and wearing papier-mâché are beneath an officer of rank, Paul happily accepts employment by his former superior from the trenches – an underground pre-Nazi played by Hemmings himself. Because of Hemmings’ violent sexual interest in Bowie (in the film, of course), Paul decides to leave his ambiguous political position and disappear for a few years.

When he returns to Berlin, looking “like a suicidal wildebeest,” Paul learns that his childhood playmate Cilly has adapted well to the sexy new culture. Cilly (properly named and played by Sydne Rome) is a famous and happily indecent actress who “doesn’t give a shit” about Paul, but successfully scores a night in his arms.

Later, on one of his lonely wildebeest nights, Paul discovers the Eden Hotel where Marlene Dietrich commands her army of gigolos. Paul has no usable skills, but he’s as cute as strudel! Dietrich offers him a job dancing the tango with elderly women. After a five-minute sugar baby relationship with Kim Novak, Paul begins his gigolo career and is immediately booked solid (to the surprise of no one).

While being a gigolo isn’t the most prestigious career, Paul is finally accustomed to the freewheeling society he feared. “You will be proud of me, Father,” swears Paul to the still-frozen old man. But after doing Princess Cilly one last time on her wedding night, Paul takes to the street and is peremptorily shot in a passing Nazi shoot-off. David Hemmings happily uses Paul’s body for his cause, giving the Nazi party an “honorable death” and Paul his post-mortem glory. The joyous news that Paul died by a bullet frees his father from paralysis, while bridal Cilly stares sadly on.

User Rating: Be the first one !
May 6, 2020
2 minutes read
Show More
Back to top button
Close
Close