Jeff and Karen Gaffney are a suburban couple who live at the end of blissful cul-de-sac in a neighborhood where everyone gets along. When a new mysterious couple moves into the neighborhood, Karen begins to become suspicious and starts to investigate. However, Jeff and Karen suddenly become embroiled in an international espionage plot when they discover that their seemingly perfect new neighbors are government spies.

‘Keeping Up with the Joneses’ Movie Summary 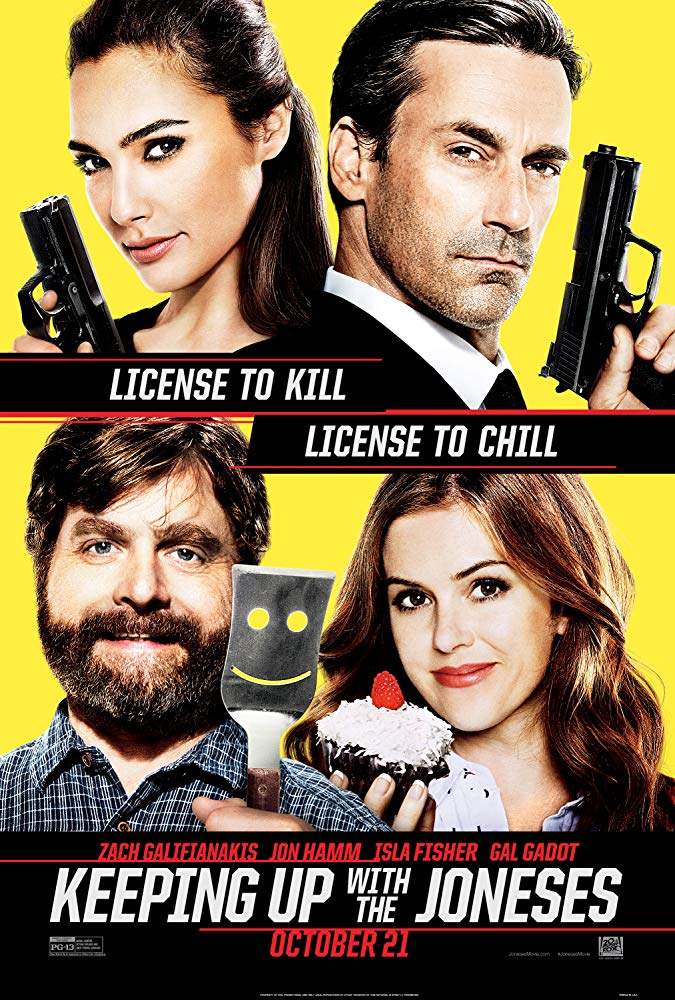 Jeff Gaffney (Zach Galifianakis) is a human resources officer at MBI, a company that has a defense contract with the United States government. Jeff lives in Atlanta with his wife Karen (Isla Fisher). The couple lives on a cul-de-sac with a group of neighbors that they are close to. Jeff and Karen’s two boys are away at camp for the summer and the couple is struggling with what to do in their empty nest.

One day, a new, mysterious couple moves into the neighborhood. Tim Jones (Jon Hamm) is a travel writer whose hobbies include glassblowing and exotic restaurants, and his wife, Natalie Jones (Gal Gadot) is a social media consultant, cooking blogger, and a philanthropist. The couple are extremely attractive and stylish and soon become the talk of the neighborhood. Tim and Natalie develop a fondness for the Gaffneys and provide Jeff and Karen with one of Tim’s glass figurines when they move in.

During a neighborhood block party, Karen catches Tim in Jeff’s den. As a result, Karen becomes suspicious of the Joneses. Shortly thereafter, Karen witnesses Natalie doing what looks like a dead drop at a neighborhood café. Karen follows Natalie to a mall, where Natalie confronts Karen in a dressing room while dressed in lingerie. Natalie diffuses the situation and helps Karen to express herself with some new clothes. At the same time, Tim takes Jeff to an underground restaurant that serves exotic snakes. The two engage in substantial drinking, but when Jeff is bitten by a deadly snake, Tim has to act quickly to save Jeff. Jeff shows his appreciation for the meal and the anti-venom by taking Tim to an indoor skydiving session. During their excursion, Tim asks Jeff about many of his co-workers at the office. One night, Tim sneaks into the MBI building with Natalie’s assistance to look at Jeff’s emails, finding a deleted email sent to someone by the codename of Scorpion.

Back at the Gaffney’s house, Karen tries to seduce Jeff with her new lingerie. However, Jeff becomes so excited that he knocks over and breaks the glass sculpture that Tim gave them. They find a bug within the broken pieces. Karen’s suspicions are reinvigorated by the discovery and she convinces Jeff to go with her to break into the Joneses’ house while they are away. They discover files on Jeff and the other MBI employees in the neighborhood. However, Jeff accidentally stuns Karen with a pen dart just as the Jones return home. The Jones discover the expended pen dart and suspect Jeff and Karen.

Jeff takes the bug and shows it to the head of security at MBI, Carl Pronger (Kevin Dunn). Pronger examines the bug and then sets a meeting with the Gaffneys to discuss his findings. When Jeff and Karen show up to the meeting, Pronger is killed with a bullet to the head by a sniper. Tim and Natalie show up and rescue the Gaffneys as the sniper tries to kill them. The Joneses engage in a gun fight with their pursuers, and they are able to escape.

At a diner after the car chase, the Gaffneys discover that the Joneses work for the CIA and are actually trying to discover whether there is an MBI employee working with Scorpion to sell government secrets. Tim and Natalie drop off the Gaffneys at their home, and Tim gives his neighbors some relationship advice. When the Joneses enter their house, it explodes.

The police investigate the explosion as the Gaffneys frantically plan to go into hiding, believing that they are the next targets. They are shocked when they find the Joneses in their basement, alive and well. The Joneses have kidnapped the neighbors, Dan and Meg Craverston (Matt Walsh and Maribeth Monroe). Dan works with Jeff at MBI in the top secret division. Tim informs Jeff and Karen that Dan has agreed to sell MBI’s experimental microchips to the Scorpion, an international arms dealer. Jeff answers Dan’s phone, posing as Dan when Scorpion calls, and sets a meeting to exchange the microchips.

Jeff and Karen go to a hotel to make the exchange, assured by Tim that they are safe. Tim and Natalie work back up from the roof and coordinate with other CIA agents. The Scorpion (Patton Oswalt) turns out to be a former MBI employee named Bruce Springstine, who recognizes Jeff. Tim radios for back-up when the Gaffneys cover is blown, but he is told that the operation has been aborted and that the Gaffneys are considered collateral damage. The Joneses disobey orders and attempt to rescue Jeff and Karen, but they are captured.

While they are captured, Karen is able to pass a knife to Natalie by distracting everyone by kissing Natalie. Natalie kills a henchman with the knife while Tim subdues another. The Joneses and Gaffneys are able to escape by jumping out of a window into the hotel pool. The briefcase with the microchips explodes, killing Scorpion and his henchmen. The Joneses drop the Gaffneys off at their home before returning to their life in espionage.

A year later, the Gaffneys are on vacation in Marrakesh. They visit a small café that Tim talked about and find Natalie and Tim sitting and having coffee. They discover that the Joneses are on a new mission when they pull out their guns and begin firing on some terrorists.