In King Kong vs. Godzilla, Mr. Tako is the chairman of a pharmaceutical company. When he learns some berries that grow on Farou Island are a miracle cure, he wants them at any cost. The natives on that island worship a god they call King Kong. They claim he’s grown to his giant size from eating those berries. Tako now figures Kong is the perfect way to promote his new product. So, he’s bringing Kong back with the berries too.

Meanwhile, as that expedition takes place, some American pilots discover Godzilla still frozen in the ice from the 1955 movie. In time, he rampages uncontrolled through the Japanese countryside as Tako brings Kong back to the mainland. When he breaks free too, and swims towards Japan, that leads him on a collision course with the mighty Godzilla. 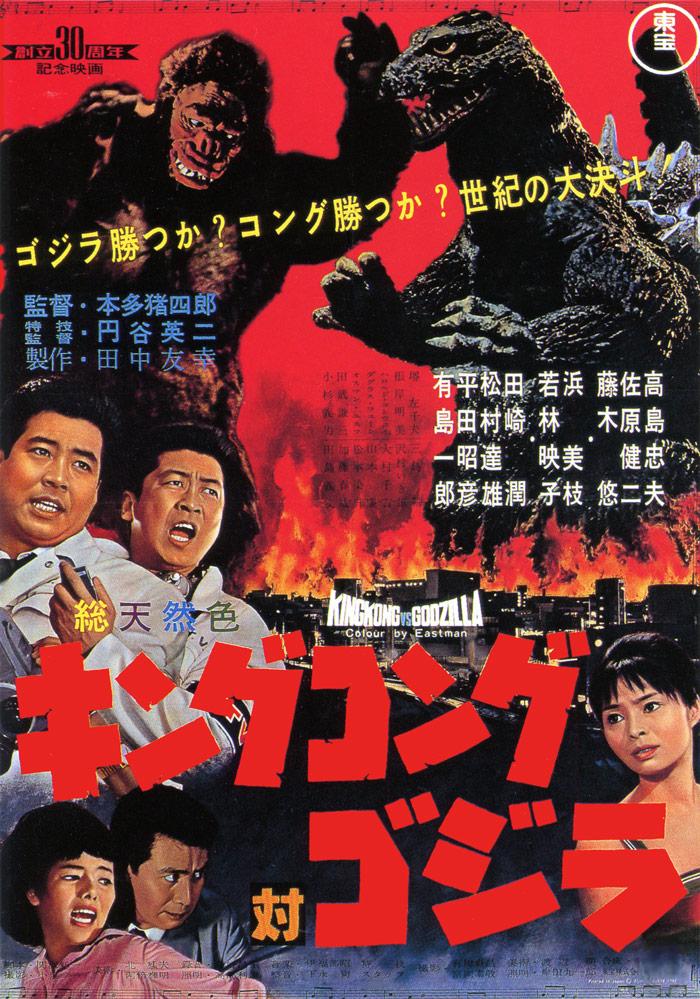 In King Kong vs. Godzilla, Eric Carter (Michael Keith) is a New York based news anchor, who introduces us to giant red berries, called Soma’s. You can only find them on Faro Island. As part of his report, Carter speaks to the audience about a giant, Godlike creature that also lives on this island. Mr. Tako (Ichirō Arishima), head of Pacific Pharmaceuticals, sends two of his employees to the Faro Island, to search for this monster. Mr. Tako wants to feature the monster in the television programs his company is advertising. Mr. Tako believes the monster will boost ratings—making him more money.

Tako’s two employees, Osamu Sakurai (Tadao Takashima) and Kinsaburo Furue (Yû Fujiki), make their way to the Faro Island. They are there to help the natives defend themselves from a giant octopus’ attack. As the octopus crushes its way through the village it searches for juice from the red berries. It’s only when the island’s Godlike monster arrives that the day is saved.

The monster, better known as King Kong, fights off the octopus with giant boulders, before the creature crawls its way out of the village. A victorious King Kong proceeds to get drunk on the juice from the red berries, and then passes out in the middle of the village. Sakurai and Kinsaburo stake claim to the massive ape in the name of Pacific Pharmaceuticals and it’s owner, Mr. Tako. They tie King Kong down to a giant raft and attempt to tow him back to Japan behind a giant ship.

The beasts head for Japan

While Tako attempts to get his prized ape back to Japan, an American submarine, The Seahawk, gets stuck in an iceberg located in 68 degree, radioactive waters off of Japan. As the submarine tries to break free from the iceberg, it helps, Godzilla, the King of all Monsters, escape from its ice-filled prison. Godzilla then proceeds to make its way back to Japan; destroying a military base and an entire railway system.

Before they can get King Kong to the mainland, the ape wakes up from its stupor, and breaks free from the raft. King Kong eventually rises out of the water, much like the legendary Kraken, and walks his way to the nearby Japan. While the military tries everything in their powers to fight off the titans and save human lives, the two monsters make their way towards each other for one climactic battle.

Initially, Godzilla gets the upper hand on King Kong. He slaps Kong with his gigantic tail, peppers him with massive boulders, and also shooting the ape with his radioactive breath. However, as an electric storm makes its way over Japan, Kong gets stronger. He begins to mount an offensive against Godzilla. The two continue to battle until a gigantic Earthquake sends the monsters into the ocean. King Kong rises from the deep to make his way back to Faro Island. Godzilla isn’t seen again, but news reports believe the monster has just returned to its underwater home—waiting to rise once again.