In this film based on the early lives of tennis sensations Venus and Serena Williams, Richard Williams raises his family in Compton, California with his wife Oracene “Brandy” Price. Richard believes that his daughters Venus and Serena have the potential to be the greatest tennis players in the world. He pushes his daughters to excel and constantly seeks ways to improve their game while also keeping them humble and kind. However, when the world discovers their talent, will Richard be able to provide his daughters with the guidance that they need? 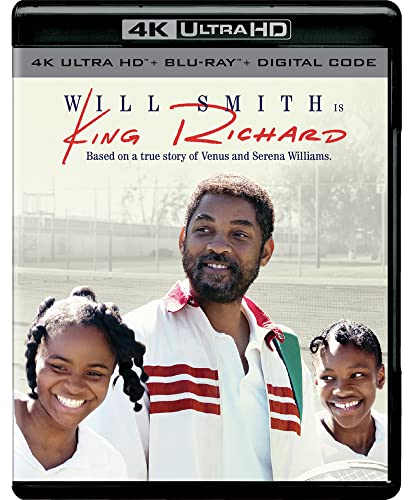 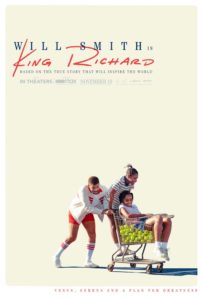 The film details a portion of the life of Richard Williams (Will Smith), the father of Venus (Saniyya Sidney) and Serena Williams (Demi Singleton). Richard and his family live in Compton California during the 1990’s. Richard lives with his wife Oracene “Brandy” Price (Aunjanue Ellis) and his three step-daughters. Richard believes that Venus and Serena have the potential to become phenomenal tennis players. He has planned for their success before they were even born and makes them practice every day. Richard drives his daughters on during the day and works as a security guard during the night. Richard realizes that his daughters need to have a professional coach, and he constantly sends out brochures and videotapes to well-known coaches hoping that they will take an interest in Venus and Serena. However, Richard has no success in securing a coach for the girls.

One day, Richard takes the girls to see coach Paul Cohen (Tony Goldwyn) who is in the middle of a practice session with John McEnroe (Christopher Wallinger) and Pete Sampras (Chase Del Rey). Paul is impressed with the girls and their overwhelming raw talent. Richard cannot afford to pay Paul his usual coaching fee, but Paul agrees to coach one of the girls for free. Paul chooses to coach Venus with Richard acting as a observer. Richard notes what Paul teaches Venus, and then has Brandy coach Serena with the same drills.

After coaching Venus for some time, Paul encourages Venus to participate in juniors’ tournaments. Venus immediately has success in the tournaments, but Richard drills into both of his girls the need to remain humble despite their success. During one of the tournaments, Serena secretly signs up to play unbeknownst to her parents. She too has immediate success. The girls continually dominate the tournaments that they play in, but the Williams family continues to be treated as outsiders among the predominately white and upper-class tennis tournaments. Richard meets with high-profile agents who wish to sign Venus and Serena to lucrative contracts. However, Richard fears that his daughters will be taken advantage of and reflexively pulls the girls out of the juniors’ circuit so that they can concentrate on their educations. Paul warns Richard that his actions may destroy the girls’ chances to turn professional in the future. Richard stands his ground and fires Paul as Venus’ coach.

The most strongest, the most powerful, the most dangerous creature on this whole earth is a woman who knows how to think. Ain’t nothing she can’t do. Richard Williams (Will Smith)

Sometime later, Coach Rick Macci (John Bernthal) travels to California to see the Williams girls play. The nationally recognized coach is impressed with their ability and agrees to take on the girls as a coaching project. The entire Williams family relocates to Florida to train at Rick’s facility. Rick is surprised when Richard reiterates that he will not let the girls play in the juniors’ circuit. Richard insists that the girls should train and attend school like normal children their age.

Over the next three years, Rick and the media begin to speculate about Richard’s strategy for the girls and pontificate that Richard’s true motives are to gain notoriety for himself. One day, Venus informs Rick that she wants to turn professional. Richard opposes the decision, but ultimately, he reluctantly agrees. However, Richard reneges on the decision in fear that Venus will suffer the same fate as Rick’s other young protégé, Jennifer Capriati (Jessica Wacnik), who is suffering from burnout and has been arrested for drug possession. Venus is angry with her father for holding her back, and Richard’s decision strains his relationships with Brandy and Rick as well.

Brandy confronts her husband, and the married couple argues. In the aftermath, Richard reconciles with Venus and agrees to let her play in the upcoming Bank of the West Classic in Oakland, California. Just before the tournament, the Williams family meets with a Nike executive who offers them a major sponsorship deal worth three million dollars. Rick strongly encourages Brandy and Richard to accept the deal, but the family collectively agrees to decline the generous offer. Richard believes that once Venus begins to play professionally that she will generate even more lucrative offers.

Venus plays in the tournament and initially struggles with her match against Shaun Stafford (Kaitlyn Christian). However, she eventually calms down and wins the match. Later, she has a match against the top seeded Arantxa Sánchez Vicario (Marcela Zacarías). Venus wins the first set and takes an early lead in the second set before Vicario requests a bathroom break. Vicario takes a long break in an act of gamesmanship which throws Venus off her game. Ultimately, Vicario rebounds and takes the second set and eventually, the match. Richard and Brandy support their devastated daughter and remind her to be proud of her performance. As the family leaves the stadium, a large crowd of supporters are waiting to cheer her on. Rick informs Richard that several shoe companies have requested to meet with Venus about sponsorship.

In an epilogue, the film reveals that nine months later, Venus would sign her first contract with Reebok for $12 million at the age of fifteen. Venus would go on to win Wimbledon five times and become the first African American woman to be ranked number one in the world. It is also revealed that Serena would become a 23-time Grand Slam champion and considered one of the greatest tennis players in history. Just as her father predicted.