Based on the comic book The Secret Service, the film details the Kingsman, a secret agency whose sole purpose is to save the world. Agent Harry “Galahad” Hart recruits troublemaker Gary “Eggsy” Unwin to join the agency when a new threat arises to threaten the world. While Eggsy undergoes his training, Harry investigates billionaire philanthropist Richmond Valentine who may have an agenda to kill nearly every person on the Earth. 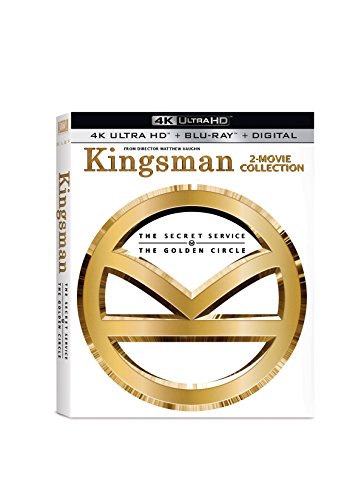 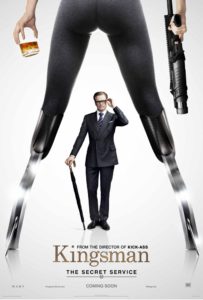 The year is 1997. Kingsman agent Harry “Galahad” Hart (Colin Firth) is on a mission with a probationary secret agent Lee Unwin (Junno Davies). Lee jumps onto a grenade to save Harry from an explosion. Lee is killed by the explosion, and Harry blames himself for the man’s death. Harry visits Lee’s widow, Michelle (Samantha Womack), and his young son Gary “Eggsy” Unwin (Alex Nikolov), and tells them about Lee’s death. He presents Eggsy with an engraved medal with an emergency assistance number on the back.

Seventeen years later, Professor James Arnold (Mark Hamill) is being held captive by a group of thugs in Argentina. A Kingsman known as Lancelot (Jack Davenport) arrives to save the professor. Lancelot kills the nameless thugs before helping himself to a drink. Lancelot answers a knock at the door and is cut down the middle of his body by a woman with bladed prosthetic legs known as Gazelle (Sofia Boutella). Gazelle works for billionaire Richmond Valentine (Samuel L. Jackson) who arrives and frees Professor Arnold. The trio all leave together to parts unknown.

At the same time, Eggsy is now in his 20’s and still lives with his mother and her new husband Dean (Geoff Bell). Eggsy has dropped out of training for the Royal Marines despite his exceptional intelligence and physical skills. Eggsy and his stepfather do not get along, and Eggsy gets arrested for stealing one of Dean’s friend’s car. Eggsy calls the number on the back of the medal from the police station and a short time later, Harry arrives and arranges for Eggsy’s release. Harry explains that he is a member of the Kingsman, a private intelligence service founded by British elite who put their money and lives towards protecting the world. Harry explains that the organization is named after the tailor shop on Saville Row which acts as a front for one of their bases of operations. Harry explains that a position has become available due to the untimely death of Lancelot and invites Eggsy to test for the position. During their conversation, Eggsy and Harry are accosted by some of Dean’s friends in a pub. Harry dispatches them all in short order before leaving Eggsy to make his decision.

Eggsy returns home and gets into another fight with Dean. Harry hears the fight through a microphone that he planted on Eggsy’s shoulder. Harry speaks into it and tells Dean to let Eggsy go or he will report Dean for his various crimes. Eggsy runs from the flat and is pursued by several of Dean’s gang which he easily eludes. Eggsy goes to tailor shop and decides to join the Kingsman since he has nothing to lose. They take an underground shuttle where Eggsy joins a class of recruits.

Meanwhile, Kingsman’s electronics expert, Merlin (Mark Strong), discovers that Professor Arnold is working as if he was never kidnapped. Harry meets with the professor at the Imperial College London and attempts to interrogate the man. However, a microchip in Professor Arnold’s neck explodes and kills him. The detonation signal is traced to a facility owned by Valentine. Merlin and Harry’s investigation discovers that Valentine has offered everyone in the world SIM cards that grant free cellular and Internet connectivity. Harry goes undercover as a billionaire philanthropist to meet with Valentine and to learn what he is up to.

I’m a Catholic whore, currently enjoying congress out of wedlock with my black Jewish boyfriend who works at a military abortion clinic. So, hail Satan, and have a lovely afternoon, madam. Harry Hart (Colin Firth)

Back at the training center, each of the recruits are eliminated one by one through various training tests run by Merlin. The last two recruits are Eggsy and Roxanne “Roxy” Morton (Sophie Cookson), a recruit that Eggsy has befriended during the training. The final test is to shoot a puppy that each of the trainees have raised during the process. Eggsy refuses to shoot the Pug puppy he was assigned, but Roxy follows through and is named the new Lancelot. Harry later reveals to Eggsy that the bullet is blank and that it is a test of will and determination.

Meanwhile, Harry discovers a connection between Valentine and a church hate group in Kentucky and travels there to investigate. Hart wears a set of glasses that broadcasts a signal back to Kingsman headquarters that Eggsy, Merlin, and Arthur (Michael Caine), the leader of the Kingsman, each observes. During the services, Valentine activates the SIM cards in the church which causes the parishioners, along with Harry, to become murderously violent. At the conclusion of the signal, Harry is the only survivor in the church. Outside the church, Valentine explains to Harry what happened before shooting Harry in the face, apparently killing him.

Angered over Harry’s death, Eggsy returns to Kingsman headquarters and confronts Arthur about Valentine. Eggsy notices that Arthur has a scar on his neck similar to Professor Arnold’s. Arthur reveals that Valentine plans to transmit the “neurological wave” worldwide via his free satellite network. Arthur explains that the resulting mass genocide will avert humanity’s extinction from global warming. Arthur informs Eggsy that only those chosen by Valentine will be unaffected. During the conversation, Arthur attempts to kill Eggsy by poisoning his drink, but Eggsy is wise to the plan and switches the glasses. Arthur dies from his own poison.

Eggsy joins Merlin and Roxy in their plan to stop Valentine. Roxy uses high altitude balloons to destroy one of Valentine’s satellites which breaks up the network temporarily. Valentine finds a replacement, but the delay allows Merlin to fly Eggsy to Valentine’s base, where Eggsy masquerades as King. Eggsy’s identity is revealed by a failed Kingsman recruit, Charlie Hesketh (Edward Holcroft). Eggsy electrocutes Charlie with his ring, before engaging in a firefight with Valentine’s men. Valentine activates the signal on his reestablished network and chaos ensues across the world. Eggsy suggests that Merlin activate the implanted chips placed in the necks of those in the building, which he does.

In a mid-credits scene, Eggsy takes up the mantle of Galahad in Harry’s honor. He gives his mother and his half-sister a new home away from the abusive Dean. Dean is knocked out by Eggsy in the same way that Harry knocked out Dean’s goons earlier in the film.