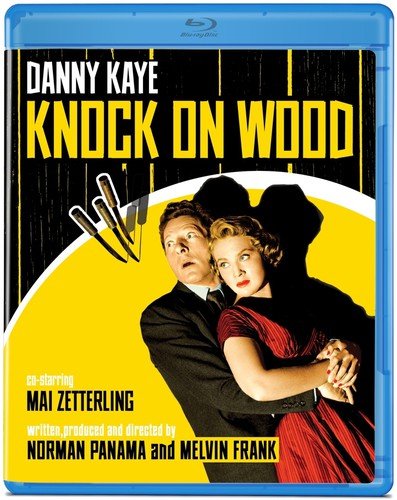 Olive Films has announced the addition of the comedy Knock On Wood to its upcoming slate of Blu-ray releases. The film was written and directed by Melvin Frank and Norman Panama and starred Danny Kaye, Mai Zetterling, Torin Thatcher, David Burns, and Leon Askin. Knock On Wood will be available for purchase online and in stores beginning on August 20th.

The film casts Danny Kaye as a neurotic American ventriloquist performing in Europe. In a parody of the 1946 thriller Dead of Night, Kaye is unable to control the words coming out of his dummy, resulting in a near-nervous breakdown. His manager and best friend (Burns) orders him to see a famous psychiatrist in Zurich. What follows is a zany adventure involving secret weapons, international spies and the beautiful Mai Zetterling. The film was released in July of 1954. Knock On Wood was nominated for an Academy Award for Best Writing, Story and Screenplay.

Disclaimer: Affiliate links are contained in this post. This means when you click a link, and purchase an item, Movie House Memories will receive an affiliate commission. Advertisers and Affiliate Partnerships do not influence our content. See our Terms of Use about the inclusion of affiliate links on this site for more information.
July 8, 2013
263 1 minute read
Show More
Subscribe
Login
0 Comments
Inline Feedbacks
View all comments
Most Recent Posts
Facebook Twitter LinkedIn Tumblr Pinterest Reddit
Back to top button
Close
wpDiscuz
0
0
Would love your thoughts, please comment.x
()
x
| Reply
Close