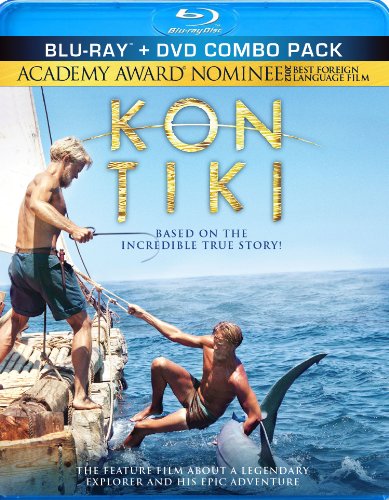 Anchor Bay Home Entertainment and The Weinstein Company have announced the addition of Kon-Tiki to their upcoming slate of Blu-ray releases. The film is directed by Joachim Rønning and Espen Sandberg. It stars Pål Sverre Hagen, Anders Baasmo Christiansen, and Gustaf Skarsgård. The screenplay is written by Petter Skavlan. Kon-Tiki will be available for purchase online and in stores beginning on August 27th.

On the 28th of April 1947, Thor Heyerdahl leaves his wife and children behind to cross the Pacific Ocean on a balsa wood raft called Kon-Tiki, with five inexperienced crew members. The Norwegian anthropologist and adventurer travels on the raft from Peru to Polynesia to prove that people from South-America settled in Polynesia instead of people from Asia, as was believed at the time. The crew did not pack any modern technology on board of the raft, except for a simple radio, and were accompanied by only each other and a parrot. With the world media watching, the crew navigates the Kon-Tiki across the Pacific Ocean using the stars and being driven by the currents and wind.

While taking on thunder storms, sharks and the dangers of the wide open sea, it’s six brave men against nature trying to get the Kon-Tiki across to the Polynesian shore. After gambling all he has, including his marriage, Heyerdahl is determined to succeed. Thor Heyerdahl’s documentary over the journey won an Oscar in 1951 and is the only Norwegian movie to have won an Oscar to date. The book Heyerdahl wrote about the Kon-Tiki expedition was translated into 70 languages and has sold over 50 million copies over the entire world.

Anchor Bay Home Entertainment and The Weinstein Company have not released any details concerning the exact tech specs and special features that will be included with the disc.

Disclaimer: Affiliate links are contained in this post. This means when you click a link, and purchase an item, Movie House Memories will receive an affiliate commission. Advertisers and Affiliate Partnerships do not influence our content. See our Terms of Use about the inclusion of affiliate links on this site for more information.
July 7, 2013
315 1 minute read
Show More
Subscribe
Login
0 Comments
Inline Feedbacks
View all comments
Most Recent Posts
Facebook Twitter LinkedIn Tumblr Pinterest Reddit
Back to top button
Close
wpDiscuz
0
0
Would love your thoughts, please comment.x
()
x
| Reply
Close