In the early 1970’s, a group of scientists, soldiers, and adventurers journey to a mysterious island called Skull Island with the intent to study the theory of Hollow Earth. Once there, they encounter a 100-foot tall ape who attacks and destroys their helicopters. Now the survivors must battle their way through the vast dangers that exist on the island while avoiding the giant ape known as Kong. However, they soon find out that their salvation may only lie with joining forces with the beast that nearly killed them all. 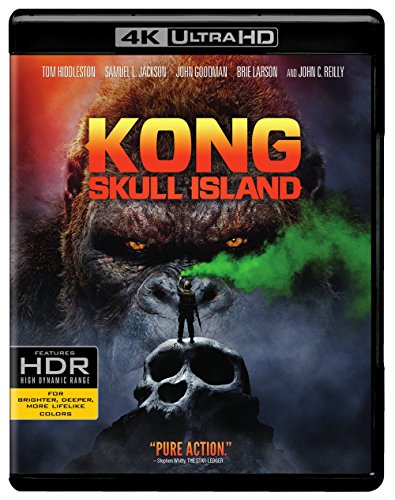 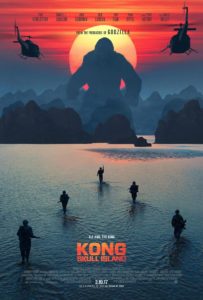 In 1944, two World War II fighter pilots engage in a dogfight over an island in the South Pacific. The planes are damaged and American pilot Hank Marlow (Will Brittain) and Japanese pilot Gunpei Ikari (Miyavi) parachute onto the island where they continue their battle hand to hand. However, their fight is suddenly interrupted by the appearance of a giant 100-foot tall ape.

Upon arriving at the island, Packard’s men begin dropping seismic explosives from helicopters that were developed by Randa’s seismologist Houston Brooks (Corey Hawkins). The explosives are designed to map out the island and prove Brooks’ Hollow Earth theory. However, the helicopter unit encounters a 100-foot tall ape who attacks and disables most of the helicopter convoy. The survivors of the attack are split into two groups with Conrad and Weaver leading one group and Randa and Packard leading the other. Packard searches for additional survivors from his men, specifically a transport helicopter piloted by Major Jack Chapman (Toby Kebbell) that contains weapons that could be used against the ape.

Specifically, he warns the survivors about a group of subterranean reptilian creature that he calls Skullcrawlers who are responsible for killing Kong’s entire species, leaving the giant ape as the last of his kind. Marlow informs Conrad and Weaver that the Iwi believe that if Kong dies, a giant Skullcrawler will awaken and ravage the island. Marlow also tells them that Ikari was killed by a Skullcrawler. At the same time elsewhere on the island, Chapman is killed and eaten by a Skullcrawler.

Conrad and Weaver formulate a plan to make it to the shore of the island to establish better communication with the transport ships at sea. They use parts from Marlow and Ikari’s crashed planes to rebuild a boat. Marlow joins their group and they proceed down the river. During the journey, they lose another man to giant carnivorous birds, but they do reestablish communication with Packard’s group. Once they reunite with Packard and his men, Packard insists on finding Chapman before they leave the island.

Now on foot, Marlow leads the group through a killing field filled with the skeletons of many of the Skullcrawlers’ victims, including Kong’s family members. The group is attacked by the Skullcrawler that attacked Chapman. Randa and a few others are killed before Weaver triggers a gas explosion that kills the Skullcrawler and reveals Chapman’s body. Confronted with Chapman’s death, Packard still refuses to leave the island until he kills Kong and avenges the death of his men. Marlow and Brooks attempt to explain that killing Kong would allow the Skullcrawlers to run rampant over the island. The soldier refuses to listen, focused on his revenge.

The group splits into two again. Packard’s group retrieves the weapons from Chapman’s downed chopper and lays a trap for Kong in a nearby lake. The non-military personnel head back to the boat to once again head for the shoreline. Along the way, Conrad and Weaver encounter Kong close-up as he walks in the river. They note his truly peaceful nature when he is not threatened. The pair resolve to stop Packard and save Kong.

Meanwhile, Packard’s group lures Kong to the lake by using the remaining seismic charges. Once there, Packard tries to incapacitate Kong with ignited napalm. Conrad, Weaver, and Marlow arrive at the kill zone and successfully lobby the other soldiers to let Kong live. However, Packard is dead set on killing Kong. Suddenly, a giant Skullcrawler emerges from the lake, just as Kong crushes Packard. The Skullcrawler fights and ultimately overpowers Kong. The humans intervene to help Kong, who wins the battle with their assistance. The survivors are able to leave the island as Kong peacefully watches them leave.

Once back in the United States, Marlow reunites with his wife and meets his adult son (Will Brittain) for the first time. Monarch detains Conrad and Weaver to debrief them. San Lin (Jing Tian) and Brooks attempt to recruit the pair to work for Monarch and inform them that Kong is not the only monster king on the planet. They show them archive footage of cave paintings depicting Godzilla, Mothra, Rodan, and King Ghidorah. The final image shows Godzilla and King Ghidorah in battle.