When his dysfunctional family clashes over the holidays, young Max gets disillusioned and turns his back on Christmas. Meanwhile, this lack of festive spirit unleashes the wrath of Krampus: a demonic force of ancient evil intent on punishing non-believers. All hell breaks loose as beloved holiday icons take on a monstrous life of their own, laying siege to the fractured family’s home and forcing them to fight for one another if they hope to survive. 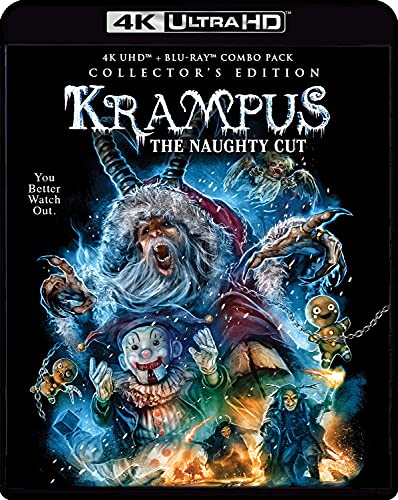 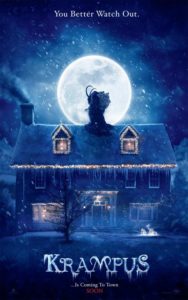 The Engel family makes preparations for the arrival of some unwanted family three days before Christmas. The workaholic Tom (Adam Scott) and his perfectionist wife Sarah (Toni Collette) dread the arrival of Sarah’s sister, Linda (Allison Tolman), and her family. Tom and Sarah’s two children, Beth (Stefania LaVie Owen) and Max (Emjay Anthony), also dread the arrival of their relatives due to the damper that it puts on the Engel holiday celebration.

Max is still a firm believer in Santa Claus and intends on sending him a letter to make his requests for Christmas. Teenage Beth is more interested in her phone and social life than spending time with any family. Also living in the house is Tom’s mother, Omi (Krista Stadler), who speaks mostly German and spends most of her time cooking. Linda shows up with her husband Howard (David Koechner) and their four children, Howie Jr. (Maverick Flack), Stevie (Lolo Owen), Jordan (Queenie Samuel), and the baby Chrissie (Sage Hunefeld). Unfortunately, Linda also brings Sarah’s cantankerous Aunt Dorothy (Conchata Ferrell), whom nobody likes.

Despite the tension in the house, Max wants to continue the family traditions, something that pleases Omi. However, all the Christmas spirit is sucked out of the house by the arrival of the extended family members. Stevie and Jordan notice Max’s letter to Santa in his pocket and steal it. During dinner, the two girls read Max’s letter which angers nearly everyone, especially Max. Tom tries to comfort his son by telling him that to continue to love his family despite the chaos and then gives him his letter back. Still angry of being made fun by Stevie and Jordan, Max rips up his letter to Santa and throws it out the window into the snow. The remains of the letter are picked up by the wind and swept up into the sky.

That night, a severe blizzard engulfs the town, causing a power outage in the Engel neighborhood. The house is left without power or heat. The lack of amenities and cold further drives up the tension in the house. Beth goes out into the storm to visit her boyfriend’s house to check on him. She encounters a large, horned creature that chases her through the storm. She attempts to hide underneath a delivery truck whose driver has been killed by something unseen. The horned beast leaves a small jack-in-the-box toy next to the truck, and when the toy opens, it captures Beth.

A short time later, Tom and Sarah begin to worry about the tardy Beth. Tom and Howard leave in Howard’s vehicle to search for the missing teen. They find her boyfriend’s house frozen over and in ruins, with the chimney split open and large goat-like hoof prints in the house. They hear a cry, which they believe to be Beth, and charge outside into the storm. Once outside, the two are attacked by some unseen monster underneath the snow. Howard is bitten, but Tom chases off the unseen creature by firing Howard’s shotgun into the snow. Howard’s truck is destroyed by something unseen, and the two men limp back to the Engel house and begin boarding up the windows and doors.

In the house, Omi constantly keeps the fire burning hot in the fireplace as if she is trying to keep something away. Tom and Howard take turns keeping watch while the rest of the combined families sleep together in the living room. During the night, Howard falls asleep and a mysterious chain with a long hook descends down the chimney towards the ashes of the once roaring fire. The chain contains a gingerbread man which the constantly hungry Howie Jr. grabs and takes a bite of. The gingerbread man is actually alive and binds Howie Jr. with the chain. As something attempts to pull the boy up the chimney, the rest of the now awakened family tries to pull him back, but they fail.

Once the fire is restarted, Omi explains that the creature that is hunting them is called Krampus, an ancient demonic spirit who punishes those individuals who have lost their Christmas spirit. Omi tells a tale of when she was a child when her parents and community lost their Christmas spirit due to the hardships of World War II. Omi, the last remaining hold out, finally lost her Christmas spirit, which resulted in Krampus being summoned. The demon dragged everyone in her village down into Hell, leaving only herself to tell the tale. Krampus also left behind a little bell with his name on it.

The family is skeptical of Omi’s horror story, but when demonic toys begin appearing throughout the house, they begin to believe her. Stevie and Jordan are lured into the attic by what they believe is Beth’s voice. Jordan is swallowed by Der Klown (Brett Beattie), the jack-in-the-box from before now grown to enormous size. Howard fights off a trio of gingerbread men with a nail gun in the kitchen with a little help from his dog. Tom, Sarah, and Linda fight a trio of toys in the attics and manage to save Stevie from the jack-in-the-box.

Everyone returns to the living room near the fireplace to make their last stand. Krampus’ evil elves come crashing through the windows and take Dorothy, Howard, and Chrissie with them. Tom decides that the family should make their escape in an abandoned snowplow that was left down the street after the driver was killed by Krampus. As everyone heads out into the storm, Omi stays behind to distract Krampus. The large demon emerges from the fireplace and attacks Omi with his bag of evil toys.

Outside, Tom, Sarah, Linda, Max and Stevie struggle through the storm to get to the snowplow. The creatures under the snow return, and Tom stays behind with Howard’s shotgun to fight them off, knowing that he is sacrificing himself. Sarah and Linda are pulled under the snow by the mysterious creatures, and Stevie and Max make it inside the snowplow. However, Max cannot get it started. The elves return and abduct Stevie, but Max fights off the one remaining elf who tries to take him. Krampus arrives and gives Max a bell wrapped in a piece of his discarded letter to Santa Claus.

Max follows the demon, and sees Stevie tossed into a hole leading to Hell by the elves. A tearful Max apologizes for losing his Christmas spirit to Krampus, and tells the demon that he just wishes that it would be like it was before. Krampus appears to accept the boy’s apology and wipes a tear from his cheek. However, Krampus then grabs Max and tosses him into the hole to Hell as well.

Suddenly, Max awakens in his house on Christmas morning. His entire family is alive and downstairs celebrating Christmas. No one appears to remember the events of the night before, and Max writes it off as a nightmare. He begins to unwrap gifts and is presented with one that contains Krampus’ bell. The entire family stares at the bell as all of their faces show the realization that the nightmare was real. The camera pans out to show the family, and their house, are contained within a snow globe in Krampus’ workshop. The workshop is littered with dozens of snow globes and populated by Krampus’ evil toys.