In a fantasy adventure, set in a world peopled by creatures of myth and magic, a prince embarks on a quest to find the magical Glaive and then rescues his young bride. Colwyn is the leader of a mythical sword-and-sorcery group in pursuit of “the Beast” that has kidnaped his fiancé, Lyssa. 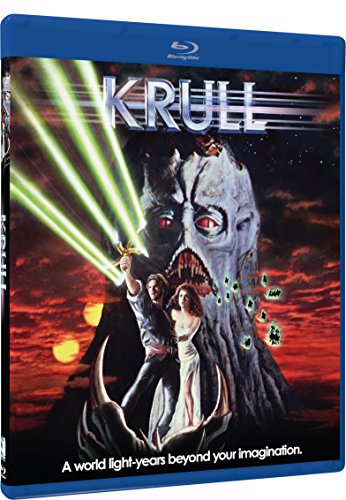 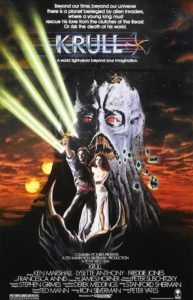 Krull opens to a prophecy that says a girl with an ancient name will become queen and she will choose a king and together, they will rule the world. Additionally, their son will grow up and rule the galaxy.

On the planet Krull, we meet Princess Lyssa (Lysette Anthony) after she’s chosen Prince Colwyn (Ken Marshall) to be her husband. Their union will unite Krull’s two kingdoms to defend the planet against an evil entity known as the Beast (Trevor Martin) who traverses the galaxy in a mountain-like spaceship called the Black Fortress.

As their wedding ceremony commences, the Beast orders his army of Slayers to kill everyone at the wedding except for Princess Lyssa. He wants to marry her so that HIS son will rule the galaxy. The Slayers attack before the young couple can complete the ceremony. In the melee, the Slayers kill both kings, destroy their armies, and nearly kill Prince Colwyn before kidnapping the princess.

Ynyr, the Old One (Freddie Jones) arrives to the castle in the aftermath where he finds Colwyn alive and he heals him. Ynyr then tells him Colwyn can kill the Beast with an ancient, magical, five-pointed throwing star called the Glaive. First though, Colwyn must scale a tall mountain and stick his hand in molten lava to retrieve it where it rests.

Once Colwyn does that, the two men set out to find the Black Fortress. Unfortunately, the Black Fortress teleports to a new location every day at sunrise to keep the Beast safe. Along the way, the two befriend Ergo “the Magnificent” (David Battley ) and a group of nine recently-escaped thieves, bandits, and brawlers. As the new king, Colwyn says he will clear their criminal records in exchange for their help.

The gang heads over to the home of a blind man Ynyr knows named the Emerald Seer (John Welsh)and his young apprentice named Titch (Graham McGrath). The Emerald Seer uses a crystal to find out where the Fortress will next rise, but before he learns the location, the Beast’s hand magically appears and crushes the crystal. The Emerald Seer says there’s a nearby swamp that the Beast’s magic can not reach, so they travel there. However, the Beast turns the ground there to quicksand, but it only swallows Nennog. Then the Beast sends his Slayers to kill the group. They only kill Quain before a friendly cyclops named Rell (Bernard Bresslaw) shows up to repel the Slayers.

Ynyr says there is only one other person who can tell him where the Black Fortress will next be. She is an enchantress called the Widow of the Web (Francesca Annis). The group heads to her location until Ynyr says he must continue the rest of the way alone.

The group takes this opportunity to rest in the forest. One of Kegan’s wives, Merith (Clare McIntyre), lives in a nearby village and Kegan has her bring the men food. Merith has a helper named Vella (Belinda Mayne) whom the Beast puts under his spell. He uses her to seduce Colwyn so Princess Lyssa can watch her future husband cheat on her. Her seduction fails so the Beast has her kill Colwyn but that fails too and she dies.

Meanwhile, Ynyr arrives at lair of the Crystal Spider where a Crystal Spider guards the Widow’s home—something like a giant spider egg. It turns out this Widow of the Web is an old woman named Lyssa whom Ynyr loved long ago. She was exiled to the lair after Ynyr left her and she killed their son in revenge because she couldn’t kill him.

The Widow reveals the Black Fortress location at the next sunrise and then sacrifices herself by giving Ynyr the sand from the enchanted hourglass which kept the Crystal Spider from attacking her all these years. It’s the only way Ynyr could escape alive to tell the men the fortress’s next location. However, the sand will also kill Ynyr when it runs out of his hand. As he flees, the Crystal Spider attacks and kills the Widow. Ynyr tells the men the next location and then dies as the the remaining sand from the hourglass slips from his hand.

Unfortunately, the Black Fortress’s next location is 1000 leagues (approximately 3000 miles) away. Rell says only Fire Mares can travel that distance in a day, so the group rounds up a nearby herd and heads to the Black Fortress before it teleports again.

When they arrive, Slayers try to keep the men from entering the fortress. They manage to kill Rhun before the fortress transports again. Rell sacrifices himself to hold open the spaceship door long enough to allow the others to enter before the doors close and crush him to death. The Black Fortress transports to a new location as the Slayers kill Menno and Darro inside. Kegan sacrifices himself to save Torquil as they shoot at him. When Ergo and Titch get separated from the others, Ergo magically transforms into a tiger to kill the Slayers and save Titch’s life.

Colwyn, Torquil, Bardolph, and Oswyn next find themselves before a large dome. Colwyn finally uses the Glaive and cuts through the dome’s wall to reach Princess Lyssa. As this goes on, the other three search for another exit. However, they fall through the wall which traps them in a narrow spike room thing which begins to close on them. The huge spikes grow longer from its walls and impale Bardolph to death while stabbing Torquil in the right arm.

The Glaive finally cuts through the dome and Colwyn reunits with Lyssa. He attacks the Beast with the Glaive and kills it. However, he can not retrieve the weapon after it becomes embedded in the Beast’s chest.

As Colwyn tries to pull it out, the Beast comes back to life. Colwyn thinks he no longer has anything to defend himself with but Lyssa realizes if they finish the wedding ritual, it will give them the united power to manipulate fire and slay the Beast—which they quickly do.

Colwyn and Lyssa kill the Beast and the Black Fortress begins to crumble. His spell over the spike room fades and Torquil and Oswyn escape. They reunite with Colwyn and Lyssa and then find Ergo and Titch before the entire building collapses on them. The fortress then fades from existence… or into space, whichever comes first.

Now safe and united in matrimony, Colwyn and Lyssa become the king and queen of the new kingdom. Torquil becomes their Lord Marshal and the film’s narrator repeats the opening line that the son of the queen and her chosen king will rule the galaxy.