In L’avventura, Anna is a wealthy Italian woman unsure of her feelings for her lover, Sandro. While on a yacht trip up the Sicily coast with some other upper-class friends including her best friend, Claudia, the group visits a deserted volcanic island. When the weather changes, they leave the island. However, Anna has vanished. Claudia, Sandro and another friend stay on the island during the night trying to find Anna, while the rest of the group returns. The next morning, the coast guard joins the search, but they do not find Anna either. Sandro and Claudia set out to search for Anna throughout Italy, and wind up falling in love along the way. 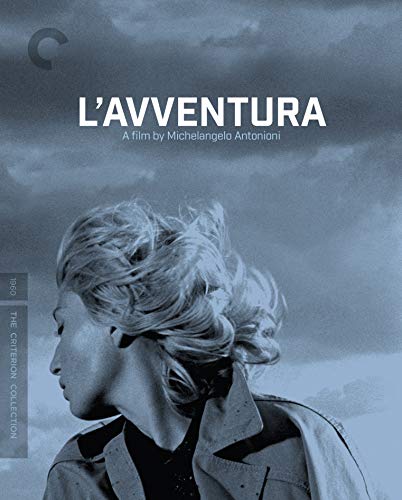 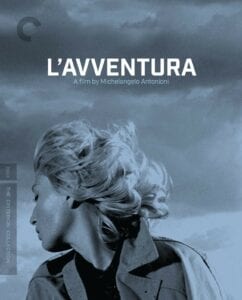 Out on the suburbs of Rome, Anna meets up with her friend, Claudia. They, along with Anna’s boyfriend, Sandro, and a few other wealthy couples, are about to set off on a weekend yachting trip to the Aeolian Islands north of Sicily. As the ladies drive to pick up Sandro we learn that things are not all well between the two lovers. At Sandro’s apartment, Claudia waits outside while Anna and Sandro have some awkward sex. The three then speed off to their destination.

The next day, the group has set sail around the islands. While the cruise should be pleasurable, it’s not for Anna who seems tortured with her thoughts. She jumps into the Mediterranean for a quick swim, and some others follow her lead, including Sandro. Anna quickly starts yelling that there is a shark in the water, causing a huge commotion, and everyone heads back to the boat, but the whole story is a lie. Anna made it up to get Sandro’s attention.

The group then docks, and goes ashore on one of the small islands where Anna confesses to Sandro that she’s tired of him running off on his long business trips. Sandro decides to ignore her, and take a nap on the rocks. He is woken up when the group wants to leave the island due to the weather turning bad, but Anna has disappeared. We learn this is not her first time doing something like this. It is actually quite typical of her. A boat is heard nearby as the group sets out across the tiny island to look for Anna, but she is nowhere to be found. Sandro, his friend, Corrado, and Claudia stay overnight while the rest sail off to get the authorities.

At sunrise the next day, Sandro, in many ways, seems over Anna as he begins to hit on Claudia. She, in return, rebuffs his advances, but not entirely. The police arrive with Anna’s father, and announce they have arrested a group of smugglers who are being held in Milazzo, a small town in northeast Sicily near Messina. Sandro gives Claudia a firm kiss goodbye as he heads out to that village. Claudia rushes off to look for Anna on one of the other nearby islands. Afterwards, everyone is to meet back at Corrado’s villa in Palermo.

It turns out that the smugglers know nothing, but Sandro discovers Claudia is there after finding nothing on the islands. He intercepts her at the train station as she boards the next one out to Palermo. This is the first time we discover that Claudia is actually attracted to Sandro as well, but her loyalty to Anna, and her commitment to finding her, complicates everything. She tells Sandro to get off the train, which he reluctantly does in Castroreale.

Sandro then returns to Messina to look for the journalist, Zuria, who wrote a story about Anna’s disappearance, but he finds the town’s men are aflame because the gorgeous 19-year-old starlet, Gloria Perkins is visiting, and all the fellas want a piece of her. Of course, Sandro gets a rager for her too. As things calm down, Sandro does find Zuria, who tells him that Anna was spotted just southwest of the town in a village named Troina, and off again Sandro goes.

Back at the villa in Palermo, everyone seems to had moved on with their horrid lives, and forgotten about Anna except Claudia. As Corrado’s lonely wife, Giulia, flirts with another man, Claudia reads a second article about Anna’s disappearance that Sandro bribed Zuira to write. She too heads off to Troina for clues.

By the time she arrives, Sandro has already questioned the man who claims to have sold tranquilizers to Anna, and says she left on a bus to the town of Noto in the southeastern tip of Sicily. Claudia goes with him, but they stop to off at a deserted village outside of the town admire the scenery. They end up making sweet, sweet Italian love as the trains pass by.

They then continue on to Noto, and Sandro talks to the people working at a hotel where they think Anna would have stayed. Claudia waits outside, and a horny group of men surround her; staring as if she’s the first beautiful woman they’ve ever seen. This freaks out Claudia, and things only get worse when she thinks sees Sandro exiting the hotel with Anna. She then flees to a paint store; confused by her feelings for Sandro, and her devotion to her friend, Anna. Sandro finds her in the store. He’s alone, and tells Claudia that Anna wasn’t there…or was she and he was lying?

They head over to a church rooftop where Sandro tells Claudia of his failed life as an architect, and asks Claudia to marry him. The next day, Claudia is in the best of moods. Both seem to be in love, but as Sandro takes a walk in the piazza, he knocks over some ink on an artist’s sketch for the hell of it. He then returns to Claudia and tries to bone her again, but she tells him they must leave.

They go to Taormina, and check into the San Domenico Palace Hotel where Sandro’s boss and his wife, Patrizia, are staying. She throws a huge party that Sandro attends, but Claudia does not. She stays in the hotel room to rest. At the party, as Sandro walks around, he sees Gloria Perkins, the hottie tottie that got Messina all aflutter, and sets out to bone her too.

When Claudia realizes Sandro hasn’t returned, she panics and wakes Patrizia fearing Anna has returned, and that she and Sandro are together. She frantically searches the hotel looking for him, and eventually catches him with his pants down atop of Gloria. As Claudia runs off, Sandro follows her to a terrace. He sits down on a bench, and begins to cry in silence. Claudia walks up behind him, and in a moment of compassion, puts her hand on his head in comfort, and the two gaze out at Mount Etna in the distance.