Legend tells the true story of London’s most notorious gangsters, twins Reggie and Ronnie Kray. As the brothers rise through the criminal underworld, Ronnie advances the family business with violence and intimidation while Reggie struggles to go legitimate for local girl Frances Shea. In and out of prison, Ronnie’s unpredictable tendencies and the slow disintegration of Reggie’s marriage threaten to bring the brothers’ empire tumbling to the ground. 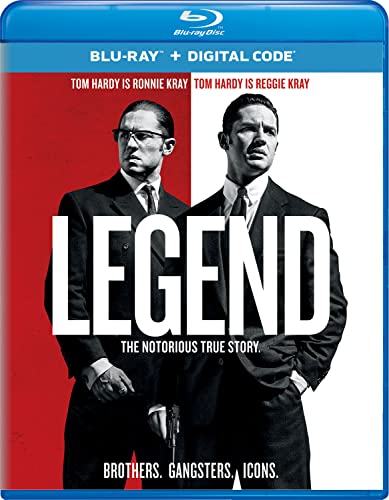 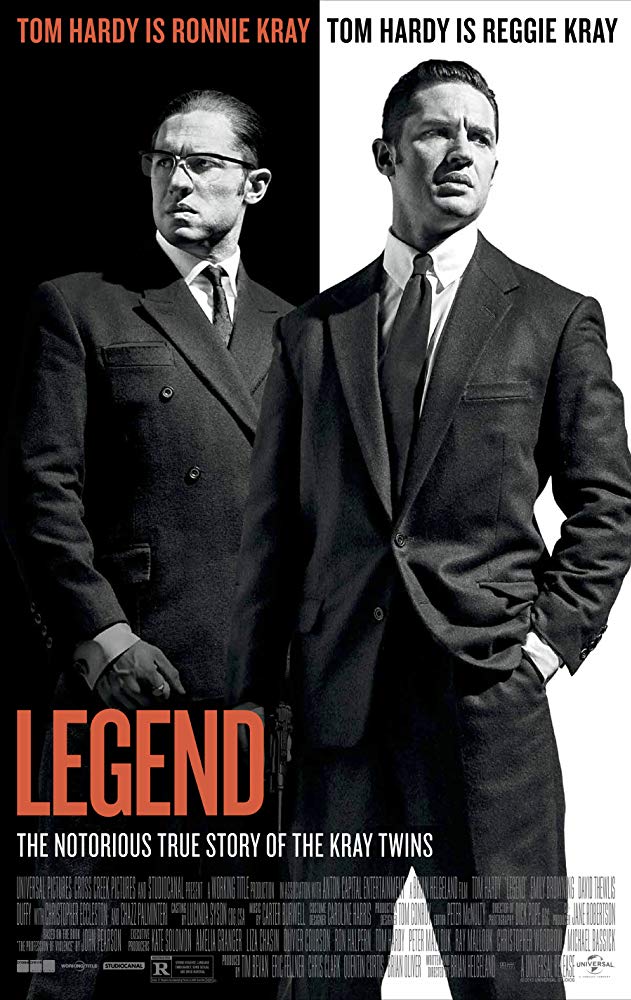 Legend is the true story of the Kray brothers, twin mobsters who briefly ruled the London underworld during the 1960’s. As the film begins, Reginald “Reggie” Kray (Tom Hardy) is a former boxer who has turned to crime. He, along with his brother Ronald “Ron” Kray (Tom Hardy), run a small crime organization known as The Firm in London. Ron is locked up in a psychiatric hospital for paranoid schizophrenia as the film begins. Reggie effectively threatens the evaluating physician to provide a favorable evaluation of his brother so that he can be released. The doctor emphasizes to Reggie that Ron is dangerous and needs to take his medication to remain under control.

Once Ron is released, the brothers work to control a large part of London’s criminal underworld. They use extortion and brutal violence to expand their criminal enterprise. They get into a gang war with another London gangster, Charlie Richardson (Paul Bettany), who leads the south London group called the Torture Gang. Eventually, Scotland Yard takes down Charlie and most of the Torture Gang allowing the Krays to expand their control even further.

Reggie enters into a relationship with Frances Shea (Emily Browning), the sister of one the Reggie’s drivers, Frankie Shea (Colin Morgan). Frances is drawn to Reggie despite the warnings of her mother (Tara Fitzgerald), and the couple soon are soon involved in a passionate relationship with each other. Frances does not approve of Reggie’s criminal involvement, and Reggie continually promises to go legitimate, but he never does. The couple eventually marry each other.

Shortly after the marriage, Reggie goes to prison for 6 months for a prior conviction that had been under appeal for some time. Ron takes over The Firm while his brother is gone. Ron’s mental instability and violent temperament lead to severe financial setbacks at the nightclub as he and his cronies, such as Edward “Mad Teddy” Smith (Taron Edgerton), remake the gang and the business based on their arbitrary whims. The financial setbacks put Ron in conflict with the chief financial officer for the gang, Leslie Payne (David Thewlis). The club is almost forced to close due to Ron scaring away all the customers. Once Reggie is released, Reggie and Frances visit the club and the brothers get into an argument. Ron insults Frances and Reggie and Ron have a violent, all-out fight. In the end, the brothers appear to patch things up and Reggie gets the gang back on track.

Soon after, the brothers are approached by Angelo Bruno (Chazz Palminteri), a member of a Philadelphia crime family and a representative of Meyer Lansky, the infamous American gangster. Bruno proposes that they engage in a deal where the parties will split gambling profits equally while the brothers provide local protection. The agreement is highly profitable and further expands their criminal operation.

However, the ongoing success of the gang continues to drive a wedge in between Reggie and Frances and increases the instability of Ron. After the remaining factions of the Torture Gang try to shake down some of the people under the Krays’ protection, Ron walks into a crowded bar and shoots George Cornell (Shane Attwooll) dead. The homicide causes Scotland Yard to open a full investigation into the brothers’ organization with the sole purpose of taking down the Krays. The leader of the task force is Detective Leonard “Nipper” Read (Christopher Eccelston) who has been trying to arrest the brothers for some time.

Reggie’s struggles to control his brother cause the gangster to increasingly turn to alcohol. The drinking and stress further exacerbate his marriage difficulties with Frances. On one occasion, a fight between the couple ends with Reggie beating and raping Frances. She decides to leave him, and Ron wishes her well, expressing that he and she are the only two people who truly love Reggie. At the same time, Bruno strongly hints that the American mob would like Reggie to kill his brother due to his increasing instability. Reggie says he cannot due to Ron being his brother.

Reggie tries to make things right with Frances. He tracks her down at Frankie’s flat and offers to start anew. He proposes a trip to Ibiza, someplace where Frances has always wanted to holiday. Frances reluctantly agrees, but then proceeds to take an overdose of pills later in the day, killing herself. Reggie is devastated by his wife’s death.
Ron hires a petty criminal Jack McVitie (Sam Spruell) to kill Payne for some imagined slight against Ron.

McVitie makes an attempt, but Payne is able to overpower McVitie and survives the assassination with only a gunshot wound to the leg. Payne is approached by Detective Read while in the hospital and agrees to cooperate with Scotland Yard in exchange for protection for his wife and family. Reggie finds out about the arrangement with McVitie and kills the petty thief after he makes disparaging remarks about Frances. McVitie’s murder occurs at a party in front of dozens of guests. When Ron confronts Reggie as to why he would do something so reckless, Reggie tells his brother because he can’t kill him.

The police arrest Reggie for McVitie’s murder and Payne’s information leads to the arrest of Ron for Cornell’s murder. The closing captions of the film state that both were convicted of murder. Reggie died in prison from cancer in 2000 and Ron died in a mental hospital from a heart attack in 1995.