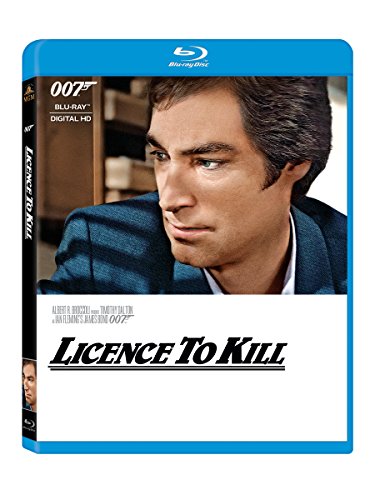 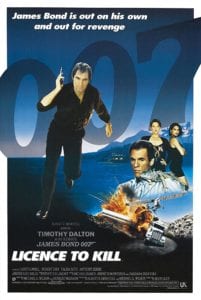 Instead of attending his wedding on time, Bond and CIA agent Felix Leiter track down a drug dealer, Franz Sanchez, and help arrest him. Sanchez repays Leiter by murdering his wife and feeding his leg to a great white shark.

This makes Bond angry, and he vows revenge. He and Leiter’s friend Sharky find a marine laboratory from which Sanchez ships cocaine into the US. But when the MI6 puts the kibosh on Bond’s efforts, he turns in his license to kill and sets off on his own. Bond then ruins yet another shipment of Sanchez’ and flies away with about $5 million in Sanchez’ money.

Bond teams up with a DEA informant that was working with Leiter. Played by Lowell. The two of them find Sanchez in Isthmus City. Bond poses as an assassin who is there totally not to kill Sanchez and gains Sanchez’ trust. Sanchez is meeting with big shots from Asia to create cocaine and gasoline franchises for $10 mill a pop. Bond is invited to the laboratory where the cocaine and gasoline are readied for smuggling.

However, Sanchez’ henchman recognizes Bond, and Bond makes his move, which is quickly foiled. Sanchez sentences Bond to die painfully down a chute in a plume of cocaine smoke, but is saved by Lowell. Sanchez escapes in a convoy of cocaine gasoline. But Bond pursues him and finally gets his revenge for Leiter when he sets fire to Sanchez.