A mission to investigate Halley’s Comet discovers an even stranger phenomenon: an alien spacecraft! Following a deadly confrontation, the aliens arrive on Earth, where their seductive leader begins a terrifying campaign to drain the lifeforce of everyone she encounters. Her victims, in turn, continue the cycle, and soon the entire planet is in mortal danger. And when the mission’s sole survivor (Steve Railsback, The Stunt Man) sets out to stop her, he comes face to face with the most beautiful – and most horrifying – being he’s ever known. Will he be able to destroy the vampiress … or will he become yet another victim of her fatal charm? (Courtesy Shout Factory) 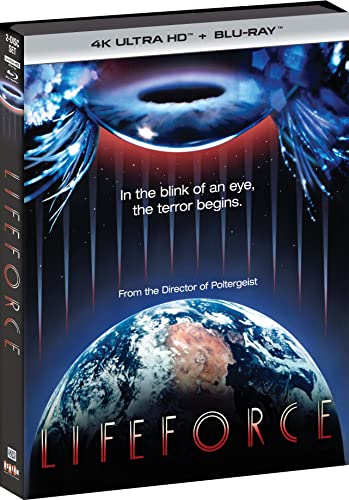 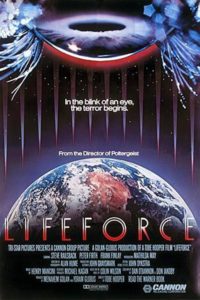 A few decades ago, in a galaxy we live in every single day, a 1980’s style space shuttle, the USS Churchill, transports a crew mixed with Yanks and Brits towards an unidentified spacecraft measuring 150 miles in length. This mysterious, artichoke shaped, spacecraft was hovering inside of Halley’s Comet, so the Churchill commander, Colonel Tom Carlsen, decides to investigate the ship’s innards, since Halley won’t show us her comet for another 76 years. Carlsen’s suicide squad uncovers thousands of giant bats on the spacecraft, but they are all dead and desiccated. Instead of immediately flying their asses out of this ship, the quartet moves deeper down the shaft of the spacecraft. They eventually discover three naked bodies, two hunky males and one female with bodacious boobies, encased in glass containers. This trio of nudists is determined to be in a deep sleeplike state. The crew of astronauts, following their horny leader’s orders, bag up a giant bat and transport it, along with the three nude comatose bodies, back to the USS Churchill so they can examine their finds on Earth. As the crew treks their way back, the Churchill mysteriously loses all contact with Earth

30 days later, back on Earth, mission control relentlessly tries to make contact with the USS Churchill, but their party line with Carlsen’s crew has been disconnected. Mission control deploys the space shuttle Columbia to rescue the Churchill after it has returned to Earth’s orbit. The rescue rangers find the interior of the USS Churchill has been gutted and burnt up. Dead bodies, believed to be the Churchill’s crew members, are found floating about the shuttle, while the three alien nudists are still safe and secure in their broken tanning beds. And, just like in Star Wars, an escape pod has mysteriously been jettisoned at some point. The sleeping nudists are taken to Earth and dropped off at the Space Research Centre in London, England. The busty female nudist wakes up just as an autopsy is about to be performed. The horny bird immediately kisses a guard then sucks the life force out of his body. (By the way, “life force” is not a euphemism for semen. Get your dirty minds out of the gutter.) The bodacious brunette proceeds to escape in the buff and sucks off more humans along the way, draining them of their life force. The two studly male aliens immediately awaken and attempt to escape the lab. The guards who weren’t sucked on by the female, try to kill the alien Chippendales with guns, but are not successful. The guards start chucking grenades at the duo and seemingly blow them up like the Nakatomi Tower. Two hours later, the guard who received the kiss of death from the busty female alien, suddenly comes back to life and sucks the life force out of the doctor who is about to perform an autopsy on him. The rejuvenated guard dusts himself off and begins to live a normal again. That is until he goes ape shit and is permanently dusted two hours later because he hasn’t consumed enough life force from the remaining human beings.

Meanwhile, deep in the heart of Texas, the Churchill’s escape pod has been retrieved. Colonel Carlsen is found alive, but R2-D2 and C-3PO have successfully escaped with the technical readouts of some battle station. Carlsen is immediately transported to jolly old London, where he debriefs the Brits about the fall of the USS Churchill. While sharing some tea and crumpets, the colonel recounts the wet dreams he was having about the female nudist/alien/vampire and felt compelled to release her from her broken tanning bed, sharing his life force with her. Ultimately, per Carlsen, the vixen began sucking on every member of the Churchill, draining them of their life force, so a jealous Carlsen set fire to the space shuttle with the intention of saving Earth from the femme fatale. The Brits don’t completely buy Carlsen’s story, so they put him into a hypnotic state. The Queen’s servants learn Carlsen’s horny ass has a spiritual connection to the female nudist/alien/vampire since he shared his life force with her. Carlsen goes on to reveal his muse can change her appearance, like a chameleon, and take the appearance of whoever she’d like to impersonate. Colonel Carlsen forms a tag team with Colonel Colin Caine, a member of Britain’s Special Air Service, and they hunt down Carlsen’s crazy alien girlfriend in a Yorkshire psychiatric facility. The two Colonels believe the hottie from outer space has taken the form of Captain Jean-Luc Picard, formerly of the USS Enterprise, and captured the handsome bald man. Colonel Carlsen was lusting after his muse so much, he French kisses Picard with the same passion Captain Kirk had for that green slave girl. Carlsen and Caine drug their prisoner and take her back to London via helicopter, but quickly learn the Dr. Xavier doppelgänger tricked them into leaving London so she and her fellow nudist/alien/vampires can begin taking over the world.

Back in London, the two hunky male nudist/aliens/vampires have survived the grenade attack, escaped by shapeshifting into soldiers, and began infecting the city’s population like a cheap Soho prostitute. The Carlsen and Caine tag team magically loses the female nudist/alien/vampire’s life force enroot back to London, causing the alien trio to now operate at full strength. The British government declares Martial Law because the vampire plague blitzkriegs all of London and the citizens are cyclically becoming vampires by sucking the life force out of each other. As the life force is being drained from each Londoner, the hunky male nudist/alien/vampires are systematically receiving and forwarding the life forces to their busty counterpart, who then forwards everyone’s life force to their artichoke shaped space craft, which is now in Earth’s immediate orbit.

Carlsen and Caine learn from their fellow freedom fighter, Dr. Fallada, one of the hunky male vampires, was killed by being impaled with an ancient lead iron sword. Fallada relays his hypothesis that the nudists/aliens/vampires have previously invaded Earth, bringing the original vampires to the planet. After Carlsen and Caine land in London, Carlsen’s hormonal instincts immediately lead him towards the busty brunette, who is texting life forces to the mothership while lying at the altar in St. Paul’s Cathedral. Meanwhile, Caine, the real soldier, seeks out Dr. Fallada, who hands off the lead iron sword to Caine just before being killed by rabid Green Street Hooligans. An aroused Colonel Carlsen confronts the busty brunette nudist/alien/vampire, who informs the American astronaut that they are now bound to each other by their shared life forces and cosmic sexual chemistry. Caine arrives at St. Paul’s Cathedral, where he finds the remaining hunky male vampire guarding the holy ground for his colleague with the massive mammaries. Caine charges at the hunky male vampire, with passion in his eyes, and thrusts the lead iron shaft into the alien’s chest, killing off its life force forever. Caine immediately makes his way into the Cathedral where Carlsen and the busty brunette are passionately exchanging bodily fluids and life forces. Cain tosses the lead iron weapon to Carlsen, who uses the sword like a medieval sex toy and penetrates himself and his vampire sex partner simultaneously. Their simultaneous deaths cause an orgasmic release of life forces that completely destroy St. Paul’s Cathedral. The horny couple is sucked into the artichoke-shaped spaceship, which gradually slinks back to Haley’s comet.