In Live Free or Die Hard, the United States comes under attack from cyber terrorists over Independence Day weekend. A “fire sale”, a cyber-attack designed to disable the nation’s infrastructure, is under way. New York City detective John McClane becomes involved and delivers his old-school justice to a new breed of terrorists. But when McClane is charged with babysitting a small time hacker who maybe the only hope of stopping the terrorists, will the two of them be able to stop the cyber terrorists before the county is plunged back into the dark ages. 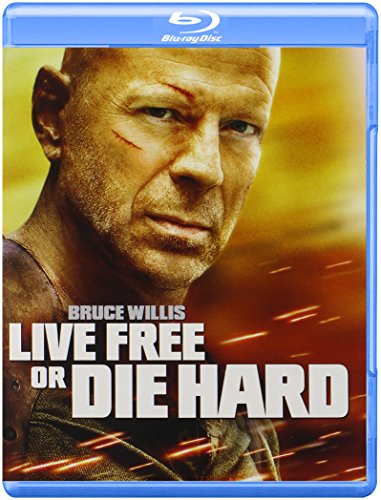 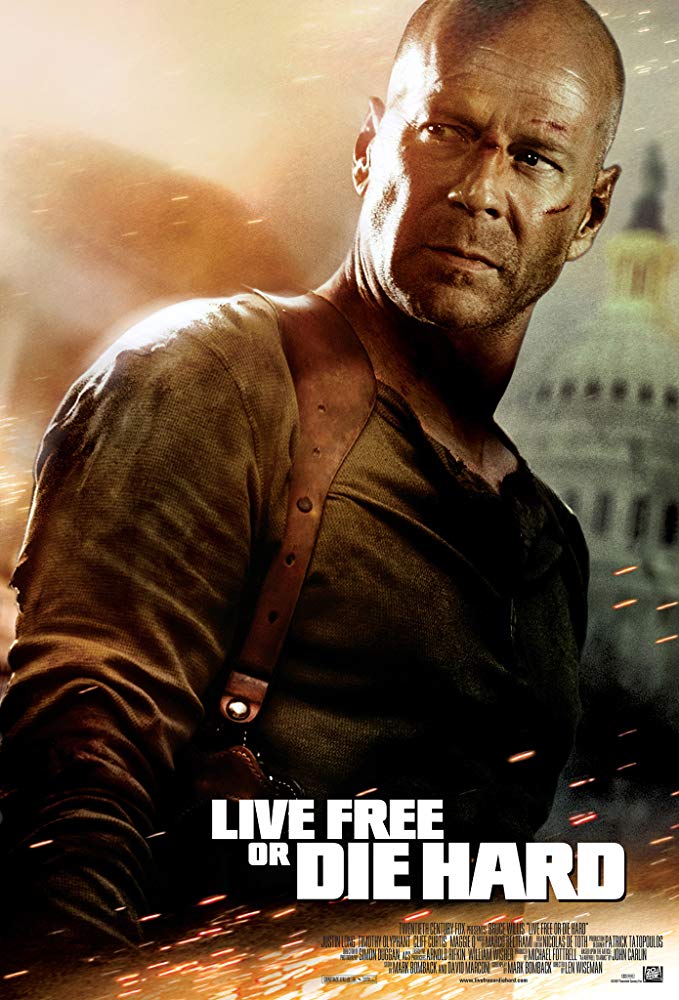 Live Free or Die Hard starts as the FBI suffers a brief computer outage at its Cyber-Security Division. As a result, they begin tracking down and detaining all the top computer hackers. The FBI asks for an agency assist from the New York City Police Department to detain Matthew “Matt” Farrell (Justin Long). Detective John McClane (Bruce Willis) is given the assignment. McClane finds Matt at his apartment, but before he can get him ready to leave, several assassins attempt to kill both Matt and McClane. McClane kills most of the hitmen and is able to get Matt into his car and begins heading to the FBI headquarters in Washington D.C.

While in route, Matt tells McClane that he had written an algorithm for another hacker named Mai Linh (Maggie Q) that could crack a specific security system. Meanwhile, a cyber terrorist named Thomas Gabriel (Timothy Olyphant) orders his hacker crew to begin taking control of transportation grids and the stock market. Gabriel also broadcasts a message threatening the United States. Matt recognizes that this is the beginning of a fire sale, a cyber-attack designed to disable the nation’s infrastructure.

McClane gets Matt to FBI headquarters, which has been evacuated due to a biological attack alert. The Deputy Director of the Cyber Crimes Division, Miguel Bowman (Cliff Curtis), orders McClane to take Matt to a secure sight for questioning. While in route, Linh poses as a dispatcher to reroute the FBI convoy into the path of an assault helicopter. All the FBI agents are killed, but McClane is able to protect Matt and destroy the helicopter by launching a car at it.

McClane and Matt attempt to get back to the FBI when they see a second broadcast from Gabriel showing a simulated explosion of the United States Capital building. Although it is not real, it still causes a panic in the public. Matt tells McClane that Gabriel’s next target will likely be the power grid. He and McClane drive to a power station in West Virginia which is one of the major power hubs for the East Coast.

Once there, they find Linh has taken over the power station. McClane and Matt battle and kill the entire terrorist team, and McClane drops a car on Linh in an elevator shaft, killing her. Matt begins to try to undo the programming damage that Linh implemented and Gabriel becomes aware of their interference. Gabriel is angered over Linh’s death, as they were in a relationship together. He redirects large amounts of natural gas to the substation in an attempt to kill McClane and Matt. They are able to barely escape.

McClane and Matt use Linh’s helicopter to fly to the home of small time hacker Frederick “Warlock” Kaludis (Kevin Smith). Warlock identifies Matt’s code as a means to access data at a Social Security Administration building in Woodlawn, Maryland. Warlock informs McClane and Matt that Gabriel was a top security expert for the U.S. Department of Defense. Gabriel tried to warn the Department of alarming weaknesses in the United States’ cybersecurity. However, his bristling demeanor caused him to be fired without making any significant changes. Warlock speculates that Gabriel’s entire plan is to prove his point to the government.

Matt and McClane ask Warlock to run a traceroute to identify Gabriel’s location. Gabriel identifies their trace and contacts Warlock. When he realizes McClane is still alive, he begins messing with the detective over the internet. He empties McClane’s bank and retirement accounts. He locates McClane’s estranged daughter, Lucy (Mary Elizabeth Winstead), trapped in an elevator in New York. Gabriel sends his men to retrieve her from the elevator. Warlock and McClane are able to grab a screenshot of Gabriel and send it to the FBI so they know who they are up against.

McClane and Matt head to the Woodlawn facility. Woodlawn is actually an NSA facility intended to back up the nation’s personal and financial records in the event of a cyber-attack. The fire sale triggers the system to download financial data to Woodlawn. Gabriel’s intent is access the data so that he can divert large amounts of money to his own private accounts and then disappear. Gabriel’s men are already downloading the financial information from Woodlawn’s servers.

Matt works on encrypting the data so Gabriel can’t access it while McClane battles the terrorists. Gabriel captures Matt and places him with Lucy, who has been brought to Woodlawn from New York. Gabriel escapes Woodlawn before the FBI’s anti-terrorist team arrives. McClane pursues. Gabriel impersonates the command system for a military jet and has the jet try to kill McClane. The detective is able to avoid being killed and destroys the fighter jet.

McClane follows Gabriel to a warehouse. Gabriel attempts to extract the encryption information from Matt who refuses to give it up, even after being shot in the leg by Gabriel. Gabriel threatens to shot Lucy if Matt doesn’t provide the access code. McClane arrives and kills several of Gabriel’s henchmen before being shot in the shoulder by the sole remaining henchman, Emerson (Edoardo Costa).

Gabriel positions himself behind McClane, putting the muzzle of his gun into McClane’s shoulder wound. McClane grabs the gun and fires the gun into his own shoulder and into Gabriel’s chest, killing him. Matt grabs a handgun and kills Emerson. A wounded McClane thanks a wounded Matt for saving his daughter’s life. McClane and Lucy mend their differences…for now.