Seven years after the Monsterpocalypse, Joel Dawson, along with the rest of humanity, has been living underground ever since giant creatures took control of the land. After reconnecting over radio with his high school girlfriend Aimee, who is now 80 miles away at a coastal colony, Joel begins to fall for her again. As Joel realizes that there is nothing left for him underground, he decides against all logic to venture out to Aimee, despite all the dangerous monsters that stand in his way. (Courtesy of Paramount Pictures) 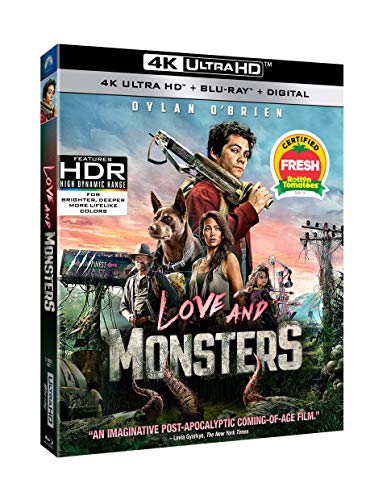 Sometime in the future, the Earth is nearly destroyed by an asteroid that was on collision course with the planet. The countries of the Earth unite and launch a nuclear strike that destroys the asteroid, but unfortunately unleashes a nuclear fallout all over the Earth. As a result, all cold-blooded animals on the planet mutate into large monsters and begin killing off most of humanity. Joel Dawson (Dylan O’Brien) is a high school student in Fairfield who is love with his girlfriend Aimee (Jessica Henwick). Unfortunately, the couple is separated during an evacuation of Fairfield, Joel going with his parents and Aimee with hers. Joel promises to find Aimee once he gets settled. During the evacuation, Joel’s parents are killed, but he finds a colony to live with in an underground bunker.

Seven years later, Joel still lives underground where the other survivors in his bunker, except for him, have all romantically paired up with each other. Joel keeps in touch with Aimee, who lives in a colony near the ocean, over a short-wave radio. Most of Joel’s colony spends their days fighting monsters and scavenging for supplies, but Joel is relegated to the kitchen as he is notorious for freezing in dangerous situations. On one occasion, a giant ant breaches the colony, killing one of Joel’s fellow colonists. Joel realizes that life is short and sets off on a quest to reunite with Aimee so that he does not end up alone.

I really didn’t have your typical upbringing. I mean, I did at first and then the world ended. Joel Dawson

During his seven-day journey, Joel passes through the suburbs of an abandoned town. He is attacked by a giant toad monster but manages to escape with the assistance of a stray dog named Boy. Boy joins Joel on his journey and assists by warning the inexperienced Joel against eating poisonous berries and other dangers. One day, Joel accidentally falls into a nest of worm monsters called Sand Gobblers. Joel is nearly killed but is saved by two other survivors named Clyde Dutton (Michael Rooker) and Minnow (Ariana Greenblatt). The pair are heading north to the mountains, where the colder weather and higher elevation means fewer monsters. Joel temporarily joins them during their journey, and they teach him some basic survival skills. Joel documents and illustrates his lessons in a journal. He also learns that not all monsters are dangerous, and some are friendly. Minnow tells him that he can tell by the look in their eyes. Clyde and Minnow invite Joel to stay with them, but Joel continues in his quest to find Aimee. Clyde gifts a grenade to Joel before they part ways.

Joel continues due west towards the ocean. Joel and Boy encounter a giant centipede monster who corners Boy. Joel freezes as usual but finds his courage when he sees his only companion in danger. Joel shoots and kills the monster with his crossbow, saving Boy. The next day, Joel and Boy shelter in an abandoned motel where they find a robot named Mav1s (Melanie Zanetti) that is low on power. Mav1s has enough energy to power Joel’s radio to contact with Aimee. Joel learns that new survivors have reached Aimee’s colony and are promising to lead them to safety. The next day, Joel and Boy are attacked by a Queen Sand Gobbler. The pair hide in a tree stump, but Boy barks and gives away their position. Joel kills the Queen by using the grenade that Clyde gave him. Joel is thrown into a pond by the explosion. Once the danger is over, Joel yells at Boy for putting them both in danger, causing Boy to run away. Joel climbs out of the pond and discovers that he is covered with poisonous leeches. Joel gets them off, but he begins to hallucinate. Fortunately, he is rescued by Aimee’s colony before he collapses.

Soon after, Joel wakes to finally see Aimee. She shows him around her beach colony of elderly survivors who depend on her. Aimee also introduces Joel to the new survivors Cap (Dan Ewing), Dana (Ellen Hollman), and Rocko (Tre Hale). Cap states that he intends to take Aimee’s colony to a safer place on the ocean. Everyone in the colony is excited to leave. Aimee confesses she is glad to see Joel but informs him that she is a different person than she was seven years before. She also informs Joel that she is still mourning someone that she had become involved with. With nothing to keep him there, Joel decides to return to his colony and contacts them on the radio. He learns that their bunker has become unsafe and that they will be forced to leave soon to survive. Cap sends Joel some berries which he recognizes from his travels with Boy as poisonous. Joel realizes that Cap is not to be trusted and rushes to warn Aimee, but he is knocked unconscious.

Joel awakens tied up on the beach with Aimee and the rest of her colony. Cap reveals that his group is there to steal their supplies and that their yacht is towed by a crab-monster that Cap controls with an electrified chain. Cap electrocutes the crab to alert it to feed on the colonists. Joel and Aimee free themselves and begin fighting for their lives with Cap and his crew. Boy returns and begins to help Joel fight the crab. Joel figures out how to kill the crab, but he determines that the crab is not hostile by looking into its eyes. Joel shoots the electrified chain, freeing it. The crab leaves Aimee’s colony alone and attacks Cap and his crew, killing them and sinking their yacht.

Not long after, Joel and Boy prepare to return to Joel’s colony. Joel recommends that Aimee and her colony head north to the mountains. Joel passionately kisses Aimee before leaving, and Aimee promises she will find him. Joel travels back to his colony and finds most of them still alive. He leads them to the mountains. Before leaving, Joel leaves a recording that repeats on the radio that instructs everyone on how to survive in the world and where to travel to in the mountains. Multiple colonies, including Aimee’s, follow Joel’s instructions and begin heading to the mountains. In the mountains, Clyde and Minnow ponder whether Joel will survive his next journey.