In Lucy In the Sky, Natalie Portman plays Lucy Cola, a strong woman whose determination and drive as an astronaut take her to space, where she is deeply moved by the transcendent experience of seeing her life from afar. Back home as Lucy’s world suddenly feels too small, her connection with reality slowly unravels. (Courtesy of Fox Searchlight Pictures)

‘Lucy in the Sky’ Movie Summary 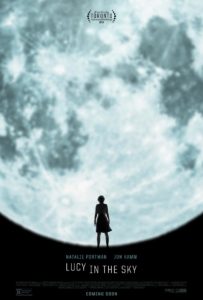 Lucy Cola (Natalie Portman) is on her first mission for NASA in outer space. During the mission, she is left awestruck by the experience and feeling forever changed. Once she returns to Earth, Lucy feels disconnected from her normal life with her husband Drew (Dan Stevens) and her niece Blue (Pearl Amanda Dickson), who she is helping raise after her brother becomes an absent father. NASA directs Lucy to rest and undergo therapy. However, Lucy continues to push herself physically and mentally in order to be selected for one of the next missions to return to space.

During training, Lucy meets a younger female astronaut named Erin Eccles (Zazie Beetz). She gets along with Erin due to them both being women in a predominantly male dominated world, but she still sees her as competition. Lucy begins spending more and more time with other astronauts who have been to space since she finds her husband Drew boring and unrelatable. Lucy eventually begins a passionate affair with fellow astronaut Mark Goodwin (Jon Hamm) who seems to understand her experiences in space.

In training, Lucy becomes determined to beat a record recently set by Erin and nearly drowns during an underwater test. The supervising team recognizes that Lucy remained completely calm during the accident with her heartbeat growing calmer while she couldn’t breath. A short time later, Lucy is dining with Drew and encounters Mark out on a date with Erin. Realizing that they too are having an affair, Lucy begins to feel increasingly isolated from her husband. Lucy confronts Mark and demands that he end his relationship with Erin. Mark implies that he will break off the relationship.

Shortly afterwards, Lucy’s grandmother, Nana Holbrook (Ellen Burstyn), dies of a stroke. Nana raised Lucy and instilled her work ethic and Lucy’s drive in her, so her loss deeply effects Lucy. Drew begins to become concerned with Lucy’s increasingly erratic behavior. After Nana’s funeral, Lucy walks out on her husband and takes Blue with her. Lucy breaks down in a public restroom at a bowling alley, feeling that her world is closing in around her.

Back at NASA, one of the administrators, Frank Paxton (Colman Domingo), confronts Lucy with the near drowning incident and the information that she has been skipping her therapy sessions. Frank informs her that she is being passed over for a spot on the upcoming shuttle mission. In conciliation, Frank informs Lucy that she can qualify again for a scheduled mission in three years time. Lucy is furious and her paranoia causes her to believe that she has been passed over for ulterior reasons. She breaks into Mark’s computer in his office and reads several emails showing that he has continued his affair with Erin. Even worse, she finds an email from Mark to NASA recommending that Lucy be passed over for the next mission. Later, Lucy discovers that Erin has been selected for the mission commanded by Mark, the coveted spot that Lucy desired.

Lucy’s grip on reality continues to unravel. She decides to take revenge on Mark and Erin. Knowing that the secret couple are planning a getaway together, Lucy embarks on a cross country trip to surprise them when they get off the plane in San Diego. Lucy takes a confused Blue with her. Along the way, Lucy experiences hallucinations of her grandmother and leaves several erratic messages for NASA. Lucy dons a wig and stalks Mark and Erin in the airport. Once in the parking garage, Lucy tearfully confronts Mark until Erin appears. Lucy sprays Mark with fly spray, blinding him. Mark drives off. Police surround the parking garage, and an unhinged Lucy attempts to flee from them. She contemplates suicide after reaching the top of the garage, but she is ultimately apprehended by police. Law enforcement finds an assortment of weapons and tools in her car.

Three years later, Blue is giving a presentation in class with Drew in attendance. Lucy is working as a beekeeper having separated from her husband. After closing one of the hives, she opens the hood of her protective suit and smiles as the bees and one solitary butterfly fly around her.