Master thief Lupin the Third’s latest and greatest caper has hit a snag. What should’ve been bags of cash from a national casino turns out to be expert counterfeits! Together with his partner-in-crime Jigen, Lupin heads to the remote European nation of Cagliostro to exact revenge. Not everything goes as planned; the two encounter Clarisse, a royal damsel in distress being forced to marry the sinister Count Cagliostro against her will. Saving her won’t be easy, however, as Lupin and Jigen — together with Lupin’s unpredictable ex-girlfriend Fujiko and the swordsman Goemon — must fight their way through a trap-filled castle, a deadly dungeon, and an army of professional assassins! Can Lupin rescue the girl, evade the cuffs of his ling-time nemesis Inspector Zenigata, and uncover the secret treasures of The Castle of Cagliostro? 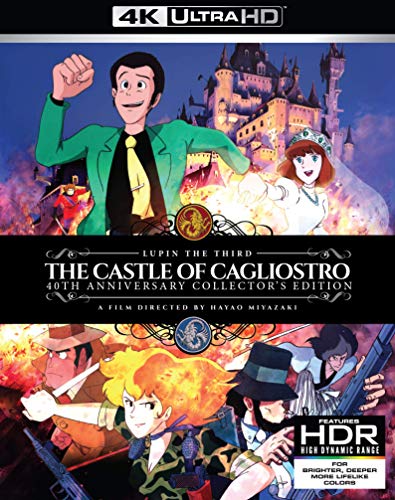 Lupin the 3rd: The Castle of Cagliostro 4K UHD [Blu-ray] 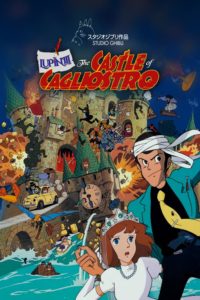 In 1968 Monte Carlo, master thief Arsène Lupin III (Yasuo Yamada)—no copyrighted relation—and his cohort, Daisuke Jigen (Kiyoshi Kobayashi), make a quick exit from a casino after they steal a shit-ton of money. Unfortunately for the duo, as they flee, Lupin notices the bills are actually high-quality counterfeits.

Intrigued, Lupin decides to find the person or persons creating them and the trail leads him to the Grand Duchy of Cagliostro in the Mediterranean. On the way, a young woman speeds by Lupin and Jigen with a group of armed men in hot pursuit. The duo chases down the gang and saves the woman, but Lupin is knocked unconscious after he and the woman fall off a cliff. The girl runs off but more men show up in a boat and capture her.

When Lupin comes to, he finds the woman’s ring in her glove she left behind. He recognizes the ring as belonging to the princess of Cagliostro named Clarisse (Sumi Shimamoto). Count Lazare (Tarou Ishida) has arranged to marry Clarisse to both cement his power in the family and to recover an ancient treasure hidden somewhere in Cagliostro’s castle. In order to get the treasure, he needs both his and Clarisse’s ancestral rings… and Lupin is now in possession of hers.

That night, a gaggle of the Count’s assassins show up to the inn Lupin and Jigen are staying and attack them, but they escape. Lupin does manage to leave his calling card on the back of Jodot (Ichirou Nagai). Jodot is not only the Count’s butler but also his chief assassin, and that note on his person announces that Lupin will soon steal Clarisse, but to do so, Lupin will need a bit more help.

He calls in his partner Goemon Ishikawa XIII (Makio Inoue) and also tips off Inspector Koichi Zenigata (Gorou Naya) to his whereabouts to provide a distraction as the Inspector always makes a mess of things.

Lupin next sneaks into the castle and disguises himself as Zenigata to look for Clarisse. To do so, Lupin gets the castle guards to believe that the real Zenigata is a disguised Lupin. In the chaos that ensues, the real Zenigata winds up trapped in the castle’s catacombs. This leaves Lupin free to explore the rest of the castle.

Along the way, Lupin comes across Fujiko Mine (Eiko Masuyama). Fujiko is Lupin’s on again / mostly off again lover and a master thief herself. She’s in the castle posing as Clarisse’s lady-in-waiting while she tries to find the mysterious family treasure.

Eventually, Lupin finds Clarisse in a tall tower and returns her ring before vowing to help her to escape. Before he can help her though, the Count shows up and opens a trapdoor which sends Lupin into the catacombs too. On the way down though, Lupin trolls the Count through the ring he gave to Clarisse. It wasn’t her real ring but a fake one with a transmitter inside. An angry Count orders Jodot to find Lupin and get the ring. Jodot sends three assassins to retrieve it.

While in the catacombs, Lupin comes across Zenigata. Unable to get out of them, Zenigata agrees to work with Lupin to escape. When the assassins do show up for Lupin, the two men overpower them and they escape to a large room full of printing presses. The men discover they are the source of the counterfeit money from around the world. Cagliostro has used fake money throughout history to form a global shadow empire.

While Zenigata wants to collect evidence, Lupin says they need to escape the castle first. He starts a fire as a distraction and the two steal the Count’s autogyro to flee. As the men try to rescue Clarisse and Fujiko, Jodot shoots Lupin—or wounds him—it’s unclear what his true injury is. Either way, Lupin has a really big boo boo. Clarisse offers to give the ring to the Count in exchange for Lupin’s life, and the Count agrees. However, once he gets the ring, he attempts to double cross Lupin. Fujiko foils his plan and she, Lupin, and Zenigata flee but Clarisse remains behind.

Goemon and Jigen—who previously saw the castle in flames and took that as a sign to help Lupin—arrive and take him to the safety of the local gardener’s cottage to recover. He’s out three days. Meanwhile, Zenigata has returned to Interpol to convince his superiors to prosecute the Count for counterfeiting. However, the Count has bought and paid for these men. They refuse to take the matter any further and pull Zenigata off his case.

Once awake, Lupin decides to stop Clarisse’s wedding and rescue her. He tells Goemon and Jigen that ten years ago, Clarisse saved his life after his attempt to find the treasure of Cagliostro went bad. Fujiko then calls Lupin from an unknown location with a tip to sneak into the castle before also calling Zenigata so that he can publicly reveal the counterfeiting operation under the guise of pursuing Lupin.

The wedding day arrives, and the Count drags a drugged Clarisse to the altar. As the wedding progresses, Lupin disrupts the ceremony and steals Clarisse and the two rings. As this goes on, Fujiko, posing as a television reporter, follows Zenigata with a live camera that’s been broadcasting the wedding to expose the Count’s counterfeiting facility to the world.

However, the Count doesn’t realize this is going on. He’s cornered Lupin and Clarisse on the face of the clock tower where Lupin makes a trade with the Count—the rings and how they reveal the treasure in exchange for Clarisse’s life. Once again, the Count agrees and then reneges on that agreement. Instead, he gets the rings and Clarisse falls off the tower. Lupin jumps off after her and the two fall into the lake below.

The Count then uses Lupin’s instructions to reveal the treasure. In the process, the clock’s arms converge to midnight, crushing the Count to death as he was standing on the little hand. The clock tower collapses to reveal a hole in the dam. The water gushes out of the lake to reveal the true treasure of Cagliostro—the ruins of a submerged Roman city.

With the day saved, Clarisse asks Lupin not to leave her. She’s even willing to become a thief herself. However, Lupin kindly tells her to stay. Goemon and Jigen arrive to pick up Lupin before Zenigata can arrest him. The three say goodbye to Clarisse who is now the sole owner of the ruins. Zenigata shows up to arrest Lupin for stealing Clarisse’s heart.

Fujiko heads out with the stolen plates from the Count’s printing presses while Lupin, Goemon, and Jigen drive off into the sunset—Zenigata closely following behind.