Tensions and temperatures rise over the course of an afternoon recording session in 1920s Chicago as a band of musicians await trailblazing performer, the legendary “Mother of the Blues,” Ma Rainey. Late to the session, the fearless, fiery Ma engages in a battle of wills with her white manager and producer over control of her music. As the band waits in the studio’s claustrophobic rehearsal room, ambitious trumpeter Levee – who has an eye for Ma’s girlfriend and is determined to stake his own claim on the music industry – spurs his fellow musicians into an eruption of stories revealing truths that will forever change the course of their lives. (Courtesy of Netflix) 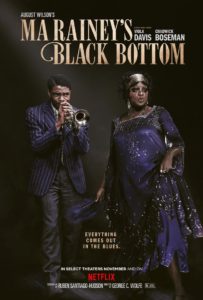 Adapted from two-time Pulitzer Prize winner August Wilson’s play, the film begins on July 2, 1927 at the Paramount recording studios in Chicago. Producer Mel Sturdyvant (Jonny Coyne) is anxiously awaiting the arrival of Ma Rainey (Viola Davis), a highly regarded blues singer that he has recently signed. Ma’s studio band is made up of Georgia Jazz Band members Toledo (Glynn Turman), Cutler (Colman Domingo), and Slow Drag (Michael Potts) who arrive on time. The fourth member of the band, overconfident trumpeter Levee Green (Chadwick Boseman) arrives late after stopping to buy some new shoes. Levee shows Sturdyvant some of his own musical compositions in the hopes that the music producer will want to record with Levee. The trumpeter desires to break away from playing second fiddle to Ma and wants his own record deal. The rest of the band scoffs at Levee’s ambitions and cautions him against making Ma mad.

Eventually, Ma arrives at the studio nearly an hour late. Ma is accompanied by her girlfriend Dussie Mae (Taylour Paige) and her stuttering nephew Sylvester (Dusan Brown). Ma hits the studio like a tornado and immediately begins giving orders as to how everything is to be done. She refuses to record “Ma Rainey’s Black Bottom” with an accompaniment composed by Levee and insists that her nephew be allowed to record the opening introduction to the song. As a result of Sylvester’s stutter, the band and the producers are forced to do multiple takes of the song which begins to frustrate everyone involved.

At one point, Ma interrupts the session after her manager Irvin (Jeremy Shamos) fails to bring her a Coca-Cola. She dispatches Slow Drag and Sylvester to a nearby store to get her one. While they are gone, Ma complains to Cutler that her white bosses do not care for her as a person because she black. Cutler agrees with her. Ma explains that she does not want to be bossed around for her own art and expects to be allowed to do whatever she pleases while she can. At the same time, Levee begins hitting on Dussie Mae and promises her that he will be a big musician someday. Shortly afterwards, Levee and Dussie Mae have sex in the downstairs rehearsal room.

After Ma finishes her Coke, the group continues with their recording session. Sylvester finally gets through a take without stuttering and the group successfully completes the track. However, Sturdyvant regretfully informs them that they had an equipment failure which caused part of the track not to record. The band blames Levee, accusing him of tripping over a wire while flirting with Dussie Mae. The argument leads to a religious discussion where Cutler tells a story of a black preacher that he once knew who was forced to dance for some white men while they tore up his Bible. Levee brushes off the story, claiming that there is no God. He tells Cutler that if there was a God, then he hates black people. Cutler attacks Levee in anger, which leads to Levee pulling out a knife in retaliation. Levee screams at Cutler to have his God stop him from stabbing him, as Levee’s anger over the events earlier in his life come boiling to the surface.

Life ain’t shit. You can put it in a paper bag and carry it around with you. It ain’t got no balls. Now death…. death got some style. Death will kick your ass and make you wish you never been born. That’s how bad death is. But you can rule over life. Life ain’t nothing. Levee Green

Eventually, everyone calms down and the group finally finishes recording the song. Immediately after, Ma fires Levee, believing his ambition is bad for the band. Ma is paid by Sturdyvant and begins to leave with Sylvester and Dussie Mae without signing the release forms for the recorded songs. Sturdyvant follows her out to the street and begs her to sign the release, which she ultimately does. Back inside the studio, Levee is angered over his termination. He approaches Sturdyvant about his original songs. The producer offers to purchase them for five dollars a song but shows no interest in recording the songs with Levee indicating that the songs are not suited for a black singer.

With his dreams of making it as famous musician deflated, Levee returns to the rehearsal room. Toledo accidentally steps on Levee’s new shoes, scuffing them. Levee angrily confronts the pianist who apologizes but acts as if it is no big deal. Levee has a mental breakdown and stabs Toledo in the back with his knife. Cutler and Slow Drag watch on in horror as Levee cradles Toledo’s body until the old man dies. Levee sobs over the old man’s death. Later, Sturdyvant records one of Levee’s songs with a band consisting entirely of white men.