Max stumbles onto a desert city in the post-apocalyptic world that is built on the principle of unbridled, cutthroat capitalism where anything—even a human life—can be bartered. Caught in a power struggle between the city’s two rulers, Max breaks the one inviolable rule of a city with no other rules when he refuses to kill. 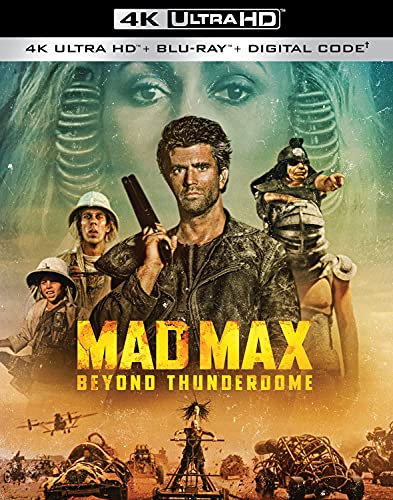 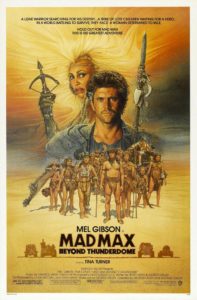 The third installment of the Mad Max series begins with Max Rockatansky (Mel Gibson) traversing the desert in a camel-drawn V8 wagon. Suddenly, a pilot named Jedediah (Bruce Spence) swoops in with his son, Jedediah Jr. (Adam Cockburn), in a plane and knocks Max off his wagon. Jedediah hops onto the wagon from the plane and steals it while Junior flies off in the plane.

Max follows them on foot to a place called Bartertown—the most advanced civilization around—so advanced, they have basic electricity. However, Max isn’t welcome in the town as he has nothing of value to trade. He convinces the main trader named The Collector (Frank Thring) he has value. The Collector then takes him to talk with Bartertown’s ruler, Aunty Entity (Tina Turner). She decides that she will resupply his vehicle and equipment if he helps her first.

It turns out that Bartertown’s electrical supply depends on methane refined from pig shit, and an arrogant dwarf named Master (Angelo Rossitto) and his bodyguard named Blaster (Paul Larsson) run that refinery. She has an uneasy truce with them for control of Bartertown, but of late, Master has begun to assert his authority over it—which Aunty doesn’t like.

She tells Max to confront Blaster in front of the town. This will result in a conflict that, under Bartertown law, can only be resolved with duel to the death in a gladiatorial arena called Thunderdome. Max agrees, but wants to size up his competition first. He goes down to the refinery to shovel pig shit and check out Master Blaster. There he befriends a guy named Pig Killer (Robert Grubb). He’s been named that because he slaughtered a valuable pig to feed his family. His sentence is to shovel shit for the rest of his life, however long that may be.

Once down there, Max finds Master Blaster has his stolen vehicle and when he demands it back, Master balks. However, Max does learn from this exchange that although Blaster is exceptionally strong, high-pitched noises both disorient him and incapacitate him. Now confident he can beat Blaster, Max confronts him in front of the whole town, and the two agree to settle it in Thunderdome where two men will enter but only one man will leave.

Blaster dominates most of the fight due to his super strength, but when Max uses a high-pitched whistle on Blaster, he takes control of the fight. With victory in hand, Max knocks Blaster’s helmet clean off to reveal his opponent is mentally disabled…he might even have Down syndrome.

Max refuses to kill him and tells Aunty in front of everyone he won’t go through with their deal. Master, not knowing of Aunty’s deal is enraged. He vows to shut down the refinery in retaliation. With no electricity, this would effectively close down Bartertown. Aunty has one of her goons kill Blaster and imprisons Master in the refinery.

Since Max refused to kill Blaster in Thunderdome, he’s broken the law and Aunty exiles him. Her men bind his wrists, throw him on the back of a horse, and send him off into the wasteland. Soon the horse collapses from heat exhaustion and sinks into the sand. Max is able to free himself first and escape.

Soon though, Max too collapses from heat exhaustion, but before he dies, a young woman named Savannah Nix (Helen Buday) rescues him and takes him to her village called Planet Erf. It’s a small town of children and teens living at an oasis. The children are the descendants of a crashed Boeing 747 whose parents seem to have abandon them to find some sort of remaining civilization.

Savannah and the others think Max is the 747’s old captain named G. L. Walker. Max tells them they are wrong and orders them to remain in oasis’ relative safety because the closest civilization he knows of is Bartertown, and it’s no damned Promised Land.

However, that night while Max sleeps, Savannah and another tribe member named Scrooloose (Rod Zuanic) gather a number of children to find a place called Tomorrow-morrow Land. The next morning, the children’s other leader, Slake M’Thirst (Tom Jennings), asks Max to save them. He agrees and takes a few of the children with him to help. By the time they catch up to Savannah’s group, a sinkhole is in the midst of swallowing them all. Max saves all but one of them. However, they are now without sufficient supplies to return to the oasis so they head to Bartertown.

Once there, they sneak in through an underground entrance. Pig Killer helps them free Master before escaping in a truck converted to run on railroad tracks. As they break out, they destroy Bartertown’s methane refinery.

Aunty takes chase with her goons in a variety of ragtag vehicles so that they can retrieve Master. They catch up to the train-truck so Max and Scrooloose commander some of the goon’s vehicles to slow Aunty down. As it appears they will escape, train-truck comes to the end of the line for the railroad tracks.

As it comes to a halt, Jedediah Jr. is there to rob them, but when he spots Aunty and her boys in hot pursuit, he flees. Max and his group follow him underground where they find Jedediah chilling in bed. Max makes Jedediah fly them all to safety in his airplane. However, they no longer have enough runway to take off. Max gets in a vehicle and uses it to clear a path through Aunty’s approaching gang of cars. As he crashes through them, the plane takes off. However, Max is now alone, defenseless, and staring down the barrels of Aunty’s goon’s guns. Instead of killing Max, Aunty spares his life out of the respect she’s gained from him. She and her goons abruptly leave to begin rebuilding Bartertown.

Jedediah flies the children to the coast of Australia where they find the ruins of Sydney. Years pass and we find Savannah now the leader of this group which has prospered into a small community there. Every night, she recites the story of their journey and tells of the man who saved them.

The film ends with Max, still alive in the desert, as he walks off to an unknown future.