Mad Max: Fury Road takes place in an apocalyptic setting out in a stark, desert landscape. The brutality of the world has broken humanity to the point that everyone is crazy and fighting for the necessities of life. Within this world, two rebels on the run exist with hopes of restoring restore order to the place. Max is a man of action but with few words. He seeks peace of mind following the loss of his wife and child in the aftermath of the fall of man. Then there’s Furiosa; a woman of action who believes her path to survival is across the desert where she can rebuild her childhood homeland. 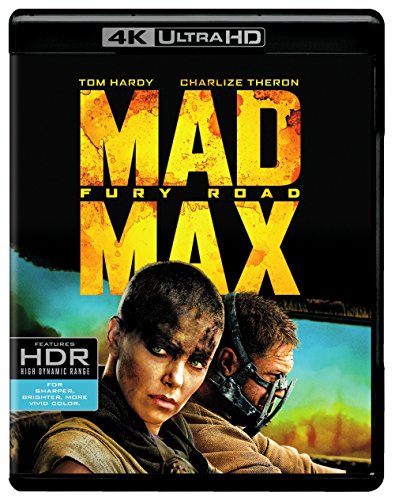 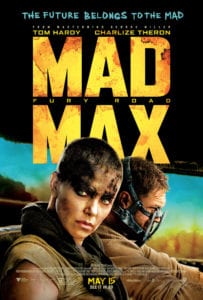 Mad Max: Fury Road begins in a post apocalyptic world following an energy crisis. A group of War Boys, the army of Immortan Joe, captures Max Rockatansky. They take him to Joe’s Citadel, and imprison him. There, they force him to be a universal blood donor, and hook him up to a sick War Boy named Nux as his blood bag.

Elsewhere in the complex, Imperator Furiosa, one of Joe’s lieutenants, sets out in an armored semi-truck called a War Rig to collect gasoline and ammunition from a nearby town. After she drives off Joe’s scheduled route, it raises an alarm. It’s then that Joe realizes that his five wives he’s specially selected for for breeding are missing, and assumed on Furiosa’s rig. Joe leads his entire army to bring them and Furiosa back. He also asks the warlords for the nearby Gas Town and Bullet Farm for help.

Nux, looking for glory, straps Max to his hood, and joins the war party. Joe’s army catches up, but after a brief battle, Furiosa drives full on into a massive sand storm. She leaves most of the pursuing army behind except for Nux who’s bat shit crazy. He’s looking to sacrifice himself to destroy that War Rig. He fails, and the car gets destroyed in the process. Max manages to escape, but has to bring Nux with him for now as the two are still chained together.

After the storm passes, Max finds the Rig stopped a few hundred feet in front of him. Furiosa repairs the Rig While Joe’s wives drink water, and cut off their chastity belts. The five wives are: Capable, Cheedo, Toast, the Dag, and the very pregnant Splendid Angharad.

They cut Max free from Nux, but then Max tries to steal the Rig. However, Furiosa has a kill switch on it which disables it as he tries to leave. So Max has no choice but to agree to let Furiosa and the wives come along for the ride. Nux secretly climbs on the Rig as pulls away, and he attempts to take out Furiosa. They toss him out of the War Rig to the sand below where Joe’s army stops and picks him up.

Furiosa has previously made a deal with a local biker gang for safe passage through a canyon they control. However, with Joe’s army in hot pursuit, the gang pusses out on her. They force her to drive the War Rig through the canyon as the bikers destroy its canyon walls to block Joe and his War Boys.

Max and Furiosa now have to fight the pursuing bikers, and once Joe breaks through the blockade, him as well. Nux is on board his car, and once again that crazy War Boy tries to take Furiosa out. He gets on board the War Rig, but fails to get Furiosa again; much to Joe’s disappointment. As the War Rig escapes this latest attack, Splendid Angharad falls off it as she tries to help Max. Joe’s car runs her over; killing both her and her unborn child.

Max would like to know where they are headed, and Furiosa tells him that the Eden like “Green Place” she remembers from her childhood is their final destination. At the same time, Capable finds Nux hiding in the Rig. He’s upset he failed again, and this time, it was with with Immortan Joe watching. Showing compassion, Capable comforts him.

That night, the Rig gets stuck in the mud. To slow Joe’s approaching army, Furiosa and Max set mines in the road. However, the Bullet Farmer isn’t slowed at all. While Nux and Max frees the Rig, Furiosa shoots the Bullet Farmer; blinding him. Max then walks into the dark towards the Bullet Farmer and his men. There’s an explosion, and Max soon returns without saying a word; covered in blood, and carrying the ammo of the Blind Farmer’s men.

Now free from the mud, they drive the War Rig through the swampland into the desert until they happen upon a naked woman in a tower the next day. Max knows it’s a trap, but Furiosa approaches the woman anyway. She calls out her history and clan affiliation. The naked woman then calls out to her clan, the Vuvalini. They recognize Furiosa as one of their own who was kidnapped as a child.

Unfortunately, when they tell Furiosa the swampland they drove through was the Green Place, she’s devastated because it’s now uninhabitable. So, the group decides to ride their motorbikes across immense salt flats in the hope of finding a new home. Max thinks it’s a bad idea, and chooses to stay behind. However, he’s been prone to tormenting visions since a child he tried to save died anyway. Instead, he convinces the women to return to the undefended Citadel instead. There, they can live off of the ample water supply that Joe selfishly keeps for himself. To do so, they will try to trap Joe and War Boys back in the bikers’ canyon.

The group flips a bitch, and heads back to the Citadel. Joe’s War Boys attack them, and they manage to seriously wound Furiosa. Joe drives his car in front of the War Rig in an attempt to slow it down as Max then fights with his muscle-bound son, Rictus Erectus.

Joe captures Toast, but she distracts him long enough for Furiosa to kill him. Nux sacrifices himself when he purposely flips the War Rig; killing Rictus and blocking the canyon from any remaining enemies. Max, Furiosa, the wives, and a few surviving Vuvalini escape in Joe’s car.

Now safe from pursuit, Max transfuses his blood to Furiosa; saving her life. When they arrive at the Citadel, the impoverished citizens rejoice at the news of Joe’s death. They excitedly cheer Furiosa, and the few War Boys remaining there welcome them all too. Max tosses Furiosa a warm glance before blending into the crowd so he can continue on his journey alone.

User Rating: Be the first one !
May 18, 2019
5 minutes read
Show More
Back to top button
Close
Close