In Man Bites Dog, two documentary filmmakers, André and Rémy, have found an ideal subject in Ben. He is witty, sophisticated, intelligent, well liked—and a serial killer. As André and Rémy document Ben’s routines, they become increasingly entwined in his vicious program, sacrificing their objectivity and their morality. 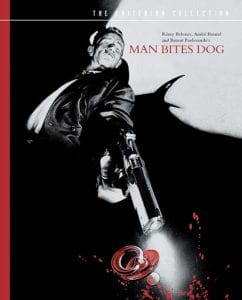 C’est arrivé près de chez vous (Man Bites Dog) follows the life of Ben; a witty and charismatic serial killer. A film crew joins him to document his misdeeds to use in their upcoming documentary on him. Ben takes us to meet his friends and family, and then nonchalantly talks about murdering random people. We watch has he callously dumps their bodies in canals and quarries in broad daylight.

Ben prefers to attack old people as they are frail and tend to have more money are home; making them easier targets. They go to the apartment of an elderly lady, and Ben scares her so she has a heart attack. As she dies in front of him, Ben quips that she saved him a bullet. Throughout the expose, Ben casually opines over wide-ranging topics like shooting and killing, women, illegal immigrants, architecture, and postmen.

As the crew gets to know Ben more, they soon switch from being passive observers to active participants in Ben’s murders. They help him hold down and smother a boy to death during a home invasion where he kills the entire family. When they come across a competing camera crew, they shoot the three men. Over the course of the filming, two crew members are killed which another crew member writes off as an occupational hazard.

At one point, Ben takes a couple hostage in their own home. While he holds the husband at gunpoint, he and the crew gang-rape the woman. The next morning, everyone is still in that couple’s apartment, but by now, Ben has butchered the woman to death with a knife, and shot her husband to death.

As the film progresses, Ben becomes more unpredictable and violent. Eventually, he kills an acquaintance in front of his friends and girlfriend during a birthday dinner. With everyone there covered in blood spatter, they try to act as if nothing happened. The film crew is nice enough to dispose of the body for Ben though.

One victim is able to escape before Ben can kill him. The police are therefore able to arrest Ben, but he manages to escape. We find that elsewhere in town, another killer is after Ben, and he kills Ben’s parents and his girlfriend Valerie. She was a professional flautist, and the killer shoves her flute up her anus once dead to add insult to injury.

Now Ben decides to leave before anything happens to him. He meets with his camera crew one last time to say goodbye. As he recites a poignant poem to the boys, the unknown killer shoots Ben dead. He then kills each crew member one by one. Once the cameraman is hit, the camera falls to the ground where it remains. The film ends as the sound recordist falls from the murder’s bullet.

Indiana Jones and the Last Crusade (1989)

Indiana Jones and the Last Crusade (1989)