In 1888, Jack the Ripper is out and about killing women in the Whitechapel district of London. When a mysterious man named Mr. Slade arrives at the home of Helen and William Harley looking to rent rooms, they note that Slade is a very strange man. However, he’s a respected pathologist and researcher at a major hospital. Coincidentally though, he’s always out of the house every time the Ripper strikes, and he moderately matches the only know description of the killer. This convinces Mrs. Harley that Slade is the Ripper, but with tensions mounting across the city, everyone is a suspect. 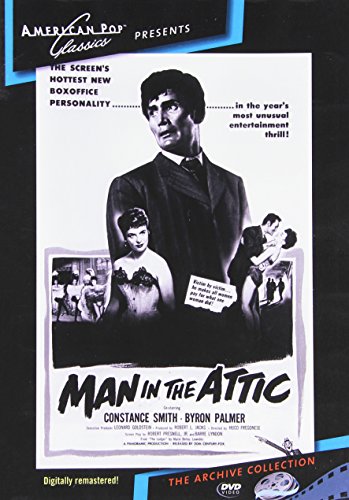 Man in the Attic

‘Man in the Attic’ Movie Summary Man in the Attic takes place in 1888 London. It’s very late on the third night of the Jack the Ripper killings when a research pathologist named Mr Slade (Jack Palance) arrives at the home of William and Helen Harley (Rhys Williams and Frances Bavier). He’s looking to rent a room there based on a friend’s recommendation. Besides a room, he rents out their attic to continue on with his research.

After agreeing to rent the rooms to Mr Slade, Mrs Harley notices the man’s strange mannerisms. He immediately turns all the pictures of actresses in his room to face to the wall, so he can’t feel their eyes on him. He also mentions that he is usually out late at night working, but never explains what “work” is.

Also staying at the house is Mrs Harley’s niece, Lily Bonner (Constance Smith). She’s a very a beautiful stage actress and singer who’s just returned from Paris where she has a successful stage production.

On the evening of Lily’s opening night in London, Slade leaves the house to do his usual mysterious experiments wearing an Ulster coat and carrying a small black bag. Annie Rowley (Lilian Bond), an old colleague of Lily’s who has fallen on hard times visits with her backstage at the theater. However once she leaves, Jack the Ripper murders her. This causes Inspector Warwick (Byron Palmer), who is investigating the murders, to pay Lily a visit. He tells her that the suspect was seen wearing an Ulster coat and a small black bag.

The next morning, when Warwick goes to see Lily again to ask her a few questions, Slade appears and gives his differing opinion regarding the Ripper. He believes the police will never catch the man. However, Mrs Harley’s suspicions in Mr Slade are aroused when she smells something burning from his attic room. She convinces herself that Slade is the killer when she discovers that he was burning his black bag. Mr Harley disagrees, and says that Mr Slade is just being smart because every man in town with a black bag is now being harassed and accused of being the murderer.

By now, Lily has developed quite an attraction to Slade, and the feeling is mutual. As the two begin to bond, he opens up and tells her that his mother was also an actress. Unfortunately, although she was beautiful, she was so evil that he both loved her and hated her. Furthermore, she was such an adulterer that his father became an alcoholic when she left him. Her last years on Earth were spent as a prostitute, and she died on the streets of Whitechapel. Slade also shows Lily a picture of her which he keeps in his room’s desk.

Inspector Warwick now shows up to take Lily to the Black Museum. Slade decides to join them; much to Warwick’s displeasure as he was looking forward to spending some quality time with the young woman. At the museum, Slade makes many comments mocking the gruesome nature of the exhibits. He does pause with a particular interest when he comes across five pictures on the wall of the Ripper’s victims. He snaps out of it, and again tells Warwick that the police will never catch the Ripper.

That same evening, the Ripper murders yet another woman. We then cut to Slade who is busy washing his hands in the river. Later that night, the Harley’s dog lets out a loud whimper which wakes Lily. She goes downstairs to find Slade burning some items of clothing, including his Ulster coat… and that coat appears to have blood stains on it. Slade shrugs it off as nothing more than some solution from one of his experiments, and because it’s dangerous, he needs to destroy the coat.

Meanwhile, Inspector Warwick is both jealous and suspicious of Slade. He goes to the University hospital that Slade claims to work at to check out his references. The man working there tells him that Slade is indeed part of the team, and that he’s a respectable worker with research that makes him keep very late hours.

That evening at the Harley home, Lily asks Slade to meet her backstage at the theater which he happily agrees to do. After Slade leaves for the evening, the Inspector shows up to see if Slade’s right thumbprint matches the one the Ripper left at the scene of one of his crimes.

He enlists Mr Hollis’ help to search Slade’s room where he discovers the picture of Slade’s mother in the desk drawer. Lily catches him red-handed, and then yells at Warwick to stop harassing an innocent man. Back at his office at the museum, when Warwick tries to match the fingerprint, his assistant notices the picture of Slade’s mother matches the Ripper’s first victim named Anne Lawrence. Her picture is one of the five that caught Slade’s attention the previous day.

As the two officers make their connection to the murders, Slade’s at the theater to see the show. However, when he observes all the lustful looks on the faces of the men in the audience as they watch Lily dance, something inside him snaps. When he goes to see her backstage, he tells her that he hates other men for looking at her in such a manner. He demands she run away with him somewhere—anywhere.

When she says no, he pulls a knife out of his pocket, and starts to cut her throat. Luckily for Lily, he cannot go through with it. He drops the knife and escapes out the window as the Inspector and other police kick open the door. They all chase after Slade through the streets of Whitechapel, but he manages to elude them.

He heads down to the river and sinks below its surface. Warwick and other officers jump in the water after him, but find nothing. Whether he lived or drowned that night, nobody will ever be able to say for sure. However one thing is clear—Slade was right—the police were never able to catch Jack the Ripper.