A young boy learns that he has extraordinary powers and is not of this Earth. As a young man, he journeys to discover where he came from and what he was sent here to do. But the hero in him must emerge if he is to save the world from annihilation and become the symbol of hope for all mankind. (Courtesy of Warner Bros. Pictures) 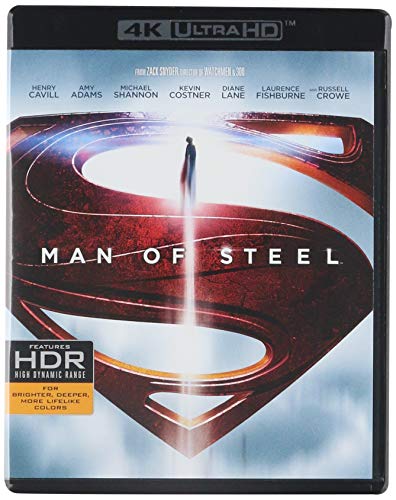 On the other side of the universe, the planet Krypton is on the brink of destruction. The planet’s core is destabilized from excessive mining. The chief advisor to Krypton’s supreme council Jor-El (Russell Crowe) recommends that the council give him control of the Kryptonian genetics codex, to preserve a Kryptonian society. However, a military coup overthrows the council before any action can be taken. The coup’s leader, General Zod (Michael Shannon), is an old friend of Jor-El. Zod has the councilors arrested. Jor-El realizes that Krypton is doomed and steals the genetic codex, which is sought by Zod. Joe-El infuses the codex into the DNA of his infant son, Kal-El, the first naturally born Kryptonian child in centuries. Zod kills Jor-El, who sacrifices himself so that his son may escape Krypton in a preprogrammed starship. Zod’s coup is eventually put down, and he and his soldiers are sentenced to exile in the Phantom Zone. Not long after, Krypton explodes, killing all the inhabitants.

Meanwhile, Kal-El’s ship follows Jor-El’s preprogrammed directions and crash lands on Earth in Kansas. The young Kal-El is found by a childless couple, Jonathan and Martha Kent (Kevin Costner and Diane Lane). The couple decides to raise Kal-El as their own child and rename him Clark Kent. As Clark grows, he becomes increasingly isolated as a result of his developing superhuman abilities such as super hearing, x-ray vision, and super strength. His abilities cause him to retreat from others. Once he is older, Clark learns of his otherworldly origin from Jonathan who urges him to keep his powers hidden. When Clark (Henry Cavill) is an older teen, a tornado hits near the Kent home. Jonathan is endangered, but directs his son not rescue him as that it might reveal Clark to the world before he’s ready. As a result, Jonathan is killed. Clark is overwhelmed with guilt and looks for a new purpose for his life. Clark leaves the Kent farm and his adoptive mother and travels the world for several years under aliases, occasionally using his superhuman abilities to save others.

There’s only one way this ends, Kal. Either you die, or I do. General Zod

Meanwhile, Daily Planet reporter Lois Lane (Amy Adams) receives an assignment to investigate the discovery of a Kryptonian scout ship in the Canadian Arctic. Clark is also at the discovery site working as a laborer. Clark enters the ship and activates its central computer using a key left by Jor-El. The key allows Clark to communicate with the artificial intelligence (A.I.) that takes the form of his late biological father. The A.I. Jor-El explains that Kal-El’s father sent him to Earth to guide its people. It presents Clark with a Kryptonian uniform bearing his family’s symbol, which means hope. Lois sees Clark enter the ship and follows him. However, the ship’s security system detects her and moves to eliminate the threat. Clark uses his powers to save her. A short time later, Clark wears the Kryptonian uniform and tests his ability to fly for the first time.

Back in Metropolis, Lois tries to convince her editor Perry White (Laurence Fishburne) to publish an article on the incident in Canada, but he is not interested without further proof. Lois begins tracking down the mystery man who saved her life and tracks Clark’s origins back to his family home in Kansas. Lois tries to persuade Clark to let her write a story about him, but after hearing the story of Jonathan’s death, she decides to drop the story and keep Clark’s identity secret.

Meanwhile, Zod and his crew escape from the Phantom Zone and discover that Krypton has been destroyed. They intercept a transmission from the scout vessel and follow the signal to Earth. Once in orbit, they broadcast a global address demanding that Kal-El surrender himself and the codex to them or risk war. Without revealing his identity and wearing the Kryptonian uniform, Clark meets with General Swanwick (Harry Lennix) of the United State Air Force. Clark agrees to comply with Zod’s demands and Lois joins him as a fellow hostage.

Clark and Lois are taken to Zod’s ship in orbit. Once there, Zod reveals that he possesses several terraforming devices, the largest called a World Engine, which he salvaged from Kryptonian outposts throughout the galaxy. Zod informs Clark that he intends to use the devices to transform Earth into a new Krypton. The terraforming will destroy nearly all life on Earth. Zod’s science officer Jax-Ur (Mackenzie Gray) extracts information from Clark’s DNA to create the building blocks for new Kryptonian colonists for the new Krypton. These future colonists will hold to Zod’s idea of a society based on genetic purity.

While imprisoned, Lois places the Kryptonian key from scout ship into a key hole on Zod’s ship. The key transfers the A.I. Jor-El to Zod’s ship, which proceeds to assist Clark and Lois take over the ship and escape. Clark and Lois fly back to Earth and warn the United States military of Zod’s plans. Zod sends his troops down to Earth to retrieve Clark, who possesses the codex in his genes. Clark battles several of Zod’s soldiers, including Faora-El (Antje Traue), while they wear Kryptonian battle suits. Although they will ultimately possess the same abilities as Clark while on Earth, the Kryptonians have not had a lifetime to adapt like Clark has to their new abilities. The Kryptonians are forced to retreat.

At the same time, Zod deploys the World Engine which touches down in the Indian Ocean. The World Engine begins firing a beam through the planet towards the ship on the other side of the planet, which hovers over Metropolis. The beam begins to destroy large portions of Metropolis within seconds. Clark destroys the World Engine in India. At the same time, military forces led by Colonel Nathan Hardy (Christopher Meloni) and scientist Dr. Emil Hamilton (Richard Schiff) launch a suicide attack on Zod’s forces and are successful in sending the Kryptonians back into the Phantom Zone. Lois is knocked from their plane just before the Phantom Drive is activated, but Clark arrives in Metropolis and saves her before she plummets to her death.

Only Zod remains after the destruction of the Kryptonian ship. With no hope of reviving Krypton, Zod vows to destroy the Earth and all its inhabitants out of revenge. Zod’s body begins to acclimate to Earth’s yellow sun and acquires the same powers as Clark. The two Kryptonians battle across Metropolis, destroying many of the buildings in the city during their struggle. The fight concludes in a train station where Clark is forced to kill Zod by breaking his neck after the Kryptonian soldier tries to use his heat vision to kill several humans in the station.

Sometime later, Clark destroys surveillance drones that the military tries to use to gather information about Clark. Clark persuades General Swanwick to let him act independently, without surveillance, so long as he does not turn against humanity. Clark adopts the public identity of Superman. He acquires a job as a freelance reporter for the Daily Planet so that he can access dangerous situations without attracting attention. On his first day, he encounters Lois who recognizes him and welcomes him to the Planet.