In 1940, infamous Hollywood screenwriter Herman J. “Mank” Mankiewicz has become a Hollywood pariah. He is recruited by Orson Welles to write the screenplay to Citizen Kane, a film that is loosely based on the life of William Randolph Hearst, a man that Mank has a checkered past with. Mank isolates himself in Victorville and begins writing. He is visited by the people in his life who all encourage him to abandon the project. However, Mank continues to write his story, realizing that it may be the best thing that he has ever written. 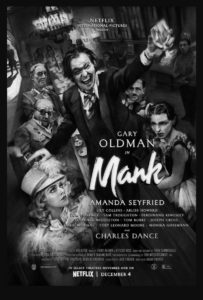 The year is 1940. Wunderkind film director Orson Welles (Tom Burke) is given complete creative freedom for his next film project for RKO Pictures. Welles makes the unusual choice of selecting Hollywood pariah Herman J. Mankiewicz (Gary Oldman) to write the screenplay for the film. Mankiewicz is not to receive screen credit for his work. Mankiewicz, better known as Mank, is placed into a small house in Victorville, California by Welles and RKO to work on the script and recover from a broken leg he sustained in a recent car accident. Mank is provided the services of a secretary, Rita Alexander (Lily Collins), whom he may dictate his ideas to.

During the writing sessions, Rita notices similarities between the main character of the script and William Randolph Hearst (Charles Dance), a powerful Hollywood mogul and millionaire. She worries about the repercussions of even writing a fictional screenplay about such a powerful individual. Welles’ producer, John Houseman (Sam Troughton), becomes concerned about Mank’s lack of consistent progress and the scripts dense, nonlinear approach to storytelling. Mank’s brother Joseph (Tom Pelphrey), who is also a writer, also worries that the screenplay may anger the powerful Hearst.

The film flashes back to 1930 when Mank was working as a screenwriter in Hollywood. A drunk Mank wakes near a film shooting on location. Mank encounters the female lead of the film, Marion Davies (Amanda Seyfried), who is the lover of Hearst. Marion introduces Mank to Hearst who takes a liking to Mank immediately. A few years later, Mank and his wife Sara (Tuppence Middleton) attend a birthday party for Louis B. Mayer (Arliss Howard), the head of MGM Studios. The party is held at Hearst Castle with many other Hollywood bigwigs. The attendees discuss the rise of Nazi Germany and the upcoming governor election in California, specifically candidate Upton Sinclair (Bill Nye). During the party, Mank and Marion stroll the grounds where they further discuss politics and the film industry.

You cannot capture a man’s entire life in two hours. All you can hope is to leave the impression of one. Herman J. Mankiewicz

Returning to 1940, Houseman’s impatience over Mank’s lack of progress on the script continues. Rita grows more concerned about the timing of the script, as well as Mank’s continued alcoholism. Despite everyone’s concerns, Mank finishes the screenplay by his deadline, and everyone is impressed with Mank’s work. Mank begins to regret agreeing to give up screen credit, but Houseman reminds him of his agreement.

Back in 1934, Mank and Joseph begin working for Mayer at MGM. At the studio, some executives, including Irving Thalberg (Ferdinand Kingsley), actively work against Sinclair’s campaign. Mayer has the studio produce propaganda films against Sinclair in a coordinated smear campaign. The films are funded by Hearst. Mank approaches Marion to get the films pulled from distribution. However, Marion states that she cannot help him having agreed to leave the studio for Warner Brothers.

Some time later, Mank and Sara attend an election night watch party at the Trocadero Nightclub, where Mayer announces the winner of the governor’s race, Frank Merriam. Mank is disappointed. However, Mank’s friend and colleague, director Shelly Metcalf (Jamie McShane), is even more disappointed by the results. Having been involved in the production of the propaganda films, Shelly grows despondent about his involvement and his recent diagnosis with Parkinson’s disease. In a drunken stupor, Shelly commits suicide.

In 1940, Charles Lederer (Joseph Cross) picks up the screenplay from Mank in Victorville and delivers it to the studio. Joseph visits his brother after reading the screenplay and warns him of Hearst’s reaction and the effects that it may have on Marion. Joseph concedes that the script is the finest thing that Mank has ever written. A few days later, Marion also visits Mank in Victorville and tries to persuade him to change the screenplay. Mank refuses, and Marion tells Mank that she will try her best to stop the picture from being made.

In 1937, Mank crashes a costume party at Hearst Castle, where he drunkenly pitches an idea for a film that he will go on to write in 1940. His behavior offends nearly everyone present at the party, including Hearst, Mayer, and Marion. Mayer lashes out at Mank and reveals that Mank is on Hearst’s payroll and calls him a court jester. Hearst calmly and politely walks Mank out of the residence and tells him the allegory about a monkey and organ grinder.

In 1940, Welles visits Mank in Victorville. He tells Mank that despite pressure from Hearst on him and the studio, Welles is determined to make the film and intends to do a rewrite of the script without Mank. Welles offers Mank a buyout from the studio to relieve him of any further writing responsibilities. However, Mank refuses the offer and reneges on his agreement to go without credit.

Mank tells Welles that it is the best thing he has ever written, and he is willing to sue to get his writing credit. An angered Welles points out everything that he has done for Mank before leaving angrily. Some time later, Mank and Welles win an Academy Award for Best Original Screenplay, the only Academy Award that Citizen Kane wins. Neither man is present at the ceremony. Each man makes statements to the press afterwards that show their resentment towards each other.