Also known as Babes in Toyland, Stan Laurel and Oliver Hardy bring their unique brand of humor to their roles of Ollie Dee and Stannie Dum. In the land of Toyland, Ollie and Stannie attempt to help their landlady, Widow Peep, pay off her mortgage to the evil landlord Barnaby. Through a series of misadventures, the duo attempt to break into Barnaby’s house, stage a fake wedding, and create and unleash an army of wooden toy soldiers. However, will the duo ultimately be the salvation or the damnation to the citizens of Toyland? 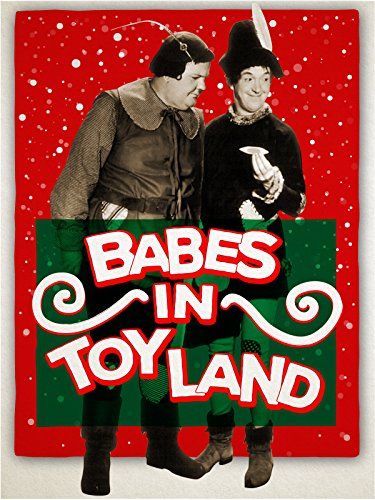 $4.99  in stock
BUY NOW
Amazon.com
*As an Amazon Associate we earn from qualifying purchases. 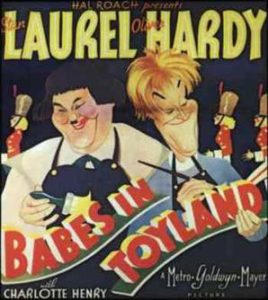 Stannie Dum (Stan Laurel) and Ollie Dee (Oliver Hardy) live in Toyland with most of the characters that we know from our old storybooks. Stannie and Ollie live in a shoe with Widow Peep (Florence Roberts), Bo Peep (Charlotte Henry), other random children, and a small mouse that looks like a pre-trademarked Mickey Mouse. Widow Peep’s mortgage is owned by Silas Barnaby (Henry Brandon), one of the wealthiest men in Toyland. Barnaby wishes to marry Bo Peep and proposes that if she agrees to marry him that he won’t foreclose on Widow Peep’s shoe. Widow Peep refuses the offer, but she has no idea where she will get the money from.

Ollie offers Widow Peep all the money that he has saved, but he is dismayed to learn that Stannie has taken the money to buy peewees, a toy that it is hit with a stick. Ollie comes up with another plan to get the money from his and Stannie’s boss, the Toymaker (William Burress). However, the Toymaker discovers that Stannie has mixed up an order from Santa Claus (Ferdinand Munier), building 100 wooden soldiers at six feet tall, instead of 600 soldiers at one foot tall). One of the soldiers wrecks the toyshop which results in Stannie and Ollie being fired without getting the money they need for Widow Peep.

Ollie and Stannie come up with another plan to sneak into Barnaby’s house and steal the mortgage while he sleeps. However, the incompetent duo is discovered by Barnaby who has them arrested on a burglary charge. Ollie and Stannie are sentenced to be dunked in the dunking stool and then banished to Bogeyland. However, once again Barnaby agrees to drop the charges if Bo Peep will marry him. Bo Peep reluctantly agrees to marry Barnaby to save her friend.

Her talking to Barnaby is a matter of pouring one ear into the other. Can’t be done. Stannie Dum (Stan Laurel)

At the wedding, Ollie and Stannie come up with a new plan. They have Stannie dress up as the bride for the ceremony, while Ollie gives the bride away. Before the ceremonial kiss, Ollie asks for the wedding present, Widow Peep’s mortgage, from Barnaby. Once Ollie has it, he tears it up and lifts the bride’s veil revealing Stannie. The destruction of the mortgage saves Widow Peep while Bo Peep is free to marry her true love, Tom-Tom (Felix Knight).

An angered Barnaby plans his revenge against the citizens of Toyland who cheered his misfortune. Barnaby frames Tom-Tom for the kidnapping of Little Elmer (Angelo Rossitto), one of the Three Little Pigs, going as far as to plant bacon and sausage at Tom-Tom’s home. Tom-Tom is placed on trial and convicted. The citizens of Toyland banish Tom-Tom to Bogeyland, the land of the bogeyman. Those banished to Bogeyland never return and are presumed to be eaten by the bogeyman. Bo Peep follows Tom-Tom into Bogeyland, not wanting her love to be left to die. Meanwhile, Ollie and Stannie discover that the evidence against Tom-Tom is fake when Stannie eats the sausage and discovers that it is made of beef not pork. They search Barnaby’s house and find Little Elmer hidden in the cellar.

The town of Toyland go on a manhunt for Barnaby who is forced to flee to Bogeyland through a secret passageway in the bottom of his empty well. Ollie and Stannie pursue him into the passageway. At the same time, Bo Peep finds Tom-Tom in Bogeyland and informs him of Barnaby’s deception. Barnaby catches up to Tom-Tom and Bo-Peep and attempts to abduct Bo Peep. He and Tom-Tom engage in a fist fight, and Tom-Tom emerges victorious. A defeated Barnaby grabs a large stick and proceeds to beat a stalactite to summon an army of bogeymen. The bogeymen chase Bo-Peep and Tom-Tom who run into Ollie and Stannie. The foursome escape through the well back to Toyland.

Back in Toyland, the citizens of Toyland rally to apprehend Barnaby. Ollie and Stannie tell their tale to the King of Toyland, Old King Cole (Kewpie Morgan). At the same time, Barnaby leads an invasion of Toyland on a fleet of rafts from Bogeyland. Two bogeymen scale the wall and open the gates to Toyland. The townspeople flee in panic as the bogeymen army attacks. Ollie and Stannie run and hide in the toy shop. They fight off bogeymen with boxes of darts thanks to Stannie’s skill with the peewees. Ollie and Stannie eventually activate the wooden soldier army.

The wooden soldiers attack the bogeymen with the bayonets of their rifles. Barnaby is defeated and trapped. He is covered by blocks that spell “rat”. Meanwhile, the bogeymen army retreats and flees back to Bogeyland, where the land’s hungry alligators feast on them. Ollie and Stannie attempt to give the retreating bogeyman one last shot of darts from a cannon, but the barrel flips backwards and shoots Ollie in his rear end and back. The film ends with Stan pulling them out one by one as Ollie grimaces in pain.