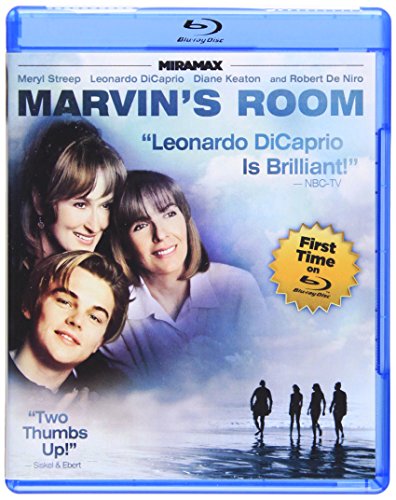 Echo Bridge Entertainment has announced that they will bring the drama Marvin’s Room to Blu-ray this March.  The film is directed by Jerry Zaks and is based on the play by Scott McPherson.  Marvin’s Room stars Meryl Streep, Leonardo DiCaprio, Diane Keaton, and Robert DeNiro. The film will hit stores on Blu-ray on March 26, 2013.

In Marvin’s Room, a man who had a stroke 17 years ago is left incapacitated and bed-ridden.  He has been cared for by his daughter Bessie (Keaton) in their Florida home, and totally ignored by his other daughter, Lee (Streep), who moved to Ohio with her husband 20 years ago and has never contacted her family.  Now, however, Bessie’s doctor has informed her that she has leukemia and needs a bone marrow transplant. So she turns to her sister for help.  Lee, in turn, turns to her son Hank (DiCaprio), who has been committed to a mental institution for setting fire to his mother’s house.  When Lee finds that she may have to take over her father’s care, she at first begins shopping around for nursing homes.  Eventually, however, the once-estranged family grows close.  Hume Cronyn, Cynthia Nixon, and Kelly Ripa co-star in the film.

Marvin’s Room was released in December 1996 and grossed over $12 million at the box office.

City Slickers II: The Legend of Curly’s Gold (1994) Gets a Blu-Ray Shout Out

City Slickers II: The Legend of Curly’s Gold (1994) Gets a Blu-Ray Shout Out