A brilliant young inventor named Lewis sets off on a time-traveling quest to save the future and find the family he never knew. With the help of the wonderfully wacky Robinson family, Lewis learns to keep moving forward and never stop believing in himself. 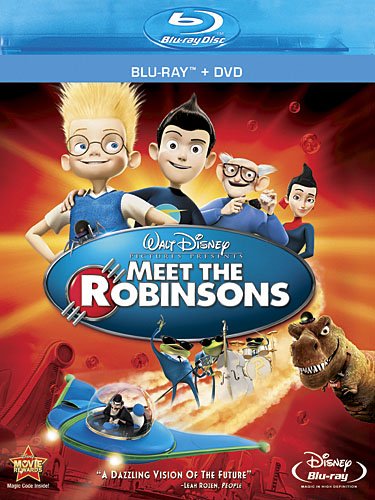 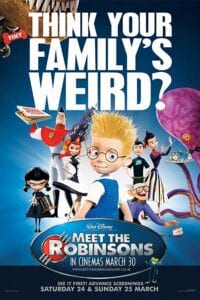 Meet the Robinsons starts with Lewis, a 12-year-old aspiring inventor, who lives at an orphanage. All Lewis has ever wanted is a family to call his own. He uses his free time to tinker away on a scanner he’s inventing to locate the only memory in his head of his mother. She abandoned him on the steps of the orphanage when he was a baby. He believes a reunion with her is still possible if somehow he can just find that memory.

Lewis’ roommate, Mike ‘Goob’ Yagoobian, is going crazy from a lack of sleep due to Lewis’ constant tinkering on his invention. This causes Goob to fall asleep during the most important Little League game of his life.

Lewis takes his scanner to the school’s science fair where he meets an odd 13-year-old boy named Wilbur Robinson. Wilbur claims to be a time cop from the future. He’s looking to retrieve a time machine that a guy wearing a bowler hat stole from him. Lewis pays Wilbur little mind, and continues on trying to make his scanner work.

When he tries to demonstrate it at the fair, he finds that the Bowler Hat Guy has sabotaged it, and it falls apart. This failure sends the fair into a bit of chaos, and Lewis runs back to the orphanage terribly discouraged. The Bowler Hat Guy uses his robotic bowler hat named Doris to steal what remains of his scanner.

Wilbur goes after Lewis at the orphanage, and asks him for help. To prove he’s not lying to Lewis, Wilbur takes him to the year 2037 in a second time machine. When they arrive, the two boys get into an argument, and crash the machine; trapping Lewis in the future.

With the time machine broken, Wilbur asks Lewis for help repairing it. Lewis agrees on one condition; Wilbur must take him to the past visit his mother afterwards. Wilbur agrees, and then hides Lewis in his garage.

Lewis doesn’t stay in there very long, and winds up meeting the whole Robinson family except for Wilbur’s dad, Cornelius, who’s off a business trip. By now, the Bowler Hat Guy and Doris arrive back to the future, and try to kidnap Lewis. However, the Robinsons are there to defend him.

While the Robinsons would like to adopt Lewis, they can not do it. Lewis soon discovers that he is Cornelius Robinson in the future, and Wilbur is his future son.

Also, the Bowler Hat Guy is a grown-up Goob, Lewis’ roommate. Lewis’ constant tinkering on inventions caused Goob to fall asleep in his baseball game, and miss the game-winning catch. He now blames Lewis for his misfortune, and became so bitter that nobody ever adopted him, and he remained there long after it closed its doors for good.

His hat Doris is DOR-15; one of Lewis’ failed inventions. Once Doris and Goob decided to team up to ruin Lewis, they stole the memory scanner; altering the future to a world where Doris’ clones enslave could humanity.

Now, Lewis repairs the second time machine, and comes one on one with Doris. He promises to never invent her, and thus destroys her. The future is restored to all its glory. With a little prodding from Lewis, Wilber goes to ask adult Goob to join the family. However, he’s nowhere to be found.

Lewis finally meets Cornelius, and he explains to Lewis how the memory scanner started their successful career. He inspires Lewis to return to the science fair before Wilbur takes him back. However, Wilbur makes one stop first. He takes Lewis back to the orphanage the moment his mother abandoned him.

Wilbur drops Lewis off in his present day, and leaves goes home. Lewis heads back to find Goob and help him stay awake during his game.

Back at the science fair, Lewis demonstrates his scanner one more time, and it works. One of the judges named Lucille Robinson adopts him with her husband Bud. She nicknames him Cornelius, and he gets the home he’s always wanted.