Leonard is a man with a very rare disorder; he no longer has the ability to form new memories thanks to one violent act from an unknown assailant. Ever since the night someone murdered his wife and left him for dead, anyone Leonard meets or anything he does, quickly vanishes from his mind. He no longer knows who his friends are, his enemies, or what is fact. This complicates things greatly as he seeks justice for his wife’s death. 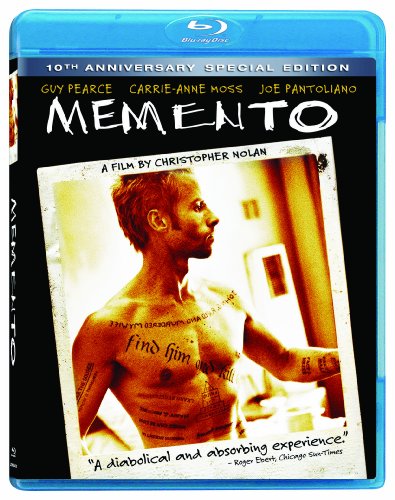 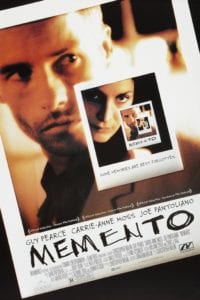 Memento is the tale of Leonard Shelby, an ex-insurance investigator, who suffers from anterograde amnesia after two men attacked him while he tried to defend his wife from them in the middle of the night. While he manages to kills one of them, the other escapes, and Leonard commits to spending the rest of his life finding that other killer.

The film is really two interwoven stories: one proceeds chronologically in black and white, while the other unfolds in reverse order which is in color. The two stories eventually merge into one when the black and white storyline meets the color one.

To make more sense of the story, this summary will present the story chronologically as opposed to the interwoven nature of the film.

The Black and White Memento

Memento begins chronologically in black and white. Leonard Shelby wakes up at the Discount Inn with no recollection as to why he’s there. The phone rings, and Leonard speaks to an unknown person where he tells them he suffers from anterograde amnesia.

He tells them the story of Sammy Jankis, a man he knew from when he worked in the insurance industry. He too suffered from the same type of amnesia, but Sammy had a diabetic wife, and she tested Sammy’s condition; asking him to give her insulin shots in hopes he’d remember already giving her them. He not only didn’t remember, but he ended up giving her so many that she fell into a fatal coma. Sammy was taken to a mental institution shortly thereafter.

Leonard himself now relies on an elaborate system of notes, photos, and tattoos to remember the most important things, so what happened to Sammy does not happen to him. His main tattoo says, “JOHN G. RAPED AND MURDERED MY WIFE” to keep him aware that he’s looking for his wife’s killer.

Leonard continues on with the Sammy story, and he says that he concluded Sammy’s condition was psychological; not physical, so he denied the insurance claim as Sammy was not covered for mental illness.

The chat then switches to Leonard’s search for his wife’s killer. The police do not believe him about a second killer. The caller claims to be a police officer, and gives him some new information about the case. He says that the second killer is a drug dealer, and goes by the name Jimmy Grantz. Furthermore, he wants to meet Leonard in the motel’s lobby.

In the lobby, Leonard meets Officer Gammell, but he insists Leonard call him his undercover name of Teddy. He gives Leonard the address to an abandoned warehouse outside of town where he can meet Jimmy.

Leonard goes there, and once Jimmy arrives, he immediately recognizes Leonard. He demands to know why Leonard is there, and not Teddy. Leonard picks up a tire iron, and orders Jimmy to take off his clothes.

Jimmy pleads for Leonard not to kill him, and offers to give him the $200,000 in the trunk of his car for payment of the drugs that Teddy was bringing. Leonard strangles Jimmy to death, and then takes a Polaroid photo of his body. As he puts on Jimmy’s clothes, the photo of Jimmy develops. The movie switches from black and white to color.

Now in color, the film proceeds in reverse chronological order. Leonard drags Jimmy down into the basement, and Jimmy whispers “Sammy” as his last word. Leonard decides that if Jimmy knew about Sammy, then he could not be the second killer.

Teddy next shows up, and does his best to convince Leonard that Jimmy was his man. Leonard doesn’t believe him, so Teddy cops to the fact that Jimmy Grantz was a drug dealer, but that he didn’t have anything to do with his wife’s murder. In fact, Teddy says his wife actually survived the attack.

Teddy also claims Sammy Jankis wasn’t even married, and Leonard’s wife was the one who was diabetic. Teddy knows because he says he was the officer who investigated his wife’s attack. He always believed Leonard about the second attacker, and they tracked him down more than a year ago, and killed the real John G.

Teddy says he’s the one who took the happy picture Leonard has of himself. He took it right after they killed John. Leonard then forgets about finding the attacker, and starts searching for John G all over again. Teddy says there’s so many John Gs in town to to find that even he’s one; his full name is John Edward Gammell. His mother calls him Teddy.

Before Leonard can forget, he adds a note on Teddy’s photo not to believe his lies. He also jots down Teddy’s license plate number as John G’s. He then leaves himself a reminder to get a tattoo of the plate number, SG137IU. Leonard grabs Teddy’s car keys, and tosses them into some weeds. He leaves his pickup truck at the warehouse; opting for Jimmy’s Jaguar.

Soon, Leonard forgets everything again, but he finds a tattoo parlor where he has the license plate number tattooed onto his leg. Teddy spots the Jaguar outside and comes in. He tries to ditch the car, and get Leonard into different clothes, but Leonard sees his note about Teddy on the back of his picture, and leaves without him.

Inside Jimmy’s coat pocket is a note from a Natalie telling him to head over to Ferdy’s Bar. Not remembering he’s wearing Jimmy’s clothes, Leonard thinks the note is for him. He goes to Natalie, and tells her about his anterograde amnesia. Natalie only believes him after a little test of her own.

Natalie lets Leonard stay at her home for a bit. There, Leonard again recounts what he remembers of his wife’s attack. He was sleeping and heard noise. He grabbed a gun, and after he finding someone strangling his wife, Leonard shot him. A second man came up from behind, and hit him in the head with something hard; smashing his face into a mirror.

Natalie uses Leonard’s disability to trick him into going after a man named Dodd. She says he’s been harassing her for money her boyfriend Jimmy owed him. As Leonard sets out to look for Dodd, Teddy is outside waiting for him. Teddy warns Leonard about Natalie, but he spots his note about Teddy not to believe his lies, so Leonard doesn’t believe him. However, Leonard decides not to stay with Natalie, and instead stays at the Discount Inn.

Although Leonard’s already paid for his room, Burt at the front desk takes advantage of his condition, and rents him a second room. Leonard then calls an escort service. When she arrives, he tells her that he wants only to relive going to sleep the night of his wife’s attack. Eventually, the woman wakes him, and he asks her to leave. He then takes some of his wife’s personal belongings to a reservoir where he burns them.

The next morning, as Leonard leaves the reservoir, Dodd spots him. Leonard escapes, and heads over to Dodd’s motel to wait for him. When Dodd arrives, Leonard beats him, and ties him up. Leonard calls Teddy for help, and when Teddy gets there, both Leonard and Teddy convince Dodd to leave town.

Thankful for getting rid of Dodd, Natalie lets Leonard spend the night at her place. In the morning, she traces the license plate number tattooed on Leonard’s leg. Later that day, Natalie calls Leonard to tell him the plate’s owner along with directions to an abandoned warehouse outside of town. A guy she knew used to do big deals there.

Leonard goes back to his motel where he puts two and two together. He figures that Teddy is John Edward Gammell, the second attacker. He calls Teddy, and they head to the same abandoned building where Leonard killed Jimmy Grantz a few days earlier. There, Leonard shoots Teddy in the head, but will he remember any of it in the morning?

User Rating: Be the first one !
May 6, 2019
6 minutes read
Show More
Back to top button
Close
Close