Carl and James are two garbage men with little to no ambition. In his free time, Carl spies on neighbors with his telescope. One night, he spots an unknown man accosting a cute female neighbor. She leaves and Carl shoots the man with a pellet gun. Unbeknownst to them, two men then strangle the man to death and leave with his body. The next day, they find the dead man in a can on their route. Afraid they could be implicated for killing him, the boys hide him and then set out to find the real killer with a crazy Vietnam vet named Louis. From there, they kidnap an innocent pizza man and save the environment from sinister ’80s industrialists. 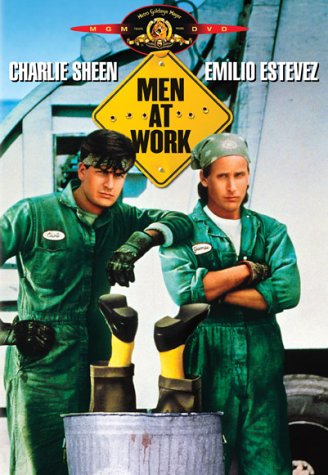 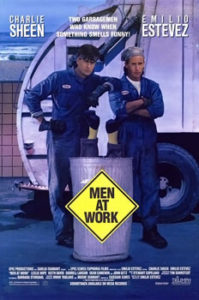 Carl Taylor (Charlie Sheen) and James St. James (Emilio Estevez) are two garbage men with a dream—a dream of owning a surf shop. At work though, the boys are more known for their mischief and complaints from the community than hard work. On their route, they frequently come across a local bike cop named Mike (John Putch). While he tries to bully them, the boys ignore him and golf clap him away,

Upon completing their shift, their boss puts them on probation for their poor behavior and tells them he will have someone ride with them on their next shift; his brother-in-law, Louis.

Once home, the two see and hear Jack Berger (Darrell Larson), a city councilman, pay a loud, frantic visit to a woman named Susan Wilkins (Leslie Hope), his campaign manager, in the set of apartments across from them. Jack made a tape that will incriminate Maxwell Potterdam III (John Getz) for dumping toxic waste in the local landfill, but Susan unknowingly took the tape home with her instead of her tape with some campaign commercials on it. Unfortunately, she doesn’t know this. Carl and James don’t know this either; heck, they don’t even know Susan.

Once Susan leaves the room to get Jack’s tape, Carl whips out his air rifle and shoots Jack in the ass. James and Carl then duck under the window sill to keep from being spotted. While they giggle, two of Potterdam’s goons, Biff (Hawk Wolinski) and Mario (John Lavachielli), show up and strangle Jack to death; taking his body and what they think is the incriminating tape with them. They then stuff Jack into one of the toxic waste drums and drive off. Down the road, the drum pops out of the car’s trunk and rolls to a stop at a pile of trash on Carl and James’ route. The goons never notice.

The next day, Carl and James meet Louis (Keith David), and the three head out for work where Louis will scrutinize their every movement. They find Louis to be a crazy Vietnam War vet and James doesn’t like him at all. Soon, the three men find the toxic barrel and the dead man inside. Carl recognizes the man as the guy he shot in the ass the previous night. Carl panics.

Louis tells the two Jack was strangled to death and didn’t die from Carl’s air rifle. Louis hates cops and demands no cops be called, but then bike cop, Mike and his partner, Jeff (Tommy Hinkley), show up to harass the boys. Once they leave, the boys take Jack home, toss a Nixon mask on him, and stash him in the bathroom. Carl goes across to Susan’s place, and the two hit it off. Meanwhile, Louis compounds their problems when he kidnaps the pizza delivery man (Dean Cameron) with Carl’s air rifle after he spots James with the dead body.

Meanwhile, meanwhile, Potterdam calls his goons to chastise them for bringing him the wrong tape and losing the dead body. He tells them to find Susan. Biff and Mario head over to Susan’s to kill her. Back at the boy’s apartment, Louis is having Nam flashbacks with his pizza prisoner. Over at Susan’s place, she decides to take Carl for a drive. By this time, James is hiding in his bathroom and tries to report a murder and kidnapping, but Louis breaks open the door with the phone cord unplugged.

He tells James they are leaving to follow Carl and Susan. They take the dead body and pizza delivery man with them. Just as they are leaving, Biff and Mario show up and recognize Jeff being carried by Louis. Also hiding in the wings is Frost and Luzinski. They are rival garbage men looking for revenge after Carl and James’ shitty prank. Everyone piles in their respective cars and the various chases are on.

Trying to keep up with Carl and Susan, James blows a red light in front of a cop car. The cops inside happen to be bicycle cop Mike and his partner, Jeff. Louis, pulls out the rifle and holds it to the pizza guy’s head. He forces Mike and Jeff to drop their guns, has them strip down to their boxers, and handcuffs them in a compromising position on some playground equipment at the park the happen to be in front of.

Frost (Geoffrey Blake) and Luzinski (Cameron Dye) find Susan’s car at the beach and the two tamper with it while she and Carl make out on the beach. At the same time, Biff and Mario catch up to Carl and Susan and take them prisoner at gunpoint and taserpoint. As the four walk back to the goon’s car, Biff and Mario argue. Mario shoots Biff with the taser, incapacitating him. Carl and Susan run, but as they approach her car, it blows up due to Frost and Luzinski’s tampering. The two run off on foot.

As they run, Carl tells Susan the truth about himself. All this time he’s lied to her, saying he was a doctor who lived in her building. They go to find the police for help, but only find the half-naked Mike and Jeff handcuffed in the park. They attempt to steal Mike’s car, but there’s too many keys on his keychain. As they fiddle with them, Biff and Mario show up with Mario driving. He tries to run them down, but they open the door in the nick of time and get in Mike’s car. Carl then drives it into the goon’s car.

By now, Potterdam and the rest of his squad arrive in a limo and they take Carl and Susan back to his evil industrial lair. As they are leaving, Louis and company arrive in their truck and follow. Back at the garage for the garbage trucks, Frost and Luzinski put acid on James’ truck’s brake line. The two have to hide quick because James, Louis, the pizza delivery man, and Jack’s dead body show up and drive off in it to raid the industrial lair because James has a plan.

Meanwhile, Potterdam orders his goons to stuff Carl and Susan into toxic waste cans where they will be dumped with the other waste. James arrives and breaks through the complex’s front gate. When he tries to slow down, he finds he has no breaks. They crash into a group of cans, setting the entire complex on alert.

Once stopped, the truck dumps its load onto Biff and Mario as they show up to investigate the ruckus. The pizza delivery man refuses to leave the truck so James and Louis go to find Carl. Potterdam orders his workers to take all the toxic waste immediately to the dump site; Carl and Susan’s cans included. However, when Carl’s barrel falls off the truck, its lid pops open and he’s freed. He and James reunite to save Susan.

They catch a ride on the truck that’s carrying her while rent-a-cops arrive to detain Louis. He takes the cops out before piling the pizza delivery man and Jack’s still dead body into it. They head out after Carl, James, and Susan.

At the dump site, Carl frees Susan as Louis, James, and the Pizza Delivery Man take on Potterdam and his goons. They throw Potterdam into the toxic water for a happy ending… well, a happy ending for everyone except for Mike and Jeff who wake the next morning, still in the park with a dog peeing on them.