Men in Black: International starts after an eye-opening encounter of the third kind. The secret MiB organization’s newest recruit, Agent M, finds herself under the wing of the heroic Agent H in cosmopolitan London. There a shape-shifting duo of intergalactic assassins executes an alien aristocrat. Now, with a devastating super-weapon of mass destruction hidden somewhere on Earth, the Men in Black leave no stone unturned to retrieve it. However, clouds of mistrust and a scent of betrayal envelop the once-incorruptible agency. There could be a well-placed mole in their midst! 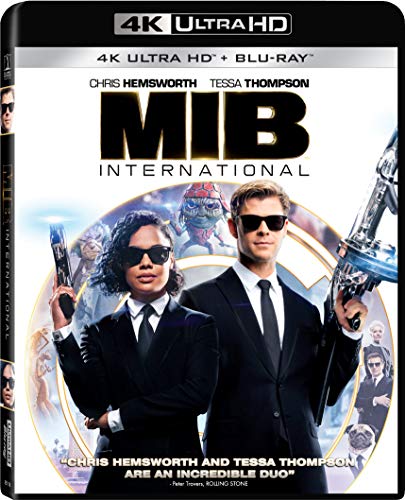 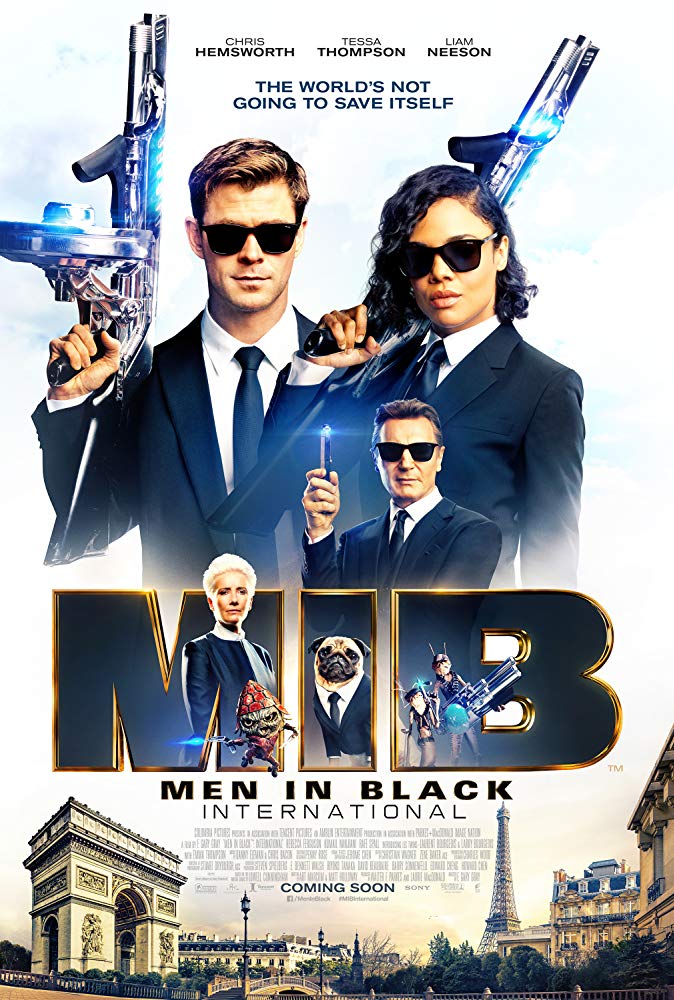 Men in Black: International starts off in the year 1996. In Brooklyn, Molly Wright is a precocious little girl who happens to see the Men In Black in action. Although her parents are neuralyzed by the MIB agents, wiping out their memory of the incident, Molly escapes having her memory wiped. Additionally, Molly helps a cute alien child escape capture by the mysterious agents.

The year is 2016. Agents H (Chris Hemsworth) and High T (Liam Neeson), both MIB agents, have traveled to the Eiffel Tower in Paris to stop an alien invasion by the Hive. The Hive is a parasitic race who invade planets by merging with the DNA of conquered species. The Hive use a wormhole to facilitate their invasion. H and T are able to stop the invasion and become famous for their exploits.

Twenty-three years after the incident in Brooklyn, an adult Molly (Tessa Thompson) attempts to get jobs with government agencies, such as the CIA and FBI, in the hope that it will lead her to the secret government agency that tracks aliens. However, whenever she brings up her belief in aliens to the interviewers, they think she is crazy. Molly is able to finally track the MIB agents back to their headquarters when she follows some agents back from an alien landing. After she is caught entering the agency, Molly is able to convince Agent O (Emma Thompson) to give her chance as an MIB agent. Molly becomes Agent M, is assigned probationary status, and is sent to the London branch for her first assignment.

Once in London, M meets High T, now head of the London Branch. She also meets H, who has now become an arrogant shell of his former self who is unconcerned with his duties and only keeps his job due to T protecting him. M arranges to be assigned to H’s latest assignment, a meeting with Vungus the Ugly (Kayvan Novak), a close friend of H and alien royalty. H, M, and Vungus get together at a club where they are approached by some mysterious alien twins who are able to manifest as pure energy. The aliens fatally injure Vungus, but before he dies, he hands M a crystal stating H has changed since they last met and he can’t be trusted with it anymore.

After their failure to protect Vungus, H and M are brought in front of High T, who plans to neuralyze the duo and fire them from the MIB. However, when M points out that only a few people knew Vungus’ location and that he was likely betrayed by a mole within MIB, High T reconsiders and assigns H and M to conduct an investigation. Meanwhile, a loyal agent, Agent C (Rafe Spall), is assigned to desk duty, with evidence suggesting that the alien energy assassins had DNA traces of the Hive.

H and M head off to Marrakesh, where they discover a small alien being who is the last survivor of a small group of aliens attacked by the energy twins. The alien’s queen was killed during the attack, so the alien pledges his loyalty to M who names him Pawny (Kumail Nanjiani). Soon after, H and M are attacked by other MIB agents who have been sent after them by C. C has watched the video footage of Vungus giving M the crystal and believes she is the traitor. Some of H’s alien contacts, Nasr and Bassam (also Kayvan Novak) provide H and M with a rocket-powered bike which allows the renegade MIB agents to escape capture.

Eventually, H and M crash the bike deep in the desert. While stranded in the desert, they learn that the crystal in M’s possession is a powerful weapon that uses the energy of a compressed blue giant star. While trying to make repairs on the bike, Bassam appears having hidden himself on a water canteen. Bassam steals the weapon and takes it to Riza Stavros (Rebecca Ferguson). Riza is an intergalactic alien arms dealer who just happens to be H’s ex-girlfriend.

H and M travel to Riza’s island in Naples. H, M, and Pawny attempt to infiltrate the base, but are discovered and captured by Riza and her thug henchman, Luca Brasi (Spencer Wilding). Luca is Riza’s second in command and one of her most loyal employees. When M realizes that Luca is the adult version of the alien that she helped escape when they were both children, Luca switches sides and allows the trio to leave with the weapon while keeping Riza occupied. While trying to get off the island, they are cornered by the energy twins, who are seeking the weapon for themselves. However, the twins are destroyed when High T and a group of agents show up and save H and M.

Initially believing that they have solved the case, H and M review their investigation back at the London headquarters and realize that the twins were not trying to get the weapon for the Hive, but to use against the Hive. When they check on the status of the weapon, they realize that High T has removed the weapon from storage and deleted the case file from the system. Agent C also comes to the same conclusion and informs H and M that High T has gone to Paris.

Fearful that High T is opening another wormhole for the Hive, H and M travel to Paris themselves. Along the way, H realizes that he was neuralyzed years ago during the first attempt of a Hive invasion, knowing that only High T could have wiped his memory. Once they arrive in Paris, they find that High T is the mole of the Hive. H and M fight to keep the wormhole from opening and allowing access to Earth by the Hive. During the battle, H is able to reach High T’s true self long enough for T to relinquish the ultimate weapon, allowing M to activate it. As a result, High T, the wormhole, and the Hive invasion force are destroyed.

With the Earth once again safe and the truth of High T’s treachery exposed, Agent O joins H and M in Paris. She grants M full agent status and directs her to return to New York. She also appoints H as the probationary head of the MIB’s London branch. Before M returns to New York, she takes one last road trip with H back to London and gifts Pawny to H to keep an eye on him.