In Mission: Impossible – Ghost Protocol, Ethan Hunt and the Impossible Mission Force (IMF) are back. This time, Ethan and the entire IMF are framed for a bombing of the Kremlin. After the President disavows the entire IMF, Ethan and his team must resort to using their skills and wits to track down a terrorist who is attempting to acquire a file of Russian nuclear launch codes in order to launch a missile and instigate a war between the United States and Russia. 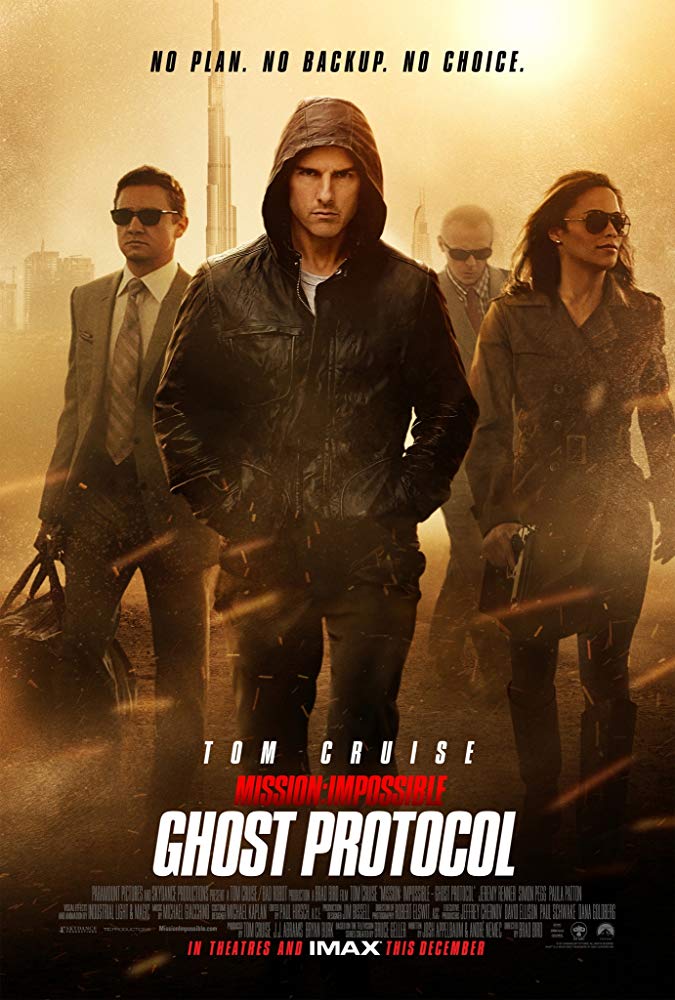 Mission: Impossible – Ghost Protocol begins when Trevor Hanaway (Josh Holloway), an IMF Agent, is killed in Budapest by assassin Sabine Moreau (Léa Seydoux). Sabine takes a file containing Russian nuclear launch codes from the dead agent. Sabine intends to turn the codes over to a man known only as Cobalt.

Next, IMF Agent Ethan Hunt (Tom Cruise) is incarcerated in a Moscow Prison. Ethan has purposely had himself placed there so that he ca find Bogdan (Miraj Grbić), a person who may have some information on Cobalt. Ethan and Bogdan are broken out of the prison by Jane Carter (Paula Patton) and Benji Dunn (Simon Pegg). After escaping prison, Ethan is debriefed by Jane and Benji as to the failure of their mission with Hanaway to acquire the file.

Ethan is ordered by IMF to infiltrate the Kremlin to gain more information on Cobalt. Ethan impersonates a KGB General and gets himself and Benji into the Kremlin. During the mission, one of Cobalt’s men also successfully infiltrates the Kremlin and after acquiring a package, begins broadcasting over an open frequency alerting both Ethan’s team as wells as the Russians that someone is in the building.

The unknown man indicates that he is preparing to detonate a bomb. Ethan and his team abort their mission, and Ethan is just barely able to escape the Kremlin before much of it is destroyed by a bomb. However, Ethan is knocked unconscious during the destruction. He awakens in a hospital and discovers that he has been captured by SVR agent Anatoly Sidorov (Vladimir Mashkov) and charged with destroying the Kremlin.

Ethan escapes the hospital. He calls into IMF for extraction and is picked up by the IMF Secretary (Tom Wilkinson) and his intelligence analyst William Brandt (Jeremy Renner) who happen to be in Moscow on other business. The Secretary informs Ethan that the President of the United States has initiated “Ghost Protocol”, an order that disavows the entirety of IMF. Brandt identifies Cobalt as Kurt Hendricks (Michael Nyqvist). Hendricks is a Swedish born Russian nuclear strategist who wishes to start a war between the United States and Russia.

It is determined that Hendricks used the Kremlin bombing to cover up his theft of a Russian-launch control device. Additionally, they discover Hendricks is planning a trade with Sabine at the Burj Khalifa in Dubai to acquire the launch codes recovered from Hanaway. Despite being disavowed, the Secretary orders Ethan to continue to pursue Hendricks. Sidorov’s men catch up to Ethan and the Secretary is killed. Ethan eludes Sidorov’s forces along with Brandt. The duo regroups with Jane and Benji and they make their way out of Russia.

The team makes it to Dubai. In a high-rise hotel, they use all their gadgets and disguises to make Sabine believe she is meeting with one of Hendricks’ men, Marius Wistrom (Samuli Edelmann), while simultaneously deceiving Wistrom of the opposite. Sabine figures out the ruse, which causes their plan to fall apart. Sabine attempts to escape but she is knocked out of a window by Jane and falls to her death, despite Ethan’s orders that Sabine be kept alive. Wistrom escapes with the launch codes. Ethan pursues but loses the terrorist in a dust storm.

When the team regroups, Brandt accuses Jane of letting her love for Hanaway and desire for revenge compromise the mission. However, Ethan confronts Brandt with the fact that he is hiding something due to Brandt having combat skills far exceeding a mere analyst. Ethan leaves the group to meet with Bogdan to see if he has anymore information on Hendricks. Brandt reveals to Benji and Jane that he once was an IMF Agent. He had been assigned to secretly protect Ethan and his wife Julia (Michelle Monaghan) while they were in Croatia. Julia was killed by a hit squad and Brandt carries the guilt for failing his assignment and causing Ethan’s loss. As a result, Brandt stopped being a field agent.

Meanwhile, Bogdan directs Ethan to Mumbai, where Hendricks is set to negotiate with an Indian telecommunications entrepreneur Brij Nath (Anil Kapoor). Hendricks seeks to acquire control of an obsolete Soviet military satellite. The IMF team comes up with a plan to stop Hendricks. Jane seduces Nath to get the satellite override code. Ethan, Benji, and Brandt are tasked with stopping Hendricks from using Nath’s broadcast station. When they arrive, they find that they are already too late as Hendricks has sent launch codes to a Russian nuclear submarine to fire a missile at San Francisco. Hendricks then disables the station’s computer systems so that the missile cannot be recalled or destroyed.

Benji and Brandt race to get the systems back online to send the override code while Ethan goes after Hendricks. Ethan catches Hendricks and they fight. Hendricks jumps to his death with the launch device to ensure that the missile reaches its target. Ethan uses one of the cars from the car park to disable the launch device and the missile mere moments before it was set to strike the city. Sidorov arrives in Mumbai having chased Ethan’s team from Russia. The Russian realizes that IMF is not responsible for the Kremlin bombing and lets the Agents go.

The team regroups in Seattle after the mission. Ethan accepts a new mission from Luther Stickell (Ving Rhames). Brandt confesses to Ethan about his failure to protect Julia and apologizes. Ethan reveals to Brandt that her death was a plot to give her a new identity and enable Ethan to infiltrate the Russian prison. Brandt accepts his next mission and returns to active agent status. Meanwhile, Julia arrives at the harbor and sees Ethan in the distance. They stare at each other for a moment before Ethan leaves for his next mission.