It’s Christmas Eve in Venice Beach, California where Philip runs a crisis hotline with two women named Catherine and Mrs Munchnik. As Philip’s landlord is set to evict him and his non-profit from the building, Catherine struggles with the loves in her life; namely Philip and a stalkerish young man named Louie. Louie also likes to write silly love songs to her. Eventually, we meet Gracie and Felix who are two destitute lovers fighting with each other as they are about to become parents. There’s also Chris, an unhappy man in drag who seems to have a fondness for Philip as well. Meanwhile, poor Mrs. Munchnik hasn’t had any sort of romance in a long, long time. Luckily for everyone, there’s a serial strangler on the loose, so be on the lookout for him. 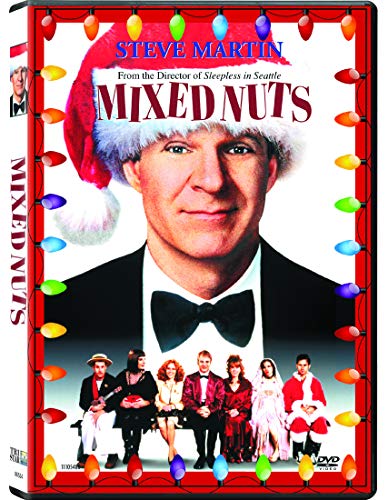 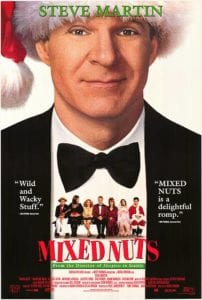 Mixed Nuts takes place on Christmas Eve in sunny California. Felix has been out of jail for seven months, but his wife, Gracie, is nine months pregnant. They argue in the street, and Philip, the owner of a suicide-prevention hotline called “Lifesavers” is there to calm them down.

Philip goes back to his office, and is promptly given an eviction notice by his landlord, Stanley. Philip has two employees, the neurotic Mrs. Munchnik, and the overly compassionate Catherine. He doesn’t tell them about the eviction because it’s Christmas.

The group receives many calls during the day from the depressed, lonely, and crazy. Also lurking somewhere in town is the “Seaside Strangler” who is setting all the ladies on edge.

During one call, Philip breaks the rules, and allows Chris, a butch transvestite, to come to the office. Meanwhile, Mrs. Munchnik gets trapped in an elevator as she leaves for Christmas dinner. Philip frees Mrs. Munchnik when Gracie shows up to talk to Catherine. Felix shows up too, but the violent Gracie throws a fruitcake in his face, and he gets a scratch on his forehead.

Philip and Catherine take Felix to a vet while Mrs. Munchnik and Gracie hang out in the office. While Felix is getting stitched up, he steals dog tranquilizers and overdoses, so he’s off to the hospital. Chris then shows up at Lifesavers where he’s not expected because Philip forgot to tell anyone he was coming.

Mrs. Munchnik thinks he’s the Seaside Strangler and faints. Gracie decides to leave at this point, but Philip arrives a bit later. Mrs. Munchnik wakes up in time to see the two men dancing, and she angrily leaves. As she sobs in the street, she meets Mr. Lobel, and takes hime to the beach, and bangs him in front of his dogs. Gracie and Catherine then return to the office, and Catherine is hot to trot!

Felix then returns…with a gun, and shoots Chris in the foot. Gracie gets the gun from Felix, and shoots it in the air like she just don’t care, but she also puts two bullets in the door. Conveniently, right as Stanley is about to ring their doorbell to help free Mrs. Munchnik who was freed hours earlier.

They open the door, and Stanley falls to the ground, dead. Catherine goes into shock, and runs into the bathroom. Philip falls in love with Catherine in the bathroom, and bangs her under the toilet. Gracie and Felix disguise Stanley as a Christmas tree, while Adam Sandler shows up with his shitty ukulele, and tends to Chris’ foot. There’s nothing quite like the awkward sexual tension between Adam and a butch transvestite.

The group decides to dump the disguised Stanley on the boardwalk, and just leave him there. On the way to the boardwalk, they run into two rollerbladers, and Stanley falls to the ground. The jig is up, but as the cops question everyone, they learn that Stanley is the Seaside Strangler, so instead of arresting Gracie for murder, she gets a quarter of a million dollars in reward money, and then goes into labor.

The film ends with smiles, a new baby, and Philip asking Catherine to marry him.