Modern Times focuses on the life of a factory worker on an assembly line. This job sees the Tramp screwing nuts at an ever-increasing rate as part of the assembly line. Additionally, he’s forced to use untested inventions like an ‘automatic feeding machine’ much to his peril. This leads to the Tramp’s nervous breakdown. After a stay in an asylum, the police mistake him as an instigator at a communist rally. They arrest him. Soon the Tramp meets the Gamin—the love of his life. The two takes several jobs to make a living in these modern times. 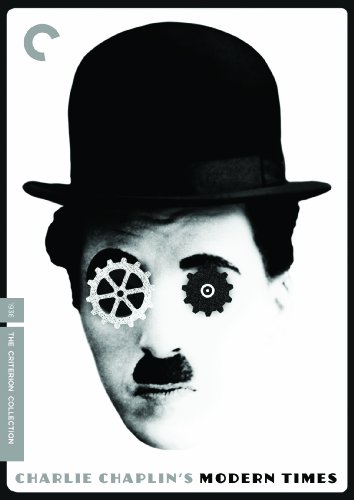 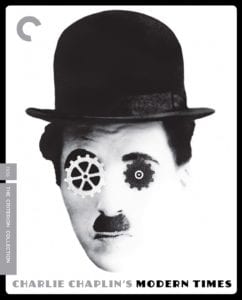 In Modern Times, Charlie Chaplin brings back his lovable Tramp persona—this time as a factory worker on an assembly line. Conditions are terrible too—one moment a malfunctioning machine forces him though it, and another, an assembly line quickly accelerates to an unmanageable speed as he tries to screwing nuts on its pieces.

The poor tramp eventually suffers a nervous breakdown from these inhumane demands industrialization creates. The little guy runs amok until he becomes stuck within one of the machines. It throws the entire factory into chaos.

The authorities briefly institutionalize the Tramp, and upon his release, he unintentionally finds himself in the middle of a communist workers march. Out front, authorities mistake take him as their leader. They hastily toss his butt in jail for being an instigator in a Communist demonstration.

Fun time in the pen

However, the Tramp actually enjoys his time in the pen. As usual, there are major mishaps, like accidentally ingesting smuggled cocaine after mistaking it for salt. However, when he stumbles upon a jailbreak, he doesn’t participate in it. Instead, he knocks the escaping convicts unconscious.

After he saves the jail guards from a prisoner revolt, they free him as a reward. Oddly, the Tramp argues, unsuccessfully, that he should stay there as he prefers it in jail. No such luck. They free him, and the Sheriff even gives him a glowing letter of recommendation.

Outside of jail, the Tramp then meets a homeless young girl, the Gamin. Someone recently murdered her father, and now she finds herself fleeing the police after stealing a loaf of bread for her and her younger siblings. The Tramp, still determined to go back to jail (and to save the girl) tells police that he’s the thief they need to arrest. However, a witness reveals his little lie, and the police free him.

Next, the Tramp eats an enormous amount of food at a cafeteria, and doesn’t pay to see if that gets him arrested. When he meets up with the Gamin, the police arrest them both. In true Little Tramp fashion, they make a clumsy escape.

Dreaming of a better life

The Tramp takes a job as a night watchman at a department store. He sneaks the Gamin into the store too, but soon encounters three burglars: one of whom is Big Bill, a fellow worker from the factory at the beginning of the film. He says they are hungry and desperate. After sharing drinks with them, the Tramp wakes up the next morning during opening hours, and the police arrest him once more.

Ten days pass and the Gamin takes him to a new home. It’s a run-down shack, but it’ll do. The next morning, the Tramp reads about an old factory re-opening. He lands a job there as a mechanic’s assistant. After his boss accidentally falls into the machinery, the Tramp gets him out. The other workers there suddenly decide to go on strike, and after the Tramp accidentally tosses a brick at a policeman, they arrest him yet again.

Another two weeks pass until they release him. The Tramp learns that the Gamin is now a dancer at a cafe. She gets him a job as a singer/waiter too. As usual, he’s quite clumsy at it.

During his floor show, he loses his cuffs which kept the lyrics to his song he was supposed to sing. So, he improvises the lyrics using a mixture of gibberish from multiple languages—plus some pantomiming—his shtick wins the crowd over.

As police arrive to arrest the Gamin for her earlier escape, the two must flee once more. The Garmin is downtrodden, but the Little Tramp encourages her to “buck up, we’ll get along”.

The two fade into the bright morning sun towards an uncertain, but hopeful future.

User Rating: Be the first one !
May 17, 2019
3 minutes read
Show More
Back to top button
Close
Close