James P. “Sulley” Sullivan and Michael “Mike” Wazowski are two monsters who live in Monstropolis. They work for Monsters, Inc., a company that harvests children’s screams to power their world. After Sulley accidentally allows a human child into the monster world, he must return the child to her home without anyone knowing that she was there. However, when Mike and Sulley encounter an evil plot to kidnap little children into Monsters, Inc., they are forced to not only save the human child Boo, but to protect all the children of the human world. 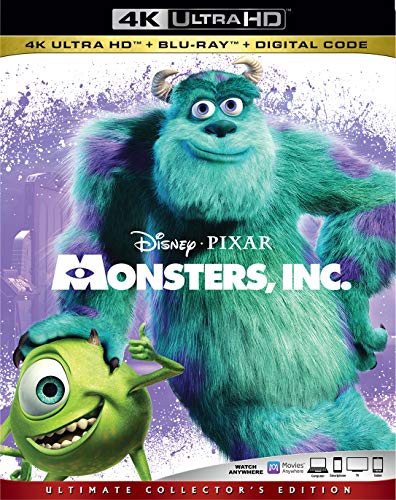 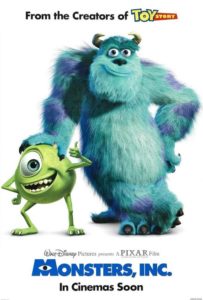 Monstropolis is a city in the world inhabited entirely by monsters. The city is powered by energy from the screams of human children created by monsters who visit them during the night. The Monsters, Inc. factory employs a variety of monsters who work as “scarers” to frighten the children and harvest their screams. They use doors that activate portals to the children’s bedroom closets. As much as the children fear the monsters, the monsters are deathly afraid of the children, believing they are toxic.

Energy production at Monsters, Inc. is falling due to children becoming less scared of the monsters. This is occurring despite the all-time scream harvesting record being threatened by both James P. “Sulley” Sullivan (John Goodman) and Randall Boggs (Steve Buscemi), two of the most senior scarers on the scream floor. The company’s CEO, Henry J. Waternoose III (James Coburn), is determined to find a solution to the problem and vows to not let Monsters, Inc. go under.

Sulley’s partner is Michael “Mike” Wazowski, who he has known since college. One evening after work, Sulley finds that someone has left an active door on the scare floor. As he inspects the door on the human side, he inadvertently lets a small human girl into the factory. He tries to put her back into her world, but the little girl keeps coming back to her “kitty”. Randall comes onto the scream floor and sends the door back into the factory’s door storage vault. With no way to send her home, Sulley takes the girl out of the factory in a duffel bag. Sulley finds Mike, who is out on a date with his receptionist girlfriend Celia Mae (Jennifer Tilly). The child escapes in the restaurant causing an immense panic. The restaurant is shut down as the Child Detection Agency (CDA) is called in to decontaminate the restaurant. Mike and Sulley escape the restaurant with the child just before the CDA get there.

The pair take the child, now called Boo (Mary Gibbs), back to Mike’s apartment. They quickly find out that the child is not toxic, and that her laugher generates an immense amount of power. Mike is anxious to send her back to the human world, but Sulley grows attached to her. The next day, Mike and Sulley sneak Boo back into the factory disguised as a baby monster. They attempt to send her home, but Randall, who had been waiting in ambush for Boo, mistakenly kidnaps Mike. Randall straps Mike into the Scream Extractor which is a machine designed by Randall to extract screams from kidnapped children.

Sulley arrives before Randall can test the machine on Mike. Sulley distracts Randall and saves Mike from the experiment. Mike and Sulley go to Waternoose and tell him about Randall and his machine. However, Waternoose reveals that he is in cahoots with Randall and forces Mike and Sulley through an open portal to the Himalayas while keeping Boo with him. Once in the frozen tundra, Mike and Sulley encounter the Abominable Snowman (John Ratzenberger), who takes them in and tells them about a nearby village. Sulley realizes that he can use one of the closet doors in the village to return to the scream factory. Mike refuses to follow Sulley on his quest. The two friends become estranged.

Sulley returns to the scream factory and rescues Boo from the Scream Extractor. However, he is attacked by Randall who can turn invisible. Sulley is losing the fight until Mike returns and tries to reconcile with Sulley. He inadvertently helps Sulley overpower Randall. Mike and Sulley take Boo and escape into the vault containing the doors. Randall pursues them. Mike causes Boo to laugh which activates all the doors in the vault to open at once. Mike, Sulley, Boo, and Randall jump in and out of the human world using the various doors in the vault. Randall tries to kill Sulley, but Boo overcomes her fear of Randall and attacks him in defense of her “kitty”. Sulley and Mike trap Randall in the human world, where two humans living in a trailer from A Bug’s Life mistake him for an alligator and beat him with a shovel.

Mike and Sulley finally locate Boo’s door, but Waternoose, accompanied by the CDA, brings the door down to the scare floor. Mike distracts the CDA while Sulley escapes with Boo and her door. Waternoose is not fooled by the ploy and follows them into the simulation room. Once there, Mike records Waternoose declaring his plan to save the company by kidnapping children from the human world. The CDA and their lead investigator Roz (Bob Peterson) reveal themselves to be listening to the entire conversation. The CDA arrests Waternoose, who reprimands Sulley for destroying the company. Roz, who has been working undercover at Monsters, Inc., thanks Mike and Sulley for their help in stopping Waternoose. Roz allows Sulley to return Boo to her home, but she has Boo’s door shredded afterwards to prevent any other monsters from contacting her.

Sulley comes up with a plan with Mike to retool the company’s power generation method to harvest children’s laughter instead of screams, which is more potent. With the energy crisis solved, Sulley is named the new CEO of Monsters, Inc. Mike’s comedic timing makes him one of the biggest producers for the company. One day, Mike takes Sulley aside and reveals that he has reassembled Boo’s door. It needs one final piece in order to work, which Sulley took as a memento. Sulley replaces the piece into the door and then opens it. Once inside, a child’s voice exclaims “kitty” as a giant smile appears on Sulley’s face.