In Mortal Engines, hundreds of years after our civilization was destroyed, a new world has emerged. Large moving cities travel the surface of the Earth while other cities hide behind giant walls. A mysterious young woman named Hester Shaw leads a band of outcasts in the fight to stop London – now a giant predator city on wheels – from devouring everything in its path. She is joined in her quest by a young historian, Tom Natsworthy, who may hold the key to stopping London and bringing peace to a war torn world. 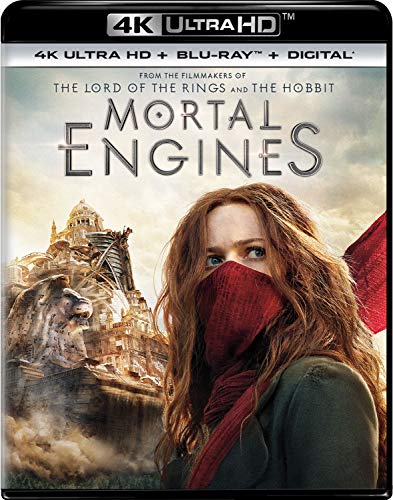 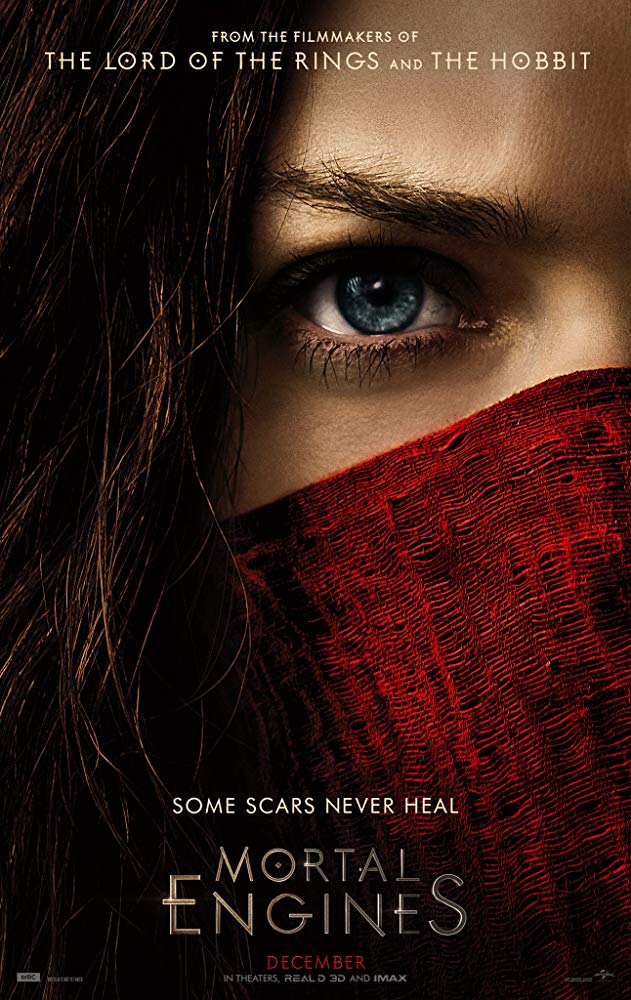 Mortal Engines takes place centuries into the future after humanity has broken into several warring factions. Large groups of humans regroup and form mobile cites, called Traction Cities. Larger cities hunt and absorb smaller settlements ever expanding the larger mobile cities. In opposition to the Traction Cities are settlements called the Anti-Traction League, a group that has developed an alternative civilization consisting of non-mobile settlements. The largest of these settlements is Shan Guo, which is protected by a shield wall.

The mobile city of London captures a small mining town called Salzhaken, absorbing its population and resources. An apprentice historian, Tom Natsworthy (Robert Sheehan), is dispatched to the center of London to collect Salzhaken’s Old-Tech for London’s Museum. Old-Tech is remnants of 21st Century technology, such as cellphones and computers. He arrives just in time to see Hester Shaw (Hera Hilmar) attempt to kill Thaddeus Valentine (Hugo Weaving), the head of the Guild of Historians. Valentine is stabbed, but survives due to Tom’s intervention. Tom pursues Hester, but she escapes. However, she tells Tom that Valentine murdered her mother and scarred her face. Tom informs Valentine of what the assassin said and Valentine pushes Tom down a trash chute.

Tom and Hester both land in the same area of the wilderness. They are forced to work together to survive scavengers. Ultimately, they are saved by an elderly couple on a small vehicle called Scuttlebug. However, the couple turns out to be slave traders who lock Tom and Hester in a cell and head to Rustwater to sell the pair. While in route to Rustwater, Hester informs Tom that Valentine killed her archaeologist mother Pandora (Caren Pistorius) when she was a young girl. Hester states that Valentine stole some Old-Tech from her mother when he did so. Hester escaped with her mother’s necklace after being cut across the face by Valentine, scarring her.

Meanwhile, Valentine goes to a walker prison named Sharkmoor. Once there, he frees Shrike (Stephen Lang), a reanimated cyborg, who is on a mission to find and kill Hester. At the slave market on Rustwater, Tom and Hester are rescued by Anna Fang (Jihae), an Anti-Traction League agent. While the three attempt to escape, Shrike arrives and attempts to capture Hester, who reveals that she knows the cyborg. After Anna, Hester, and Tom escape, Hester reveals that Shrike found her after she escaped from Valentine as a child. The cyborg raised her. Hester promised to let Shrike turn her into a cyborg companion for him, but she broke that promise when she heard that London had entered the Great Hunting Ground. Hester could not give up on the opportunity to enact her revenge on Valentine.

Back in London, Katherine Valentine (Leila George), Valentine’s daughter, becomes suspicious of her father. An Apprentice Engineer Bevis Pod (Ronan Raftery) informs Katherine that he observed her father push Tom down the chute. The two explore the mysterious St. Paul’s Cathedral and discover that Valentine’s secret energy project is actually a weapon that he is developing.

Anna takes Hester and Tom to the airborne city of Airhaven. Once there, they meet with other Anti-Traction League members. They question Hester believing that she has the key to destroying the moving city of London. However, she has no answers for them. Tom, on the other hand, realizes that Hester’s mother discovered a computer core for MEDUSA, a quantum energy-based superweapon that was used to destroy entire cities during the Great War. Tom also realizes that the Guild of Engineers stole the remaining components from Tom’s museum workshop and built the weapon under Valentine’s orders.

Shrike catches up to them in the floating city. A fight breaks out and the gas balloons that keep the city afloat are ruptured or catch fire. A damaged Shrike catches Hester and Tom and knocks the young man unconscious. Shrike realizes that Hester loves Tom when she pleads with her former protector not to kill her friend. Shrike releases Hester from her promise and allows her and Tom to leave before he collapses and dies.

Anna, Hester, and Tom travel to the Shield Wall with the surviving Anti-Tractionists. They warn the leader of the Shan Guo of the approach of London and its new weapon. Meanwhile, Valentine takes control of London when he kills the leader and orders the city towards the Great Wall. Shan Guo launches their fleet of air ships to defend the city when they see the approach of London. However, the MEDUSA weapon destroys the fleet and blasts a hole in the Shield Wall.

Hester realizes that her mother’s neckless contains a crash drive for MEDUSA, which will destroy the machine and save Shan Guo. Hester, Tom, Anna, and the remaining Anti-Tractionists pilots lead a raid against London. Hester and Anna are able to infiltrate the Cathedral. Anna engages in a sword fight with Valentine while Hester enters the kill code into the MEDUSA machine. Hester is successful, but Anna is killed by Valentine. Valentine places London on a collision course with the Great Wall. Katherine helps Tom destroy London’s engines, bringing the city to a near stop. Valentine attempts to flee in an airship, but Hester catches him. Valentine reveals that he is Hester’s father, and the two fight on the airship. Tom rescues Hester just before he shoots down Valentine’s ship, which is crushed by London’s slowing tracks.

With their city destroyed, Katherine leads the surviving population of London towards Shan Guo where she makes peace with the Anti-Tractionists. Tom and Hester decide to leave in the airship and see the world.