Mothra vs. Godzilla begins when a hurricane blows Mothra’s egg off Infant Island; causing it to drift to Japan. Banzo Torhata wants to make money off the find, but when Mothra’s twin priestesses show up, they plead with him to return the egg. They say once the larva hatches, they will cause great damage in its search of food. Torahata refuses before trying to kidnap the fairies. So they track down two reporters named Ichiro Sakai and Junko Nakanishi to see if they can persuade Torahata to return the egg. Torahata still refuses! Elsewhere, Godzilla wakes to begin another rampage. Now, Japan’s only hope is for Mothra to return to save her unhatched offspring, and Japan in the process as well. 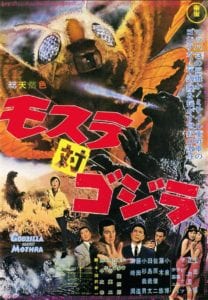 Shortly after a violent typhoon ravages the coast of Japan, a reporter, Ichiro Sakai, and photojournalist, Junko Nakanishi, discover a mysterious blue/green rock. That same day, a gigantic egg appears near the same coastline.

Local fishermen successfully capture the extraordinary egg and bring it to shore. Professor Miura, a local scientist, begins examining the egg and begins investigating its origins and contents. While the discussing theories with Sakai and Nakanishi, Mr. Kumayama, the owner of Happy Enterprises, purchases the egg from the local villagers for 1.2 million yen.

The very sleazy Kumayama has no intentions of allowing scientists to examine his new asset, as he plans to use it as the feature attraction in his amusement park. As Kumayama meets with the president of Happy Enterprises, Jiro Torahata, to discuss the egg, they are paid a surprise visit by the Shobijin, tiny twin girls from the Infant Island. The Shobijin make a failed attempt to retrieve their egg from Happy Enterprises and return it to its Infant Island home.

Kumayama and Torahata attempt to capture the Shobijin, but the singing duo are able to escape. The Shobijin eventually find safety and friendship from Sakai, Nakanishi, and Professor Miura. The twins explain that the egg belongs to Mothra, a gigantic winged insect that inhabits Infant Island.

They state that Mothra will come to protect its egg and they want return it to Infant Island before it hatches. They warn that the larvae inside of the egg would ravage Japan in search of food. Since they failed to retrieve the egg, the Shobijin decide to return to Infant Island in hopes of controlling Mothra.

Japanese scientists examine the mysterious blue/green object Nakanishi discovered and determine that it is radioactive. As they are reexamining the immediate area, Godzilla surprisingly rises from the ashes and begins destroying property all over Nagoya.

The professor and his journalist friends immediately decide to make a trek to Infant Island and beg the Shobijin for Mothra’s help in defeating Godzilla. They spin a tale that Godzilla will destroy Mothra’s egg and use this premise to ask for assistance. The Shobijin and island elders refuse to send Mothra to battle Godzilla, stating that Mothra is on her last wing and is spending her final days on the island’s sacred rock. The islanders know that if Mothra leaves Infant Island, she won’t return and only the egg larvae will be able to continue the Mothra legacy.

As Godzilla destroys yet another Japanese city, the military decides rolls out their forces in an attempt to destroy the giant radioactive monster. During the battle, the Happy Enterprises figureheads, Kumayama and Torahata, begin fighting over money that Torahata had embezzled from the company. Torahata shoots and murders Kumayama during their fight, but is immediately killed by Godzilla, when the “King of all Monsters” ravages through Torahata’s hotel.

As Godzilla makes its way towards Mothra’s egg, Mothra is scene flying her way towards Godzilla in an attempt to protect her young. Mothra begins blowing Godzilla away by flapping her wings as hard as she can in the King’s direction. However, the windstorm also blows Mothra’s egg off of its platform, towards the mountainside.

Mothra grabs Godzilla by its tail and drags it away from the egg, then sprays Gozilla with poisonous pollen. Godzilla fires back with a number of blasts, using its gamma rays. These blasts eventually ground Mothra, taking the winged insect’s life.

Godzilla successfully recovers from the titanic battle, but is immediately attacked, again, by the military’s planes and tanks. The military then attempts to electrocute Godzilla, using municipal power lines. They dropped three large nets on Godzilla, keeping him at bay, allowing the power lines to hit him with increased amounts of voltage.

However, they used too much power, blew up the towers, and allowed Godzilla to go free. As Godzilla continued his rampage, the Shobijin and other islanders push Mothra’s egg to hatch by using the islands magic powers. The egg eventually hatches revealing two larvae.

Godzilla heads his way towards the nearby Iwa Island, which is filled with stranded school children and teachers. As they struggle to seek refuge, the larvae make their way to the island to battle with Godzilla. One fearless larva attaches itself to Godzilla’s powerful tail, getting swung around.

Meanwhile, the other larva begins shooting Godzilla with its web until “The King” is completely encased in the webbing. Godzilla falls to the ground and rolls into the sea, defeated. The successful larvae and Shiobijin make their way back to Infant Island, securing peace for all of Japan once again.