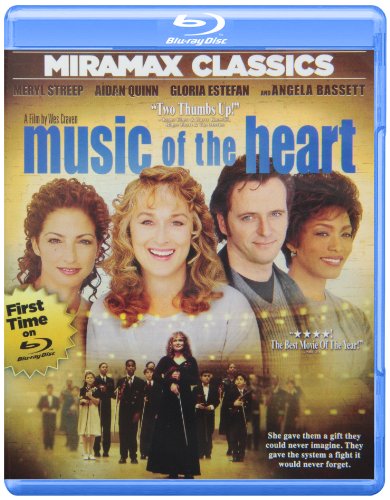 Music of the Heart [Blu-ray]

Echo Bridge Entertainment has announced that they are bringing the drama Music of the Heart to Blu-ray this March.  The film was directed by Wes Craven and stars Meryl Streep, Cloris Leachman, Angela Bassett, and Aidan Quinn.  Music of the Heart will be available in stores on March 26, 2013.

In the film, a single mother (Streep) of two young children, whose husband left her for a family friend, leaves the security of her small hometown and moves to East Harlem and begins teaching violin to support her family.  She didn’t have extensive experience to offer the school; she had her talent, her determination, and her violins.  At first, the kids, the parents, and the principal (Bassett) were skeptical.  But, Roberta taught with such passion that it was infectious and soon her young violinists were manifesting incredible results.  Despite her success, after 10 years of teaching, the Board of Education eliminates her position due to budget cuts, and Roberta fights back.  Based on the true story of Roberta Guaspari-Tzavaras and her passion for teaching.

Music of the Heart was released in October of 1999 and the film grossed over $14 million at the box office.  The film was nominated for two Academy Awards, including Best Actress (Streep).

Disclaimer: Affiliate links are contained in this post. This means when you click a link, and purchase an item, Movie House Memories will receive an affiliate commission. Advertisers and Affiliate Partnerships do not influence our content. See our Terms of Use about the inclusion of affiliate links on this site for more information.
January 20, 2013
1 minute read
Show More
Back to top button
Close
Close