When Satsuki and her sister Mei move with their father to a new home in the countryside, they find country life is not as simple as it seems. They soon discover that the house and nearby woods are full of strange and delightful creatures, including a gigantic but gentle forest spirit called Totoro, who can only be seen by children. Totoro and his friends introduce the girls to a series of adventures, including a ride aboard the extraordinary Cat Bus. 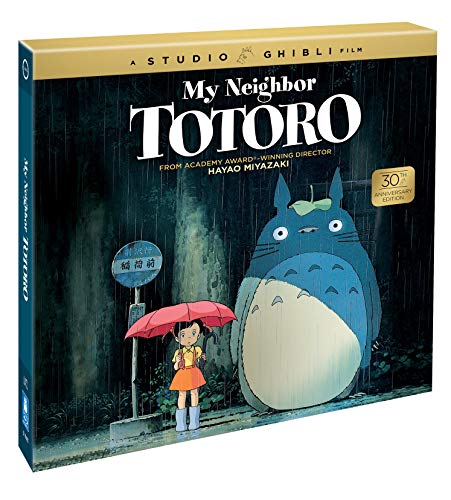 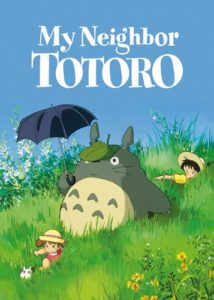 My Neighbor Totoro begins as 10-year-old Satsuki (Noriko Hidaka/Dakota Fanning) and her 4-year-old sister, Mei (Chika Sakamoto/Elle Fanning), ride in a moving truck with their father, Tatsuo (Shigesato Itoi/Tim Daly), down a dirt road towards their new home in the countryside. The girls are excited because their new house is closer to the hospital where their mother, Yasuko (Sumi Shimamoto/Lea Salonga) is being treated for tuberculosis.

Their new house is old and decaying, but the girls love it anyway. They open all the windows with their father downstairs before he asks them to find the stairs to the attic. He’d like them to open the window up there, but as the girls find the staircase, an acorn tumbles down and faint rustling can be heard above.

Nervous, the two yell at the darkness, but there’s no reply. So the two go up. As Satsuki opens the window on one side, Mei spots some black fuzz run into a crack in the the wall on the other side. She stares at it while Satsuki returns downstairs. Mei pokes the crack with her finger which startles the black sootballs inside. One pops out and Mei clasps it between her hands.

When she runs downstairs, she runs into the backend of her new neighbor, Granny (Tanie Kitabayashi/Pat Carroll). She’s been watching over the house while it was vacant. When she sees Mei’s hands and feet covered in black soot, she says the girls have discovered the soot sprites which like empty homes. She says they are nothing to worry about and will most likely leave now that they have all moved in. Her grandson, Kanta (Toshiyuki Amagasa/Paul Butcher), says the house is haunted, but Granny tells him to git before he can scare the girls.

That night, during the family bath, the wind rattles the house and beats on the loose shingles. This scares the girls a bit, but Tatsuo starts laughing and tells them to laugh as well. He says this will scare off the bad house spirits, and as they do, the tiny sootballs float off into the night sky.

Day breaks for the family’s first day in their new village. Satsuki packs a lunch for her family, and heads off to school. Tatsuo, who is a professor at a nearby university, works from home as Mei entertains herself outside. As she plays in the yard, two tiny white ears poke out of the grass. She watches as a semi-transparent creature walks past her towards the house. Mei giggles and takes chase. The little creature hides under the porch leaving Mei unable to follow, so she stares at the entrance.

The white creature eventually pops out on the other side, and this time it’s with a slightly larger version of itself with a bag full of acorns. As they attempt to sneak past Mei, she spots them and takes chase again. They go down a path which knocks Mei’s hat off. Eventually they all come to a large camphor tree where the two hop into a hole between some roots.

When Mei peers in, she falls into it, down a hollow tunnel, and lands in a mossy patch of earth. Sleeping across from her is a king-sized version of the creatures she followed. Thinking it’s cute, Mei tries to rouse it. The creature roars a few times, and Mei translates the sound to be his name which she thinks sounds like Totoro. Totoro goes back to sleep and Mei, who’s now on Totoro’s belly, falls asleep too.

When Satsuki returns home from school, she find Mei’s missing because her dad was too busy working to keep track of her. The two go looking for her until Satsuki finds Mei’s hat at a small path near the edge of the woods. They head down it only to find Mei sleeping in a clearing within the bushes. Once Mei wakes, she tries to retrace her steps back to the tree where she found Totoro, but she can’t find it again. Tatsuo says that she must have come into contact with a spirit of the forest, and that spirit doesn’t want to be found right now. They then pay their respects to those same spirits for watching over Mei.

The next day, the family does chores before taking a bike ride to the hospital to visit the girls’ mother. Once there, the girls tell their mother all about the new house, and Mei says that when Yasuko is well enough to come home, she wants her mother to sleep with her in her bed.

Some time passes and Satsuki is in class. Suddenly, she spots Granny outside with Mei because their father went into town for work at the university. Mei refuses to be with anyone but Satsuki, so Satsuki asks her teacher’s permission for Mei to stay the rest of the day in her class.

Later, as the two walk home, an afternoon thunderstorm hits. Drenched without an umbrella or raincoat, the girls take shelter under a roadside shrine. Kanta soon comes across them on his way home, and gives them his umbrella without saying a word. Satsuki and Mei later return the umbrella to Kanta’s mother as they head to the bus stop to wait for Tatsuo.

At the bus stop, the sisters wait in their rain gear. This time they have two umbrellas—one for the girls and one for their father. However, the bus is very late and Mei is sleepy. Satsuki gives her a piggy back and Mei falls asleep under the umbrella.

As Satsuki stands there in the rain, two clawed feet walk up and stand next to her. She looks out from under the umbrella to see Totoro waiting beside her with nothing to shelter him from the rain but a large leaf on his head. She gives him Tatsuo’s umbrella. The sound of the raindrops hitting it amuses Totoro greatly. He lets out a mighty roar before a set of headlights appear down the road.

Satsuki thinks it’s her dad’s overdue bus, but the one that shows up is large cat-faced bus. Totoro hands Satsuki a leaf-wrapped package before going inside it. Tatsuo soon arrives on the regular bus and apologizes for being late. Once home, the girls open their present which is full of acorns. The girls decide to plant them in the garden.

Days pass and the girls are a bit dismayed. The acorns haven’t sprouted yet. That night, Totoro and his two smaller Totoros arrive to the spot the acorns were planted. This wakes the girls who find the three are doing some sort of ritual. When the girls join them outside, the little saplings sprout. They then grow bigger and bigger into a gigantic tree. Everyone clings to King Totoro’s belly before he files into the air to the top of the branches. They then play music with some hallow gourds. The girls wake up the next morning to find the large tree gone, but the acorns have sprouted.

Close to summer, the girls are out with Granny on her farm, picking fresh vegetables. Granny says her vegetables will help their mother get better, but when a hospital telegram for Tatsuo (who’s off at work again) arrives, the news on it spoils their fun. Satsuki rushes to Kanta’s uncle’s house to phone her father that the message wants him to call the hospital. Tatsuo hangs up and calls the hospital before calling Satsuki back. Their mother has a small cold which will prevent her from coming home for the weekend.

As a disappointed Satsuki and Mei walk back home with Kanta, Satsuki snaps at her sister for throwing a tantrum over their mother being unable to visit. Back at Granny’s farm, Granny tells Satsuki that their mother should be fine. Satsuki, however, fears that her mother will die. When Mei sees her sister crying, she decides to take an ear of Granny’s special corn to hospital so her mother can eat it and feel better. She slips out without anyone seeing her leave.

By the time Satsuki notices that Mei’s missing, she’s nowhere to be found and the entire villages sets out to find her. Satsuki heads off on her own to find Mei, and is extra upset at herself for yelling at Mei.

While she’s out looking, someone finds a girl’s sandal floating in the pond which Granny thinks is Mei’s. However, when Satsuki returns to the group, she reassures everyone that’s not her sister’s sandal. With Mei still lost, Satsuki heads to Totoro and asks him for help. Totoro takes Satsuki to the top of his tree and roars out for the Cat Bus. It takes her straight to an exhausted Mei who’s sitting at the feet of a row of statues known to protect children. When the Cat Bus overhears the girls talk about the hospital, it offers to take the girls straight there.

The three perch themselves in a tree outside their mother’s window where they see Tatsuo visiting their mom. Mei leaves the ear of corn on the windowsill with a get-well message written on the husk before the Cat Bus takes them home.

The end credits show Mei’s and Satsuki’s mother finally headed home while Totoro and the other spirits watch them from afar.