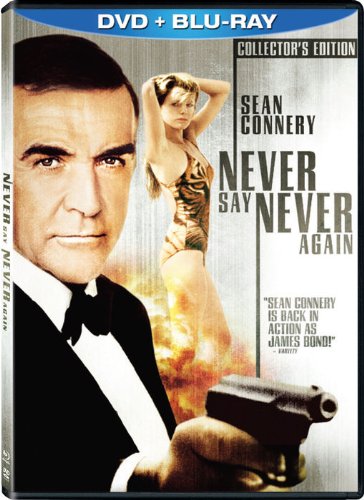 $144.95  in stock
BUY NOW
Amazon.com
*As an Amazon Associate we earn from qualifying purchases. 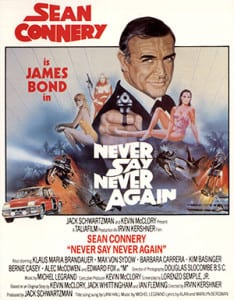 An aged James Bond is ordered into a health clinic to restore his health to a serviceable condition. While at the clinic, Bond sees a mysterious woman beating a US Air Force Captain who had an eye replaced to forge the President’s credentials to steal some nukes. The mysterious woman is Fatima Blush, an agent of SPECTRE.

SPECTRE has a plan to hijack some nukes and to use them extort the nations in a plan that is most definitely not code named Thunderball. With the nukes on the loose, the Brits reactivate the 00’s, Bond among them. While tracking the warheads, Bond comes into contact with Domino Petachi, the sister of the Air Force Captain with the presidential eye. Domino is the plaything of billionaire SPECTRE honcho Maximillian Largo. Largo is the force behind the nuclear plot.

Bond heads to Nice, France. When in France, Bond does as the French do and sneaks into a salon for some nonconsensual frottage with Domino. Bond learns that Largo will be hosting a card game and death ray video game fundraiser at a casino and shows up and shows up Largo at his own game. One thing leads to another, and Blush captures Bond in a car chase only to be killed by him with a Q-brand pen.

Bond and Felix Leiter chase Largo to North Africa where he’s hiding the second nuke. Largo punishes Domino by auctioning her off to some Arab men, but Bond rescues her and pursues Largo to his cave lair where the Navy wins a gunfight with SPECTRE. Bond chases Largo underwater and recovers the nuke. Domino gets her revenge when she pops Largo with a harpoon gun.