When charismatic but down-on-his-luck Stanton Carlisle endears himself to clairvoyant Zeena and her has-been mentalist husband Pete at a traveling carnival, he crafts a golden ticket to success, using this newly acquired knowledge to grift the wealthy elite of 1940s New York society. With the virtuous Molly loyally by his side, Stanton plots to con a dangerous tycoon with the aid of a mysterious psychiatrist who might be his most formidable opponent yet. (Courtesy Searchlight Pictures) 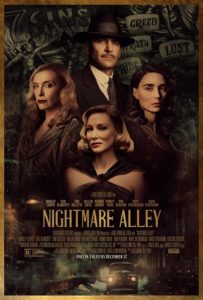 In 1939, Stanton “Stan” Carlisle (Bradley Cooper) puts a dead body in the floorboards of his home and burns it down. He leaves it all behind and takes a job as a carny with a traveling carnival. The first night there, he helps the carnival’s owner, Clem Hoately (Willem Dafoe), capture their featured geek (Paul Anderson) who escaped his cage. The sight of the man living in squalor, biting off the heads of live chickens to appease the crowd disturbs Stan tremendously.

These geeks are alcoholics or drug-addicted men with troubled pasts. Clem uses their addiction to offer them a temporary job. Once they depend on him, he physically and mentally abuses them until they sink into madness and depravity which creates this savage side-show attraction called a geek. We also find that Clem has moonshine he brews to keep some of the carnies under control. He keeps them in unmarked glass flasks in next to boxes of wood alcohol… which could kill a man.

Stan quickly finds himself part of Madame Zeena (Toni Collette) and her alcoholic husband Pete’s (David Strathairn) clairvoyant act. Zeena and Pete use a coded language to make it appear that she has extraordinary mental powers which Pete eventually teaches to Stan. However, both he and Zeena warn Stan never use these skills to make a what they call a Spook Show—leading patrons on about dead loved ones.

Also at the carnival is a performer named Molly (Rooney Mara) whom Stan becomes smitten with. He tells her about his idea for a two-person act which would get the out of the carnival. While intrigued, she doesn’t say yes at first. When she does, it happens to be the night Pete has Stan get him some of Clem’s alcohol. However, Stan accidentally (or not so accidentally) brings him the poisonous wood alcohol. The next morning, Zeena finds Pete dead and Stan and Molly leave the carnival behind.

Two years later and Stan is now The Great Stanton. His successful psychic act performs for Chicago’s wealthiest citizens with Molly as his assistant. By now, the two have mastered Zeena and Pete’s code and are making quite a bit of money. One night, though, psychologist Dr. Lilith Ritter (Cate Blanchett) interrupts their act in an attempt to expose their coded system. Stan has to use his skills of cold reading to make Ritter look like the fool and not him.

Ritter is there at the behest of the wealthy Judge Kimball (Peter MacNeill) whom he hired to test Stan. Now that Stan has passed, Kimball pays him a large sum of money to allow him and his wife, Felicia (Mary Steenburgen) to communicate with their dead son. Stan agrees even though Molly objects to the Spook Show.

Ritter invites Stan to her office even though she knows he’s a con man, but he intrigues her anyhow. Stan learns that she records all her sessions with her clients, and has a lot of sensitive information about various members of Chicago’s social elite. He suggests the two join forces to make a ton of money. She says she will help, but not for money. She just wants to record some therapy sessions with him where he must tell the truth. These sessions reveal Stan’s guilt over Pete’s death, his hatred of his alcoholic father, whom he killed at the start of the film, and that Stan NEVER drinks because of him.

Ritter’s help with Stan’s meeting with Kimball goes so well, Kimball introduces him to a man named Ezra Grindle (Richard Jenkins). He has guilt over forcing his young girlfriend, Dory, to have a miscarriage. Ritter warns Stan that Grindle is extremely dangerous, but Stan grifts the man anyhow. The pressure though starts to get to him and he begins drinking, even though he NEVER drinks.

However, Ritter doesn’t want to help Stan with information about Grindle because his men (or Grindle himself) have attacked her before, leaving a large scar down the front of her chest. Stan makes a wax impression of the key that unlocks the cabinet to all her recorded sessions (which Ritter may or may not have noticed him do) and he returns later to get the necessary information on Grindle.

Meanwhile, Molly’s been quite unhappy in Chicago and with Stan, himself. When Grindle demands Stan conjure Dory in the flesh or else, Stan’s suggestion that Molly pretend to be Dory is too much for her. She leaves him a “Dear John” letter and heads to the bus station.

Stan follows her to a men’s room at the station and begs her to stay. She only agrees after Stan cries to her not to leave him like everyone else in his life. She does as she’s told and shows up in Grindle’s garden at 8pm on the dot. Stan had planned to make Grindle get on his knees and pray when she appeared and when his eyes were closed, she’d sneak off. However, Grindle runs to her instead and hugs her waist.

Molly panics and says she can’t do it. Grindle comes to his senses and figures out he’s been had. He grabs Molly and slaps her. Meanwhile, Grindle’s bodyguard, Anderson (Holt McCallany) hears that police found Judge Kimball and his wife dead from a murder-suicide (which was due to Stan promising the Kimball’s that they would be reunited with their dead son in death). Anderson runs out to the garden to check on Grindle.

Back in the garden, Grindle threatens Stan and Molly. Stan snaps and beats him to death. As they head back to their car, Anderson catches up and shoots at them. Stan backs the car over him and then drives forward over him, killing him, dead. Once they get some distance behind them, Stan pulls the car into an alley and smashes the windows to make it looks like someone stole the car. Molly slaps him and leaves him forever.

Stan goes to Ritter for help, but learns she’s been scamming him the whole time. All the money he’s made from his con game in Chicago he’s kept in Ritter’s safe. He learns that she switched the stacks of $100 bills with $1 bills, leaving him almost nothing for his troubles. She tells him that he’s just a petty criminal and she will use her recordings of her sessions with him to prove to authorities that he’s a mentally disturbed person if he tries to implicate her in any of the crimes. Stan snaps for good when she shoots him in the ear. He tries to strangle her to death, but she’s had enough time to call the cops on him first. The cops arrive before he kills her and he then flees as they try to arrest him.

Stan makes it to a rail transport station and hides in one of the rail cars carrying chickens. The police don’t spot him and the train leaves, taking him to safety. Stan wanders around for some undetermined amount of time (years maybe), and he accepts his life as an alcoholic hobo.

After he gives away the only remaining possession he has left in life, his father’s watch, Stan finds a new carnival and asks for a job. The owner turns him away because he smells like piss, but before he lets Stan go, he offers him a drink. He then says he’s got a temporary job for a geek if he’s up to it. Stan accepts the offer, saying, “Mister, I was born for it.” He laughs and then cries as the film ends.