In 1950’s Detroit, a group of criminals are brought together to conduct an easy money blackmail heist. However, things turn sideways when one of the criminals, Curt Goynes, kills one of his accomplices rather than kill a family as he was ordered. Soon, Curt and his partner, Ronald Russo, finds themselves looking for mysterious document that maybe the ultimate payoff that they have been looking for their entire careers. However, they will have to avoid the entirety of the criminal underworld, the police, and a jealous husband if they want to get their money free and clear. 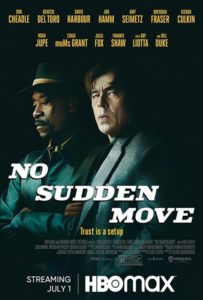 The film takes place in 1950’s Detroit. Gangster Curt Goynes (Don Cheadle) has recently been released from prison and wants to acquire some cash before he leaves town. Curt is recruited by a dirty cop named Doug Jones (Brendan Fraser) to be a part of a blackmail scheme. Jones promises that it is an easy three-hour job of babysitting. Jones pairs Curt with two other gangsters Ronald Russo (Benicio Del Toro) and Charley (Kieran Culkin). The trio is sent to the home of an accountant named Matt Wertz (David Harbour). Once there, Ronald and Curt are to hold Matt’s family hostage while Charley takes Matt to his office to acquire a document from Matt’s boss’ safe.

Matt does as he is told, but when he opens the safe, he finds it empty. Desperate, Matt brings fake documents to Jones before he returns home with Charley. Matt begins to figure out that Charley plans to kill him and his entire family. Once back at the house, Charley prepares to execute the entire family, much to the surprise of Curt and Ronald. Curt shoots and kills Charley rather than be a part of a massacre. Immediately afterwards, Doug phones the house after learning that Matt gave him fake documents. He orders Curt to kill the family and Ronald. Curt decides not to and instructs the Wertz family to tell the police that Charley was alone, and that Matt killed Charley in self-defense. Curt and Ronald take Matt’s car and begin driving around town to figure out who set them up.

The detective assigned to investigate Charley’s death is Joe Finney (Jon Hamm). Detective Finney is immediately skeptical of the family’s story and begins to follow the family around. After the police leave, Matt joins Ronald and Curt and the trio head to Matt’s boss’ house to retrieve the real document. They get the document after Matt beats up his boss. They discover that the document turns out to be plans for a new car part. Curt and Ronald learn that they have had a bounty placed on their heads. They arrange a meeting with Frank Capelli (Ray Liotta) to figure out what the document is worth. Capelli is the mob boss who contracted them for the blackmail scheme, and whose wife, Vanessa (Julia Fox), has been sleeping with Ronald. Frank is aware of the affair. Curt also makes arrangements with another mob leader, Aldrick Watkins (Bill Duke) to take part in the scheme in order to settle Curt’s debt, financial and personal, with mob boss.

Doug, Curt, and Ronald attend a meeting with Frank. Curt discovers that the document is worth far more than they thought it was worth. Frank attempts to kill Curt and Ronald using Doug as the hitman, but he fails, resulting in Doug’s death. Frank attempts to escape, but he is captured by Curt and Ronald. The pair torture Frank until he gives up the name of his contact. Curt calls the contact, Hugh Naismith (Kevin Scollin), who happens to work for Studebaker Automobiles. Naismith arranges to purchase the documents from Curt and Ronald for $125,000. When Curt and Ronald return to their car, they discover that Frank has escaped from the trunk. However, when Frank returns home, a battered and bruised Vanessa shoots and kills him. Ronald and Curt conclude that they can possibly earn more money for the document and return to Matt’s boss. They extract the name of the original owner of the document.

A short time later, Curt and Ronald arrive to a meeting at a hotel with an automobile industry executive referred to as “Mr. Big” (Matt Damon). Mr. Big gives the two small time crooks $375,000 to turn over the document. Mr. Big reveals that the plans are for a catalytic converter, which would greatly reduce fuel emissions in cars, but would cost the automobile industry more per car. Mr. Big seeks to conceal the existence of the plans from the public to prevent the government from pressuring the automobile industry to implement stricter pollution controls. Curt and Ronald turn over the documents and collect their money.

After Mr. Big leaves, Curt and Ronald attempt to split the money evenly but are interrupted by Watkins and his men. Watkins has already collected the $125,000 that Naismith had with him while he was waiting in the lobby of the hotel. Watkins takes Curt away at gunpoint, but Ronald is allowed to leave with the $375,000. As Watkins is leaving the hotel with Curt, he and his men are stopped by Detective Finney and his men. Watkins successfully bribes the detective with $50,000 to allow them to leave unmolested with Curt.

Meanwhile, Ronald flees the city with Vanessa. However, the couple is paranoid that they are being followed so they drive off the main road to avoid any pursuers. Once safely away from prying eyes, Vanessa kills Ronald and takes all the money for herself. As she drives away, Vanessa is stopped by a police officer who takes the money and allows her to leave. A short time later, Detective Finney privately returns the entire $375,000, the $50,000 bribe from Watkins, and $31,000 of Vanessa’s personal money to Mr. Big, Finney’s real employer. At the same time, Watkins leaves Curt in Kansas City with $5,000 of the money collected from Naismith. Curt walks away, free at last, with a little money in his pocket.