Emmy winner Bob Odenkirk (Better Call Saul, The Post, Nebraska) stars as Hutch Mansell, an underestimated and overlooked dad and husband, taking life’s indignities on the chin and never pushing back. A nobody. When two thieves break into his suburban home one night, Hutch declines to defend himself or his family, hoping to prevent serious violence. His teenage son, Blake (Gage Munroe, The Shack), is disappointed in him and his wife, Becca (Connie Nielsen, Wonder Woman), seems to pull only further away. The aftermath of the incident strikes a match to Hutch’s long-simmering rage, triggering dormant instincts and propelling him on a brutal path that will surface dark secrets and lethal skills. In a barrage of fists, gunfire and squealing tires, Hutch must save his family from a dangerous adversary (famed Russian actor Aleksey Serebryakov, Amazon’s McMafia)-and ensure that he will never be underestimated as a nobody again. (Courtesy of Universal Pictures) 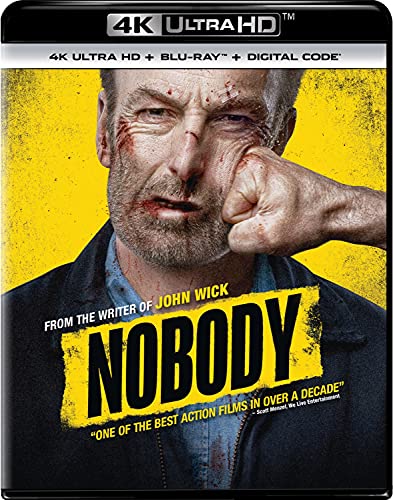 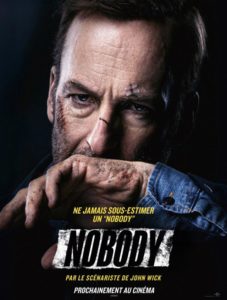 On the surface, Hutch Mansell (Bob Odenkirk) seems ordinary. He has two children, teenage Blake and elementary school aged Sammy (Gage Munroe and Paisley Cadorath), with his wife of several years Becca (Connie Nielsen). He works a tedious job as an accountant at his father-in-law Eddie’s (Michael Ironside) metal fabrication company. He follows an identical daily routine and does not stray from it. Hutch is also fighting the boredom of his world on a daily basis after living an exciting secret past.

One night, Hutch’s home is broken into by an armed man and woman (Edsson Morales and Humberly González). Hutch catches them but cooperates when they demand money from him. He turns over his watch and some petty cash the family has in a bowl on the counter. The couple begins to leave but Blake rushes out and tackles the man. Hutch has an opportunity to attack the couple with a golf club but decides not. Hutch tells Blake to let them go, and the burglars leave. After the incident, everyone, including Blake, Eddie, and Becca perceive that Hutch is a failure. Hutch contacts his supposedly deceased half-brother Harry (RZA) on a hidden radio in his office and explains that he held back because the robbers were desperate, scared, and using an unloaded gun.

Later that day, Hutch’s daughter Sammy asks for help finding her missing kitty cat bracelet which was last seen in the same bowl with the petty cash. Hutch doesn’t say a word and immediately leaves the house. He goes to see his elderly father David (Christopher Lloyd) who lives in a retirement home. David is a former FBI agent. Hutch asks to borrow his father’s badge and gun so that he can track down the burglars. After shaking down a few tattoo parlors, Hutch locates the burglars at their home. He demands the bracelet, but they claim that they don’t know what he is talking about. Hutch discovers that the couple’s baby is sick and suddenly leaves, feeling guilty for his actions. Hutch takes a city bus to get back home. A group of drunk thugs get on the bus and began harassing an attractive woman who has the misfortune of riding alone. Hutch takes out his frustration by beating the entire lot of them senseless, leaving one (Aleksandr Pal) breathing through a straw after Hutch crushes his windpipe. The display of violence gives Hutch a boost of self-esteem and perspective. Once home, he reconnects with Becca and the couple has sex for the first time in months.

Everybody dies… some sooner than others. Hutch Mansell (Bob Odenkirk)

Hutch’s adventurous night out does not go unnoticed. Harry contacts him the next day and warns him that he shouldn’t have messed with the Russians. Harry sends Hutch to visit “The Barber” (Colin Salmon), a dealer in information. The Barber informs Hutch that one his victims, the one with the crushed windpipe, is the younger brother of Yulian Kuznetsov (Aleksei Serebryakov), a notorious Russian crime lord. Hutch immediately heads home to protect his family. Meanwhile, Yulian learns about the assault on his brother. Yulian immediately has his people begin to investigate who put Yulian’s brother into the hospital.

Once Yulian has the information, he sends a hit crew led by his second in command, Pavel (Araya Mengesha), to capture Hutch at his home. Hutch sees them coming and places his family into a secret panic room in the basement of the house. Hutch kills nearly all the attackers as they enter the house, but Hutch is tased into unconsciousness and subdued by Pavel. The Russians place Hutch into the trunk of their car and begin to take him to Yulian. Hutch frees himself in the trunk and comes through the backseat with a fire extinguisher. He blinds the driver which causes the car to crash. Pavel and the other Russian passengers are killed. Hutch returns home and frees his family. He sends Becca and the kids away, and he promises his wife an explanation soon. Hutch then takes all the bodies to the basement and sets the entire house on fire before stealing his neighbor’s muscle car and hitting the road. Prior to leaving the house, Hutch finds his daughter’s missing kitty cat bracelet that set everything in motion under the couch.

The film then explains that Hutch is a former “auditor”, an assassin employed by intelligence agencies. Hutch relays a story of how he let one of his assigned targets go after the target vowed to change. Hutch found the target a year later and discovered that the target had made good on his word and reformed and started a new family. Hutch states that he desired the same life and decided to retire against the wishes of his superiors. He confesses that he may have over-corrected his personality a tad to suit his new life.

Hutch goes and buys Eddie’s company with a secret stash of gold bars, and then makes the factory into a kill zone with multiple booby traps. Hutch discovers that Yulian is currently assigned to protect the Obtshak, a large amount of Russian mob money that is periodically moved to protect it. Hutch breaks into the building and burns all the Obtshak and Yulian’s art collection. Hutch goes to Yulian’s nightclub and gives the Russian mobster a chance to walk away. Yulian chooses not to and pursues Hutch back to Eddie’s factory. David and Harry show up to help Hutch kill the Russians. The trio kill all the mobsters until only Yulian is left. Out of ammo, Hutch charges at Yulian with a Claymore mine attached to a pane of bulletproof glass and detonates it. Both men are thrown across the room, but only Yulian is killed. Hutch helps David and Harry escape so that he is the only one arrested for the massacre. While Hutch is being questioned by police, the detectives receive a call that implies that the government has intervened on Hutch’s behalf and no charges will be filed.

Three months later, a happy Becca and Hutch are looking at new houses when the real estate agent suddenly receives a call that is for Hutch. It is implied that Hutch has returned to his former government job as an auditor.

In a mid-credits scene, Harry and David are shown driving to an undisclosed location in an RV filled with guns.