Norbit is a mild-mannered man who gets a second chance at love with his childhood sweetheart named Kate. However, there’s one huge obstacle; a jealous, mean-tempered woman named Rasputia wants Norbit all to her sizeable self. Norbit does his best to win the heart of Kate before Rasputia puts the hurt on him in this classic comedy. 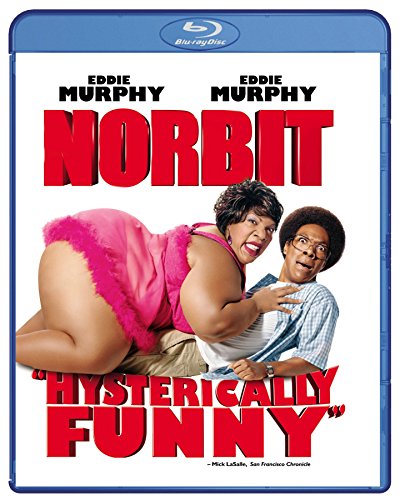 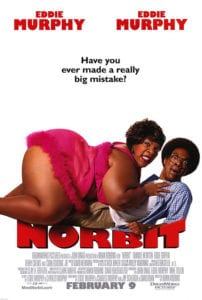 Norbit arrives on the step of Mr Wongs Chinese diner, doubling as an orphanage. He enjoys a happy life there while also making best friends with Kate, but eventually she leaves after she’s adopted.

Now dysfunctional and alone, Norbit stumbles through life. One day, Rasputia protects him from bullies in the playground, and they eventually end up getting married. However, Rasputia controls him, even into marriage.

She is bad news as are her troublesome brothers. After Norbit catches his wife in bed with her tap dancing instructor with bad teeth, Norbit leaves, and a car chase ensues. Then afterwards he disposes of the wedding ring into the rubbish.

Eventually, Kate returns all grown up in the form of too-good-for-this-movie, Thandie Newton. She introduces to Norbit to her fiance’ Dion (a lethargic Cuba Gooding Jr).

Now Mr Wong can no longer afford to continue running the the orphanage, Kate has thoughts to buy it. She gets hidden resistance from Rasputia’s brothers and a scheming Dion.

After spending more tome together, Kate teaches Norbit to ride a pushbike, among other things, including how to have fun and rekindle love. During a date at the local Italian establishment Norbit has frequented his entire life, the pair check out the church where Kate will marry Dion.

On the spot these two practice the vows with preacher, thus exchanging vows for fun but figuring out they are the two actually in love. Rasputia goes berserk noticing Norbit’s affection for Kate is real, and she tries hard to prevent their love.

In the face of Mr Wong’s orphanage turning into a strip joint, Kate and Norbit are forcefully separated. Norbit, on a late night walk, gains advice from Mr Wong who found from a background check on Dion a letter exposing him as a gold-digging serial marrier.

Storming the wedding before final vows, Norbit admits his love for Kate, and brings in Dion’s ex-wives to help him. Orphanage does stay open while Kate and Norbit live happily ever after.