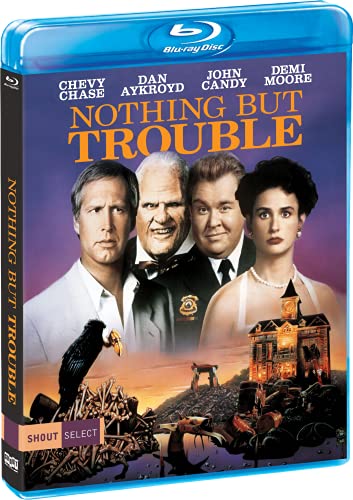 Nothing But Trouble [Blu-ray]

‘Nothing But Trouble’ Movie Summary 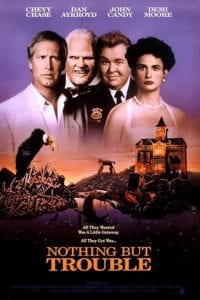 Chris Thorne is a financial publisher living in New York City who meets attorney Diane Lightson. She gets him to drive her to Atlantic City to yell at her ex-boyfriend, Bruce. Chris’ two clients, the Brazillionaire brother and sister Fausto and Renalda overhear their plans, and invite themselves along.

During the drive, Chris is pushed into taking a scenic detour which takes them to the little town of Valkenvania. He runs a stop sign in the shady town which gets everyone arrested by officer Dennis Valkenheiser. He takes them to his grandfather, the 106-year-old Judge Alvin Valkenheiser, and he gives the group a speedy trial. The Judge confiscates their ids and their lives.

The Brazillionaires manage to escape by striking a deal with Dennis to let him come along with them back to Rio. Chris is forced to marry Dennis’ mute twin sister Eldona while Diane plays cards with the Judge’s deformed grandchildren Bobo and Lil’ Debbull.

The Brazillionaires end up back in Rio de Janeiro with their new head of security (and quite possibly Renalda’s new boyfriend), Dennis. Chris and Diane go back home where Chris sees a news story on TV about the fire. He’s horrified to hear that the Judge has found his license with his NYC address, and that the Judge plans to live with Chris, his new grandson-in-law in New York. Chris runs off in horror, and breaks through his wall, leaving a hole in it like a cartoon character.