Fed up with crushing rocks on a prison farm in Mississippi, the dapper, silver-tongued Ulysses Everett McGill busts loose… except he’s still shackled to two misfits from his chain gang: bad-tempered Pete, and sweet, dimwitted Delmar. With nothing to lose and buried loot to regain, the three embark on a riotous odyssey filled with chases, close calls, near misses and betrayal. 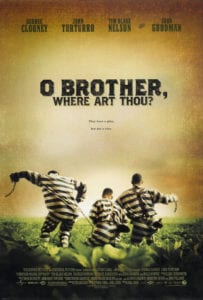 Ulysses Everett McGill breaks out of prison while he’s chained to Pete Hogwallop and Delmar O’Donnell. It’s 1937, and they got this de-pression on. The trio is pursued by mysterious lawman with blacked out sunglasses, who may be the devil. Everett convinced his chain gang mates to flee with him in order to unearth his buried treasure before the Tennessee Valley Authority floods his property to make a hydroelectric dam.

On their way, the gang encounters a cyclops, three si-reens with whom they were fixing to fornicate, a guitar player based on blues legend Robert Johnson, and George “Baby Face” Nelson, among other colorful characters.

When they reach Everett’s hometown, they discover that his wife divorced him during his time in prison. Everett had told the boys he was in prison for robbery, but he was actually in for practicing law without a license. And his reason for escaping was not the dam, but his ex-wife’s pending marriage to the advisor the gubernatorial challenger, and textbook racist, Homer Stokes.

Everett convinces his ex-wife to remarry him after he and the boys are offered jobs advising the current governor along with a full pardon. She sends him back to their home to retrieve her old wedding ring. But the lawman waits in ambush and strings them up. As Everett and the boys say their goodbyes to the world, the water comes rushing in from the newly made dam, washing away the lawmen and saving their lives.