Danny Ocean gets his World War II compatriots back together to pull off the ultimate Las Vegas heist—the eleven friends will rob five casinos in one night. 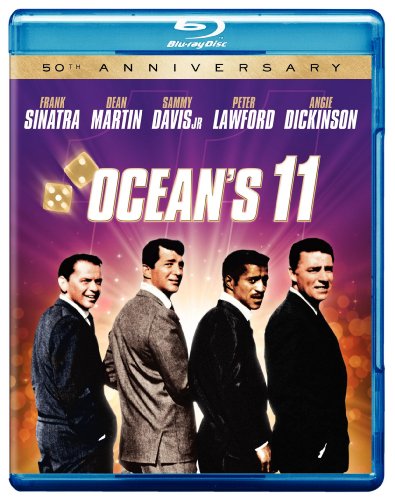 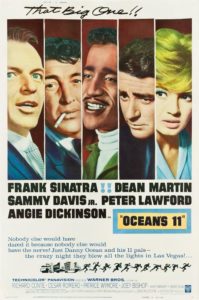 While Sam Harmon (Dean Martin) entertains the ladies in one casino lounge, the others infiltrate the remaining casinos as waiters and other various jobs to case their respective targets. Meanwhile, Josh Howard (Sammy Davis Jr.) goes undercover as a garbage truck driver. Additionally, he helps plant demolition charges on an electrical transmission tower they will destroy to blackout the city. Meanwhile, their electrician, Tony Bergdorf (Richard Conte) rewires the backup electrical systems in each casino to open the cashier cages instead of turning on the backup lights at the right moment.

The night of the heist, as everyone in the casinos ring in the new year to the tune of Auld Lang Syne, the gang blows up the aforementioned tower and Vegas goes dark. The backup electrical systems do open the cashier cages instead of powering the emergency lights, and the men sneak in and steal as much money as they can fit in their bags.

They then toss those bags into their hotel’s trash bins, and go back inside like nothing happened. Once the lights come back on, the thieves stroll out of the casinos with the rest of the crowd. Josh drives his garbage truck over to the casinos to pick up the bags and easily passes through the police blockade for the perfect escape.

While the plan appears to have gone off without a hitch, things start to turn sour when Tony has a heart attack and drops dead in the middle of the Las Vegas Strip. Also in town is an old gangster named Duke Santos (Cesar Romero). He’s engaged to marry Foster’s mother, and when he hears of the heist, he goes to the casino bosses, and offers to recover their money for a price. Once Santos learns Ocean’s in town and his connection to Foster and Tony, he figures out they were behind the theft.

Santos confronts Ocean and Harmon and demands half of their haul. Once he leaves, Harmon forms one last plan to hide the money in Tony’s coffin, and steal back the rest of the money once the body is back in San Francisco—stiffing Santos. Josh sets aside $10,000 for Tony’s widow, Gracie (Jean Willes), too.

However, the new plan backfires when the funeral home director talks Grace into having the funeral in Las Vegas to save her money. It winds up being a very costly one when they cremate Tony’s body along with all the stolen money. Ocean, his gang, and Santos helplessly look on as mourners in the audience.

The film closes with Ocean and his nine remaining members sadly walking down the Las Vegas Strip for a not so happy ending.