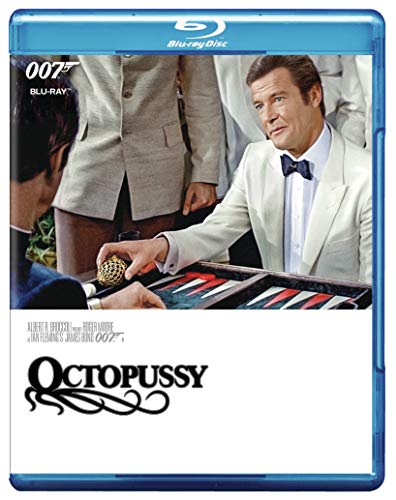 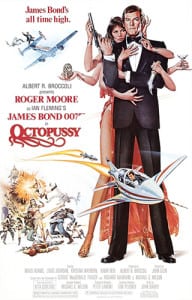 British secret agent 009 is killed for being a clown. He was holding a forgery of a faberge egg. It appears the Russians are selling state jewelry at auction in England. Bond is sent to investigate. This leads him to India, where Bond tracks an exiled Afghan prince, Kamal Kahn. Bond boinks one of Kahn’s henchbroads, Magda, and she steals the Faberge egg from him. Bond, however, placed a tracking and listening device in the egg, knowing Magda would steal the egg.

Kahn, however, is not his own man. He works for a mysterious villain on an island fortress. This villain is called Octopussy. Kahn’s bodyguard, Gobinda, kidnaps Bond and holds him hostage in Kahn’s palace. Meanwhile, Bond escapes Kahn’s palace and listens to Kahn on the device in the egg.

He learns that Kahn is working with a rogue Russian general, Orlov, to smuggle jewelry out of Russia and sell it in London. Kahn used Octopussy’s circus troupe to smuggle the jewels from East Germany into the West.

Bond smuggles himself into the circus and discovers that Orlov replaced the smuggled jewels with a nuclear bomb. Orlov wants to detonate the bomb on an American Air Force base so that NATO thinks one of theirs went off by mistake and will disarm unilaterally so the Russians can invade.

But Bond never lets things go off by mistake, so he leaps into action. Bond chases the circus train to the base and evades the cops by dressing as a clown. He rushes into the tent and disarms the bomb just in time to get a hearty “thank you” from the American General.

Kahn escapes and kidnaps Octopussy. When the carnies chase him from his palace, Bond hops aboard Kahn’s plane and forces it down, just in time to get a hearty “thank you” from Magda.