Peter Gibbons is a computer programmer who despises his job at Initech, and he hates his annoying boss, Bill Lumbergh, even more. His coworkers and friends, Michael Bolton and Samir Nagheenanajar, also hate their jobs but they will soon be laid off in a downsizing of the company. To get some revenge at Initech, the trio plant a virus into Initech’s banking system that siphons money into Peter’s bank account gradually. However, after a glitch in the virus code causes a large sum of money to immediately transfer to their account, the trio must find a way to solve the problem without going to jail. 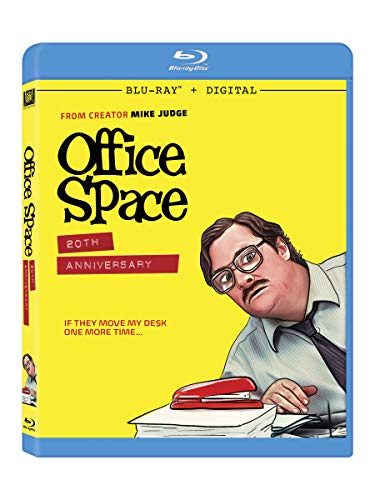 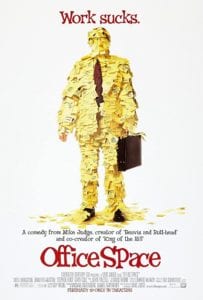 Peter Gibbons works a soulless job as a programmer for a credit union where each day he has to go to work is worse than the day before it, meaning every day is literally the worst day of his life. His girlfriend persuades him to visit an occupational hypnotist. The hypnotist puts Peter in a trance and then hypnotizes him to not care about work any longer. The hypnotherapist dies of a heart attack before he can wake Peter up, and Peter is stuck being permanently indifferent to his job.

Meanwhile at work, Peter’s company is being audited by some bigshot consultants who are there to eliminate some jobs and boost the bottom line. Peter’s practiced indifference gets him recognized as a “straight shooter with upper management written all over him.” Others don’t fare so well, such as Milton, the office ne’er-do-well who is increasingly marginalized and grows a desire to burn the building down with each slight.

Peter makes a new girlfriend, a waitress named Joanna. Joanna works for a large corporate chain of restaurants. Joanna is also floundering in her job, where she is noted to only wear the minimum 15 pieces of flair on her uniform. Peter and Joana bond over their mutual hatred of their jobs.

As Peter’s indifference grows more aggressive, he hatches a scheme with two of his fellow coders to skim tiny amount of money off of transactions at the credit union and to divert it to their own account. The scheme is too successful, however, and they are terrified to learn that they have accidentally stolen hundreds of thousands of dollars in a short time. Certain management will notice, Peter decides to come clean and take all of the blame to cover for his coworkers. He writes a confession and leaves it under his boss’ door. But he’s saved. Milton, it seems, as finally had enough and torched the building out of spite.

Peter finds his peace working a shovel with his blue-collar neighbor, cleaning the ashes of his former office.