In Once Upon a Time in the West, a mysterious stranger with a harmonica arrives and joins forces with a notorious desperado wrongly framed for murder. The two wind up protecting a beautiful widow from a ruthless assassin who works for a railroad kingpin. Everyone’s mysterious pasts are brought to light, and loyalties tested amid gun battles and stylish vistas in this sweeping frontier tale. 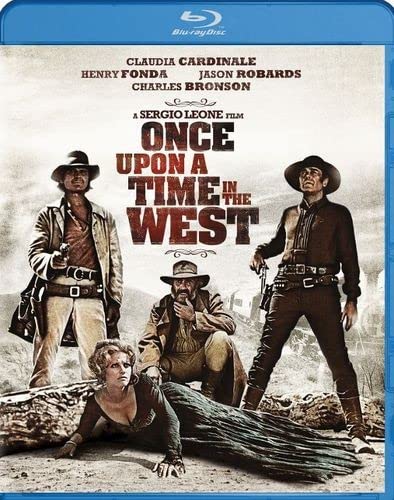 Once Upon a Time in the West [Blu-ray]

‘Once Upon a Time in the West’ Movie Summary 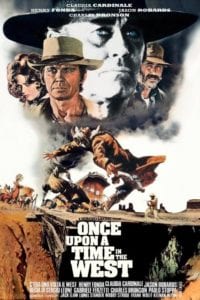 Sergio Leone‘s Once Upon a Time in the West begins at a train station, outside the fictional town of Flagstone, three men ambush a harmonica-playing man (Charles Bronson) as he gets off the train. The mysterious cowboy shoots faster than the three, and he kills them all.

Meanwhile, a railroad tycoon, with crippling tuberculosis named Mr. Morton (Gabriele Ferzetti), hires a killer named Frank (Henry Fonda) to intimidate Brett McBain off his land which plans to build the town of Sweetwater. on Instead, Frank just kills McBain and his three children. Frank then plants evidence that the outlaw Manuel “Cheyenne” Gutiérrez (Jason Robards) committed the crime.

An unknown heiress arrives to town

At the same time, a woman named Jill (Claudia Cardinale) arrives from New Orleans, and reveals to the town she secretly married Brett. She becomes the sole heir of Sweetwater.

At a roadhouse outside Flagstone, Cheyenne meets the mysterious harmonica-playing man, and names him Harmonica. Harmonica tells Cheyenne that he killed three men posing as Cheyenne’s cronies at the train station. While nobody knows it yet, Harmonica has a vendetta against Frank (as does Cheyenne), so the two men form a bit of a bond in earnest.

How can you trust a man that wears both a belt and suspenders? Man can’t even trust his own pants. Frank

Back at the Sweetwater compound, enough construction materials arrive to build a small town which is exactly what McBain intended to do. Jill needs to build a train station there by the time the railroad arrives, and she will be able to keep the land.

Harmonica and Cheyenne are there, and Harmonica explains the Sweetwater situation to him. Cheyenne likes the thought of it, especially since Jill reminds him of his prostitute mother. He wants her to succeed, so he makes his men help build the town.

Greed is the downfall of every man

Morton wants to make a deal with Jill, but Frank’s greed gets the better of him, and he turns on Morton; thinking he can be a successful businessman too. Unable to defend himself because of his disability, Morton has to back down to Frank…for now.

Frank tracks down Jill, rapes her, and then forces her to auction off Sweetwater. At the auction, his men intimidate the other bidders so he can buy the land dirt cheap. Harmonica shows up, and outbids everyone by turning in Cheyenne, and using his reward money for Cheyenne’s capture as the payment.

Frank tries to bully Harmonica into selling him the land for a dollar more than he paid at auction, but Harmonica isn’t intimidated at all. He’s focused on the big prize.

Flagstone’s sheriff arrests Cheyenne, and sends him on a train to a Yuma prison, but Cheyenne’s men board it disguised as passengers, and free him.

Help from an unlikely source

After Harmonica turns down Frank’s buyout offer, he leaves the saloon to find that Morton paid Frank’s own men to kill Frank. Harmonica helps Frank defend himself from the attackers because he wants to kill Frank himself.

Franks escapes the town, and returns to Morton’s personal train, but he finds Cheyenne and his gang have slaughtered everyone; including Morton.

With nothing left, Frank heads back to Sweetwater. At first, he wanted to know who Harmonica was. Now, Frank just wants to kill him. Eventually, the two men find themselves in a one on one duel in the middle of a dusty courtyard. Both men draw; both shoot. One man falls to the ground.

There’s a flashback with a older boy standing standing on his younger brother’s shoulders. His hands are tied, and a noose slung around his neck. The younger boy too has his hands tied, and struggles to remain upright from the weight of his brother on him.

Back in the courtyard, Frank falls to the ground with a fatal gunshot. As he lays there, Harmonica walks up to him, and shoves his harmonica in Frank’s mouth; just like he did to him as a boy. Frank dies there in the dirt; finally realizing Harmonica’s true identity.

Time for a new journey

With his brother finally avenged, Harmonica says goodbye to Jill and leaves Sweetwater. Cheyenne follows, but collapses just outside of the town. Morton managed to fatally wound Cheyenne in his raid on the train.

The parting shot shows a work train arrive to Sweetwater with Jill bringing water to them. Harmonica rides off with Cheyenne’s dead body.

Paramount Pictures released Once Upon a Time in the West on December 20, 1968. Sergio Leone directed the film starring Henry Fonda, Charles Bronson, and Claudia Cardinale.